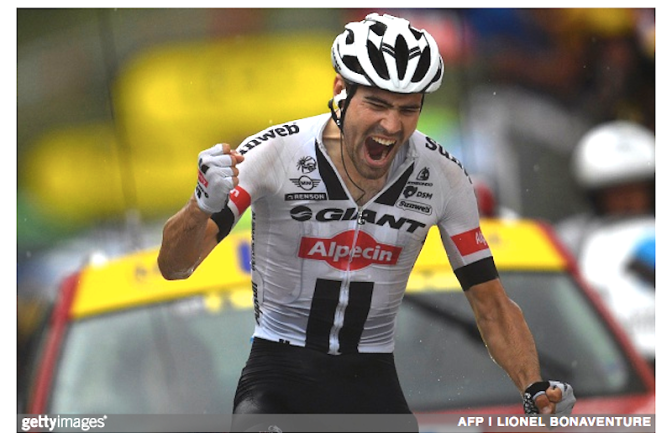 Giant-Alpecin’s Tom Dumoulin rode away from a whittled down breakaway and powered his way up the Arcalis, climbing to victory through the driving rain (with added hail!) that must have left him thinking he was on a driving range. The Dutch powerhouse has now won stages in each of the three Grand Tours, and with his assured ascent of the Arcalis, proved that there’s more to his game than just time trials.

As impressive as Tom Dumoulin’s win was, I am going to tip my hat to Adam Yates (Orica-BikeExchange) for an assured ride with the big men. For a second day running, still sporting stitches in his face from his contretemps with the flamme rouge a few days ago, he pit himself against the main GC contenders and was the only one to take any fight to Chris Froome at the end. Froome has been voracious in his chase for total dominance, so Yates managing to best him in a sprint for the line (an attempt to snatch the yellow jersey) just underlines that this young lad has talent in abundance and a great future ahead.

Alberto Contador (Tinkoff) finally ended his brave and obstinate struggle against adversity on the slopes of the Port de Canto today. He never managed to ride away from the injuries sustained in a Stage 1 crash, which were compounded with a second crash on day two, and has been struggling ever since. Today, it was discovered that Baby Blackbird had developed a fever in the night and during the stage, he made numerous visits back to the Tinkoff team car – although it appeared that his DS largely ignored him as he was cycling beside his window. Eventually, enough was enough for Bert and he climbed off with around 100km of the stage to go, shortly after a word of encouragement and support from Frank Schleck, whose Trek-Segafredo team are rumoured to be signing Contador tomorrow. With a wave and a shrug, Contador climbed into the Tinkoff car, hopefully to recover to top form for this year’s Vuelta.

Looks like it’s going to be a humdinger of a polka-dot battle this year, with Thibaut Pinot (FDJ) and Rafal Majka (Tinkoff) exchanging the jersey each stage. Pinot took the maximum points on the first and third climb of the day to go into the dots on the rest day. Thomas De Gendt (Lotto-Soudal), who has worn the jersey earlier this week, took maximum points on the second climb, proving a fly in Majka’s ointment today. Pinot leads the category by only 3 points over Majka. This one might run and run.

And the heavens opened

You’re hot, you’re tired, your legs are screaming and you honestly don’t even have the energy to tell them to shut up. Then, the heavens open just in time for your ascent of a long and arduous climb. It’s not just rain – and don’t get me wrong, there was plenty of that, coming down so hard that it was bouncing up to get the riders wet twice with the same raindrop. It was hailstones. Anyone who has ever been in a hailstorm knows that those suckers hurt when they hit. So spare a thought for the guys tomorrow morning when they wake up and feel every second of those stages in their weary bones.

Any Porte in a storm?

Tonight’s dinner at the BMC hotel promises to have more tension than a particularly drunken episode of Come Dine With Me. As the race unfolded, Richie Porte found himself riding alongside Chris Froome, while his team leader Tejay van Garderen followed some 30 seconds behind. Perhaps confused by the situation, or maybe lacking the strength to put in a full-blooded attack to try to weaken Froome, Porte fell into a familiar position, riding just ahead of the yellow jersey. Now it may not be easy to put the hurt on Froome when he’s in this kind of form, but if I were Tejay, I would have preferred my wing-man to just sit on the back and do nothing.

One thought on “Tour de France 2016: Stage 9 – Through the storm, Dumoulin takes the day”