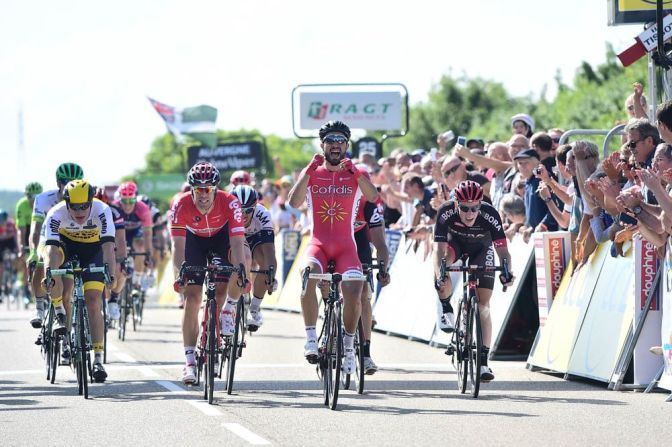 Sprint day at the Dauphine, and my my it’s a murky world amongst the fast-finishers and their lead out trains.. Head-butts, nerves of steel, and burst of gut wrenching speed to finish it off. Best news of the day? The return to racing of Orica-GreenEdge’s Mitch Docker after his horrific crash at Paris-Roubaix: out in the break and looking tache-tastic.

Stage One, Cluses to Saint-Vulbas, 186km

Nacer Bouhanni (Cofidis) boxed clever in the final metres with a late surge off Sam Bennett‘s (Bora-Argon) wheel to claim the win. Jens Debuscheere (Lotto-Soudal) placed second with Bennett holding on for third. Seems we can’t write about a Bouhanni victory without some controversy. This time the sprint trains of Cofidis and Katusha were embroiled in head-butting and other strong arm tactics on the run to the line. Fighting for position is a part of sprinting, but this was too much. Alberto Contadaor (Tinkoff) still in the leader’s jersey.

Couldn’t put it better ourselves….

So good to see Mitch Docker back racing. Killer tache too. #Dauphine

Tuning into the Criterium du Dauphine was worth it just to see Mitch Docker’s glorious moustache. #SBSCycling