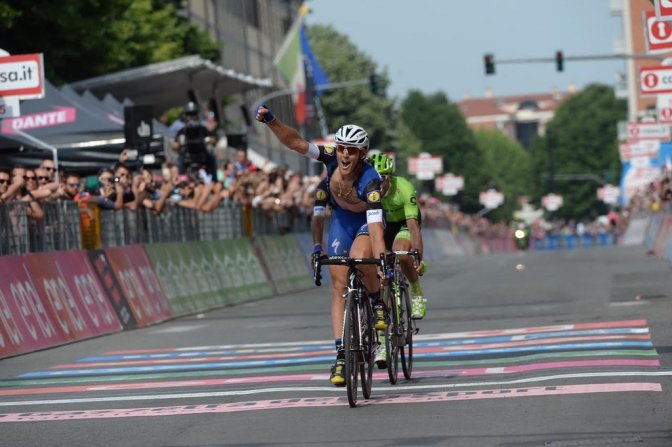 For the fifth consecutive day at the Giro d’Italia, a rider has won one of its stages for the very first time. Today’s stage 18, it was the turn of home hero Matteo Trentin (Etixx-Quick Step), who took victory after escaping into the day’s big breakaway. For the general classification riders, it was a case of the calm before Friday’s mountainous storm, with the pink jersey Steven Kruijswijk (LottoNL-Jumbo) crossing the line alongside the other contenders almost a quarter-of-an-hour after Trentin had given his victory salute.

This victory was Matteo Trentin‘s first at the Giro, though is the third grand tour success of his career to date. Having previously won a couple of stages at the Tour de France, the Trentino native is quickly assembling a thoroughly impressive palmarès. Notable for speaking English with a distinctly Benelux twang, Trentin has spent his entire professional career with Quick Step, whose team manager Patrick Lefevere is certainly reaping the rewards for his faith. This race is only getting better for the Belgian outfit, who have now won three stages on top of holding the pink jersey with three separate riders.

Returning to Trentin, it raises an interesting question about just how good he can get. At 26 years old, he should soon be entering the peak years of his career. Cycling is as unpredictable a sport as any, and as evidenced by the career of the provisional king of the mountains Damiano Cunego (Nippo-Vini Fantini), riders don’t always get better with age. However, there’s certainly reason for Quick Step to be optimistic about Trentin’s future. Matching raw speed with a classics rider’s strength, Trentin could become a serious contender if he attempts an assault at the spring one-day races.

In taking the win, Trentin denied a fellow Trentino talent, Moreno Moser (Cannondale) his first Giro win. Trentin and Moser may have much in common, though they’re not carbon copies of each other. The latter is a slightly punchier rider, and so made his move from the day’s big breakaway on the category two Pramartino climb with just over 20km still to race. It was a strong attack, and the gap initially looked sufficient to last.

But unfortunately for Moser, he couldn’t shake Trentin’s Quick Step teammate Gianluca Brambilla, who could simply sit on his wheel knowing that he’d either get a free tow to the finish, or Moser would be caught by his fast-finishing teammate Trentin. It was the second of the two scenarios that played out, with Trentin surging past the lead duo in the final few hundred metres. Moser crossed the line in a disappointing second place, with Brambilla rolling across in third.