It’s been a while since we’ve done a Tweets of the Week Special but this subject certainly deserves it. It starts with Shane Sutton – technical director of British Cycling – being accused of sexist, racist, ableist and bullying behaviour and it ends with British Cycling as a whole coming under the discrimination microscope and submitting to an independent review of its practices. The conversations swept through Twitter like wildfire – here is just a snapshot of some of those.

Let’s start with this excellent feature from the Guardian by William Fotheringham.

And let’s bear this in mind: everyone has their own experiences of a person. So Dani King might not have experienced sexism or bullying at BC but that does not mean that it didn’t happen to Jess Varnish or others in the programme. The riders who have come out in support of Sutton have ever right to do that – but it’s not like a running tally. ‘Ah, we have 5 riders who support him and 4 riders who don’t so that those four are lying’ or ‘5 for, 5 against – nothing to see here then …’ 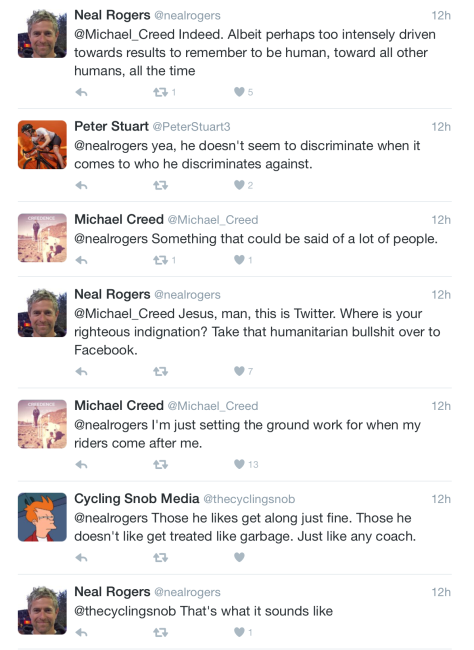 There was a lot of comments about the Australian being a ‘larrikin’ – the definition of which is: an uncultivated, rowdy but good hearted person, or a person who acts with apparent disregard for social or political conventions. For a lot of people, this seems to give Sutton a pass for saying whatever he wants without repercussions, no matter how offensive – he’s just a typical Australian man. Which does a great disservice to Australian men – none of whom I know would ever think of acting and speaking like that. You can be honest and ‘straight-talking’ without using language that demeans, insults and belittles people. A spade is a spade but a disabled person is never a gimp. There’s also a stream of ‘it’s just banter, innit’ – banter is defined as the playful and friendly exchange of teasing remarks. Exchange – so it’s a two-way thing. When it’s a one-way thing, it’s not banter, it’s on its way to being bullying. 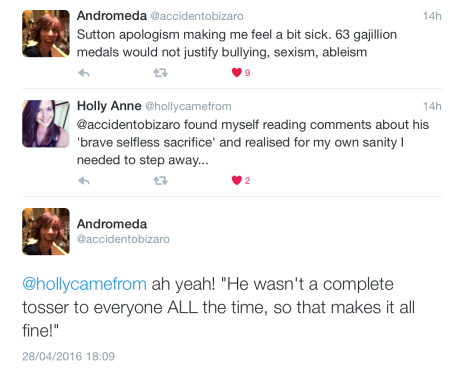 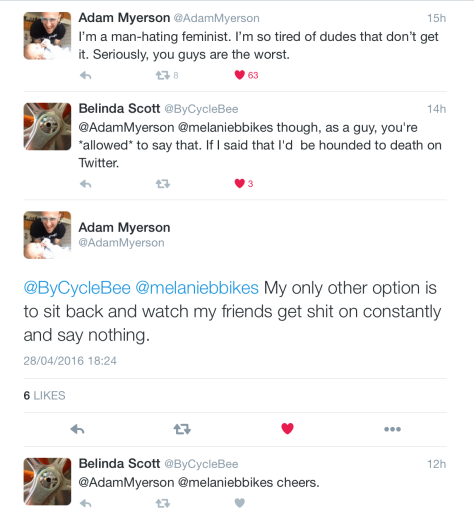 I think John Galloway has the best retort to all those apologists.

The words you use reflect your beliefs. Your beliefs inform your actions. So let’s just look at some of British Cycling’s actions. Nicole Cooke’s Guardian piece is worth reading – it’s not about what he said/she said, it’s about the actions. 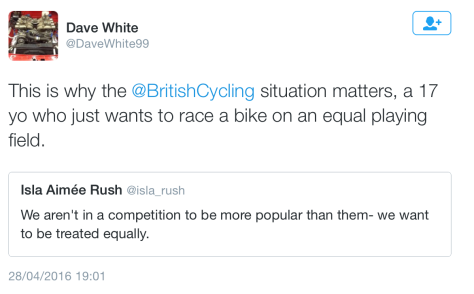 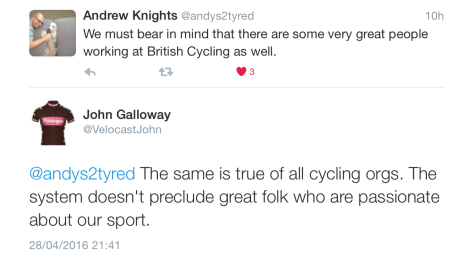 No one operates in a vacuum so where were the other people in a position of responsibility when this was going on? Seems that British Cycling had been informed of the problems and the ‘culture of fear’ for years and yet did nothing. Did the sweet smell of medal success intoxicate them to the point of inertia? 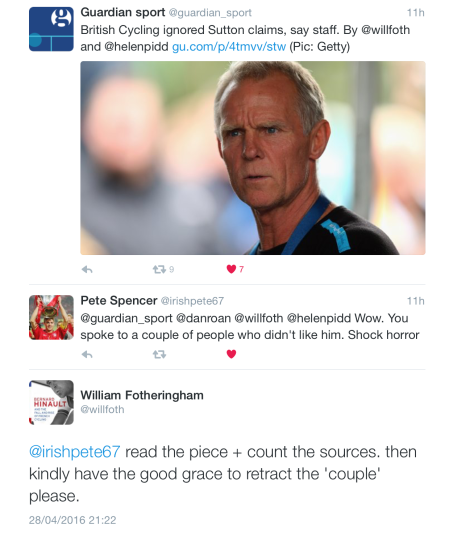 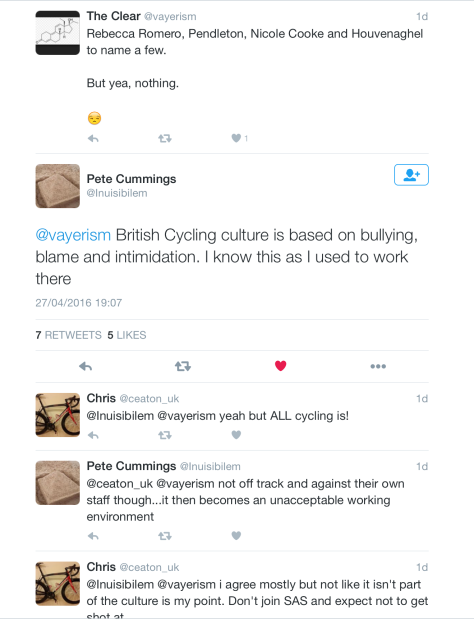 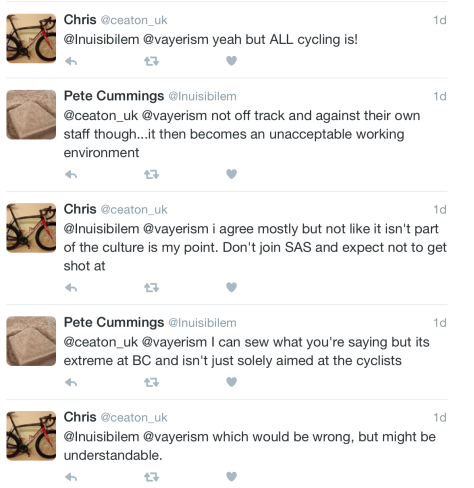 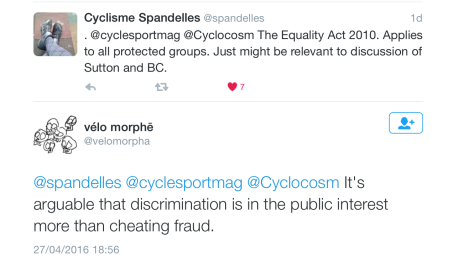 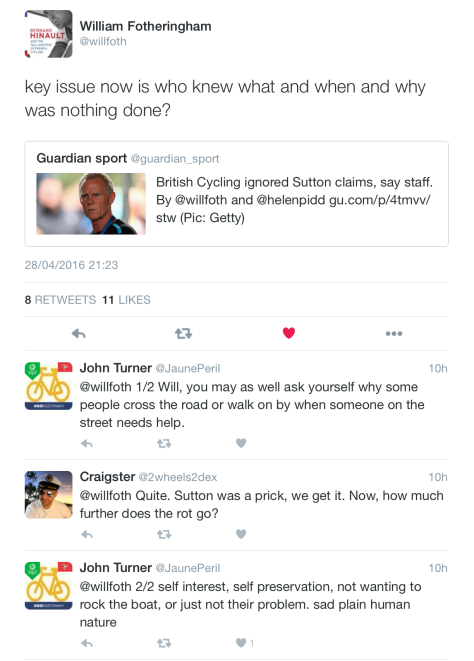 Then along comes Kennaugh

Peter Kennaugh is known as a hothead in the peloton (remember Tour Down Under?) – and he took to Twitter with his thoughts about Emma Pooley questioning Sky’s lack of commitment to women’s cycling. 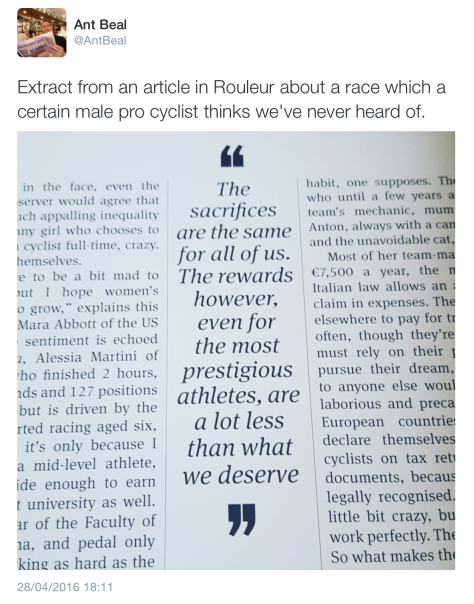 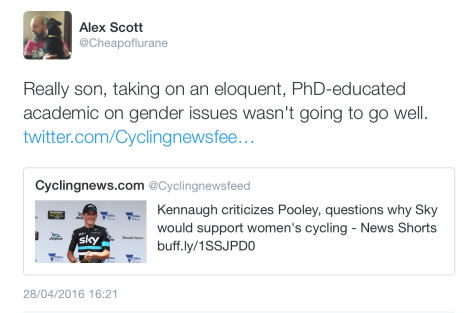 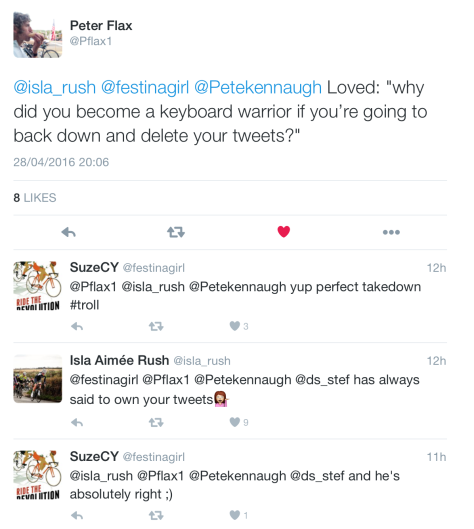 This is going to run and run, especially as the UK Sport independent review board isn’t going to release any information of their findings until after the Paralympics in Rio (that’s September time …) so as not to disrupt the athletes in the run-up to the Olympics/Paralympic Games. Before you go, why not read Accident Bizarro’s Reasons You Don’t Need to Worry about British Cycling and think about these two pictures below.

Seeing women succeed in cycling inspires young girls – it gives them role models that they use to find their own place in the world. Don’t we owe it to them to continue to fight for equal treatment? Shouldn’t we try to make their world better than the one we grew up in? And addressing the hard issues is the only way to do that.

2 thoughts on “Tweets of the Week Special: British Cycling under the microscope”