Famously reported as saying that riding for Sky was like a business while BMC was like a family, I recently took an opportunity to put Steve Cummings on the spot and ask him for the one word to describe his current team, Dimension Data. 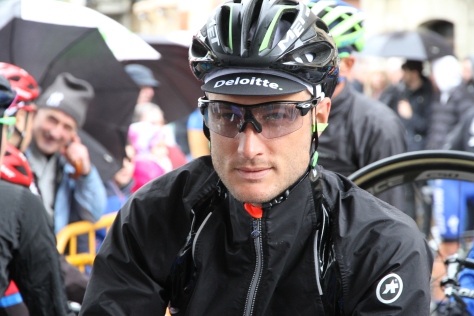 Steve, who is quietly spoken and very modest, took his time to reply, clearly searching for the right words.

I need to get this right. It’s like an adventure. You know, it’s Africa’s first team, we have to remember that and it’s all new for a lot of the riders. There’s a feeling of excitement and not really knowing what to expect. I think the association with [the charity] Qhubeka as well adds a human element that keeps it all in perspective.

Who can forget Steve’s getting the better of Messrs Bardet and Pinot in last year’s Tour de France, fittingly winning  stage 14  on Mandela Day? His recent wins on stage 4 of Tirreno Adriatico and stage 3 of the Vuelta al Pais Vasco were similarly opportunistic. Or were they? I asked him whether they were stealth victories or if he decided beforehand which stages suited his characteristics as a rider?

No, they were good stages for me. I’m really just learning more and more about what I’m capable of and I feel that I’m improving. I’m finding more opportunities than perhaps in previous years. I’m a bit black and white. If I think I can win, I’ll go for it and, if I don’t think I can win, I won’t! I’m either kind of there or I’m not. I don’t know whether it’s a good approach or a bad one.

Personally, I think he should have more confidence in his own abilities and give it a go more often, and I told him so. One of the advantages of being the same age, if not older, than most riders’ mums is I’m unafraid to dish out unsolicited advice!

Given his years of experience on the track and road, I asked him whether he mentored any of the younger riders on the squad.

No, I don’t really say too much. I’m quite quiet but, if they ask something, then I’m willing to offer an opinion. In a way it’s part of the process [of maturing as a rider]. You need to grow and utilise everything and everyone around you. Some of that comes from within and I’m a pretty approachable guy.

Yes, you are Steve but don’t hide your light under a bushel.

One thought on “Steve Cummings: The Peloton’s Quiet Man”