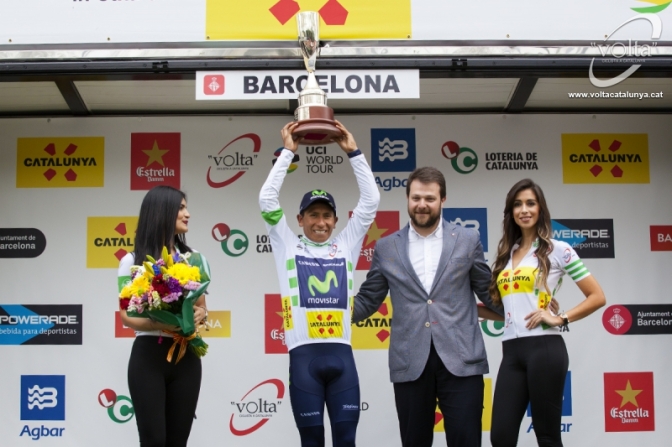 Movistar’s Nairo Quintana, who rode strongly all week, took the leader’s jersey on the fourth stage and never really looked in danger of losing it, despite a veritable galaxy of stars snapping at his heels. A mere 7sec back was Alberto Contador (Tinkoff), while Dan Martin (Etixx-QuickStep) took a second on today’s intermediate sprint to dislodge Richie Porte (BMC) from the podium and step up into third place.

The spoils on stage 3 for Dan Martin (image: Etixx-Quick Step)

As usual, there were plenty of candidates for this honour. I could have chosen the overall victor or maybe Nacer Bouhanni (Cofidis), who won two stages. But the title goes to fellow-Brummie, and the rider who soared to victory and into the race lead on stage three, third-placed overall Dan Martin.

Martin was winless last year but a move to Etixx-QuickStep, after nine years at Slipstream Sports’ teams, has galvanised him and sets him up for the Ardennes Classics, just over the horizon. His dislocation of Porte to make the podium today was smart tactics, but it was the way he fashioned his stage 3 victory at La Molina that most impressed me.

Accelerating from out of the leading group, with just 500 metres remaining on the final steep ramp to La Molina, he soared past and left behind Contador and Quintana, to name just a few of the top climbers in contention for a stage victory. Post-race Martin said:

I knew this finish and what helped is that it was similar to the one in Valenciana, Alto de Fredes. In the key moments, I stayed at the front, but I was relaxed all the time. There was some headwind on the climb, so it was important to time the attack to perfection on that steep part of La Molina. 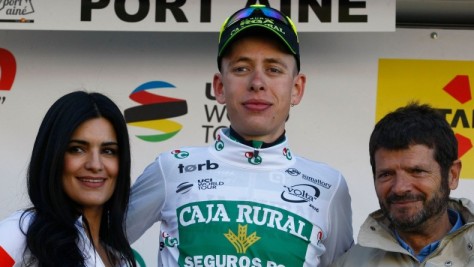 You cannot have failed to notice fresh-faced 21-year-old Lancashire lad Hugh Carthy (Caja-Rural) hanging with the best on the mountain stages, finishing ninth overall and bagging the best young rider jersey. A second-year neo-pro who joined the Spanish ProConti outfit after winning 2014 Tour of Korea where he propelled himself into the lead with victory on stage 7’s summit finish, while riding for British Continental outfit, Rapha Condor JLT. Previously, he’d most notably won the best young rider’s and KOM jersey in the Tour of Japan. Last year, he finished 9th overall in the US Pro Challenge, wearing the best young rider’s jersey for three days. His form has been slowly building this season during which, according to the team’s website, he’s aiming to learn and improve. No doubt, he’ll be hunting for a WorldTour contract for 2017.

Think its safe to say Hugh Carthy will be riding for a World Tour team next season, been awesome in Catalunya

What does it all mean?

A galaxy of stars took part in this race leading many to speculate beforehand on whether this would be an initial and exciting salvo before the main show in July. However, the Tour is still three months away and for two of the main protagonists, Quintana and Chris Froome (Sky), this was their first race on European soil and one shouldn’t read too much into their differing forms. Contador, a rider unaccustomed to coming second, was coming back from a cold while Joaquim Rodriguez, a rider who hails from Barcelona, consoled himself with winning Best Catalan. But frankly, it’s too early to predict what might or might not come to pass in July.

That said, there were plenty of highlights. It was nice to see Bouhanni bounce back from the disappointment of a lost chain, and possible victory, in Milan-San Remo. Equally, it was good to see Lampre-Merida record their first WorldTour victory of the season with Davide Cimolai‘s win on stage 6. It was one of the most emotional victories earlier this week when Belgian Thomas de Gendt (Lotto-Soudal) took his first victory in three years, just a day after the Brussels bombings. He went on to take the overall points and KOM jerseys. BMC, too, will be pleased by the form of their two key riders, Porte and Tejay van Garderen who finished fourth and  fifth respectively, boding well for their joint-leadership in July.

2 thoughts on “Volta a Catalunya Review: Nairo Quintana at a canter”