If you would have told me before the start today that we would have MSR’s first French winner in 21 years since Laurent Jalabert, I would have laughed out loud. However, that is exactly what happened as FDJ’s Arnaud Demare came past Sky’s Ben Swift and Lotto-Soudal’s Jurgen Roelandts in a bunch sprint to win the 107th edition of Milan- Sanremo!

The rider of the race has to be our winner Arnaud Demare, who had the panache to chase back from a crash around 30km from the finish (the same crash as Michael Matthews) and still put himself in the perfect position to win. Demare’s persistence, attention, and grit enabled him to get back toward the front as the peloton hit the bottom of the Poggio and the race came back together. With Demare’s stage 1 win in last week’s Paris-Nice and FDJ becoming quite tasty team time-triallists (1st inLa Méditerranéenne and 3rd in Tirreno-Adriatico’s prologue), the Francophiles in our midst (um, just about everyone…) are getting very excited for the Grand Tours. 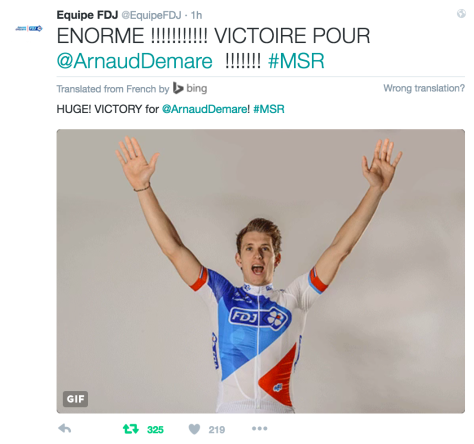 The last 40kms of the race were marred by crashes large and small as the pace picked up and teams fought for that elusive position at the front before the penultimate climb of the Cipressa. Many of the crashes seemed to include riders from the Cannondale squad as well as a few of the race favourites – in fact, we’re wondering if there were any Cannondale riders who weren’t in a crash today.

Orica-GreenEDGE favourite Michael Matthews was one of the unlucky ones as the pace picked up. His effort at getting back into the peloton for the finish showed a lot of heart, but his jersey showed a lot of blood and road rash and the chase back expended too much energy for him to be a contender in the bunch sprint.

The most tragic fall came from Etixx-Quickstep favourite Fernando Gaviria, who touched wheels and hit the deck after the final bend in the last 100m or so, putting both world champion Peter Sagan and Fabian Cancellara off their stride and arguably costing them a top 10 place. Gaviria showed his disappointment by crossing the finish line in a flood of tears with his teammate’s arm around him. We can only wonder what would have happened if he’d stayed upright.

Tales of the unexpected

One of the things we love about MSR is that it’s very difficult to predict a winner, the weather, or anything else. Here are my three tales of the unexpected:

Tales of the expected

While the unexpected is common at MSR, some things never change. Here are a few: