Oh, but hasn’t it been a week? We had headbutts (in two separate races!), stage-winning plastic bags and boys who can’t change their shoes fast enough.

After the trials and tribulations from last season, Marcel Kittel came out of the blocks racing with his new Etixx team. And, holy moly, his hair was still magnificent.

Kittel kept getting the better of Mark Cavendish – in fact, Cav has never beaten Kittel in a bunch sprint when they were both in contention. Ever. 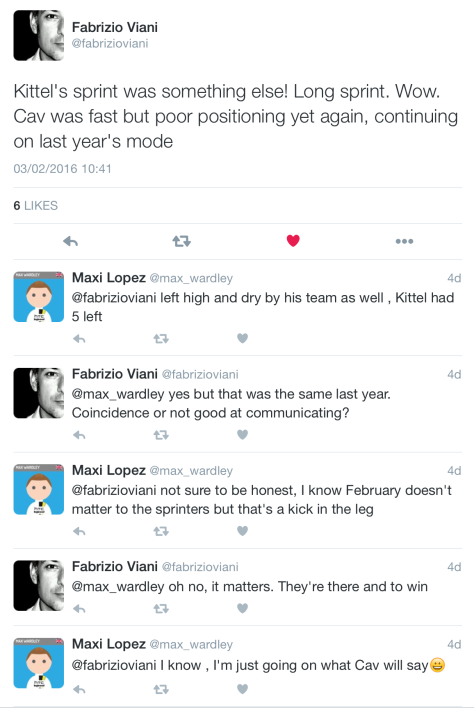 Cavendish tells the press what he thinks of Kittel’s return. “Very very difficult to beat”:  10-0 now. And 9 of those weren’t after “a year’s holiday”.

But it wasn’t all sprints. Here’s what Fabs, PhilGil and ArgoSunGod looked like at the Hatta Dam finish. #FullGas 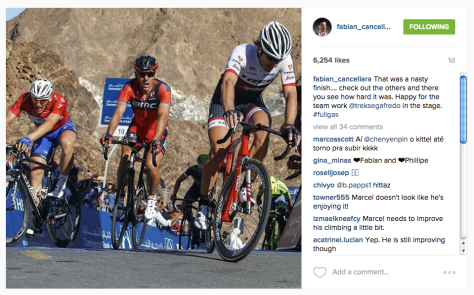 But let’s get to the hair.

But it wasn’t just about Kittel. There was that headbutt from Cav, after the tunnel crash that left Kittel blocked and Cav far behind, he took his frustrations out on a CCC rider next to him in the sprint.

Here is Cav with Christopher Walken. 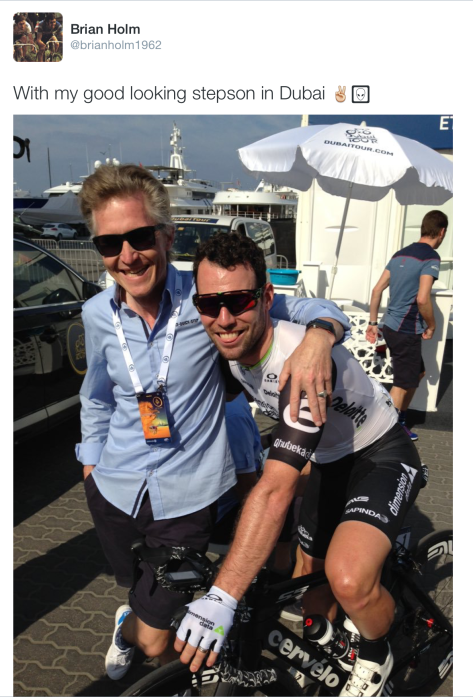 Elia Viviani won the headbutting stage and made this really odd comment afterwards. It’s a rare interview when an athlete speaks so candidly about his ability.

Meanwhile Bradley Wiggins was in the race. He’d said before the start of the race ‘not to expect anything from me’. He was true to his word.

And now for our picture round. 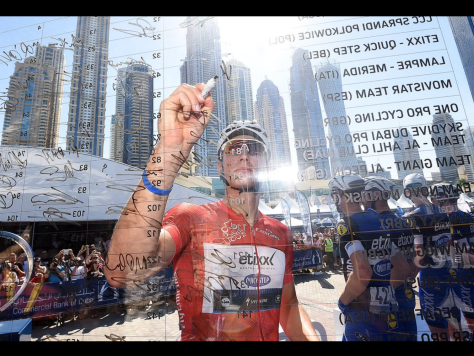 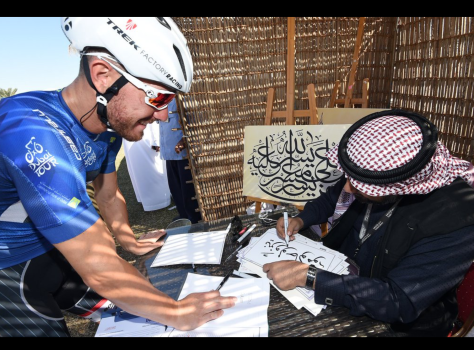 In these shoes? I don’t think so

The Tour of Qatar started yesterday and Etixx-QuickStep did not line up because they weren’t invited.

Looks like Peter Kennaugh found a guy nearly as hot-headed as he is.  There were rumours of some post-stage head butting (was Cav there?) but nothing official.

And a friendly selfie at the very end.

Stijn Vandenbergh has been a stalwart teammate for his entire career and his day in the sun came on Sunday. A plastic bag tagged along for the ride. A popular win all round. 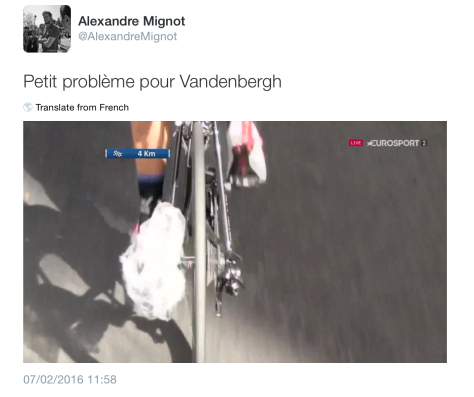 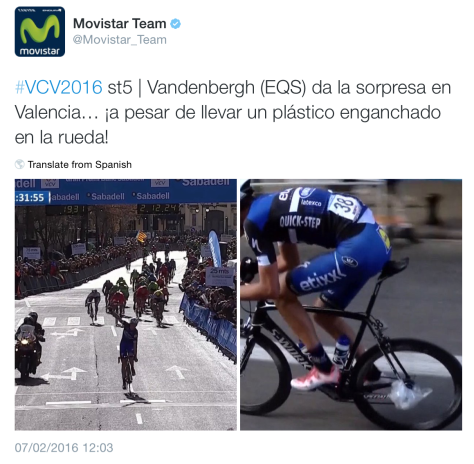 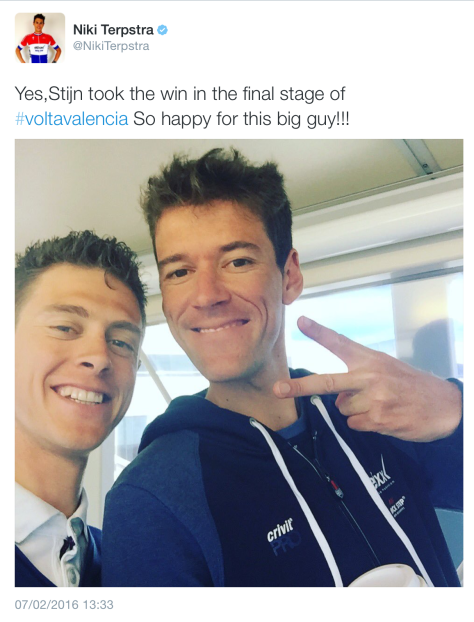 What kind of tennis team has 9 players?

Last from the cyclocross – couldn’t resist putting this fabulous picture in. 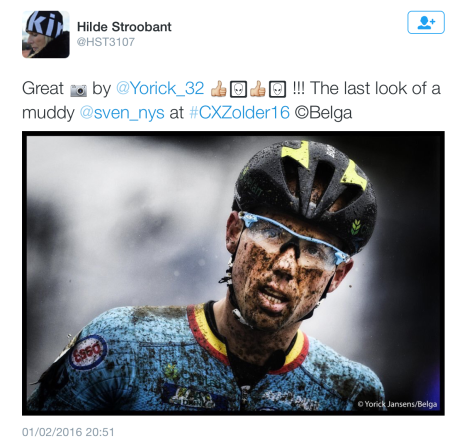 Love is in the air.

One thing is for sure … there’s nowhere to hide in a skinsuit. 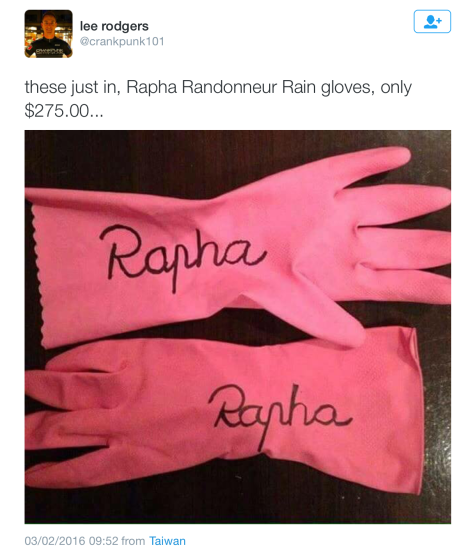 The glamour of cycling – spinning in a parking garage.

That famous tennis team did well …

Don’t feed him after midnight.

Katusha with yet another positive.

I’m finding it hard to believe this is actually Chris Froome’s body – he has thighs in this picture! That can’t be right …

The photographer for FDJ’s new rider portraits was obviously channelling Jean-Paul Sartre (one of the toads of history, by the way): “Life begins on the other side of despair.”

“Do you think that I count the days? There is only one day left, always starting over: it is given to us at dawn and taken away from us at dusk.” 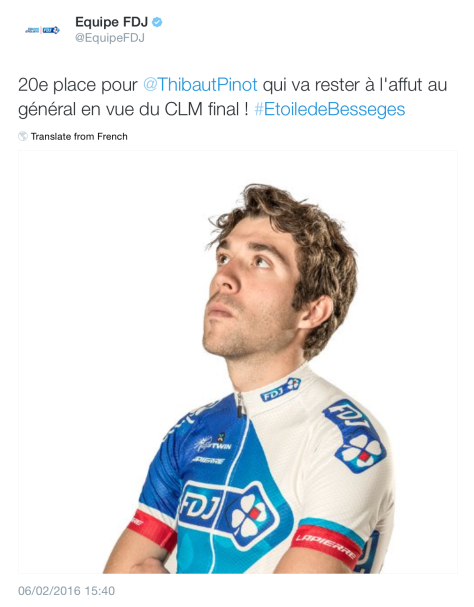 Obligatory Fabian posts. Get used to it. It’s his last year. He’ll be here a lot.

This photograph was taken on the day that I met him – I MET HIM. Funnily enough, he sort of had that expression when I started talking to him. Kind of “I’m sure I renewed that restraining order, but maybe if I don’t make any sudden moves, she’ll go on her way …” 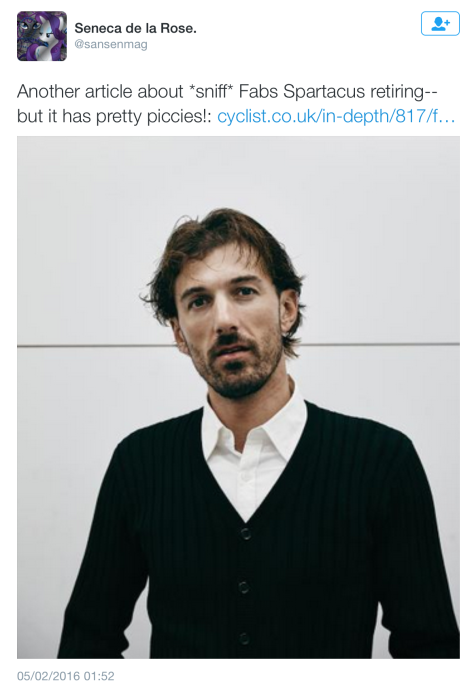 Everytime I see this picture, I think the MightyDegs is trying to fix a laserjet printer.

While Giant teammate Chad Haga has finally been able to do a bit of spinning on his own. Which is fabulous news. 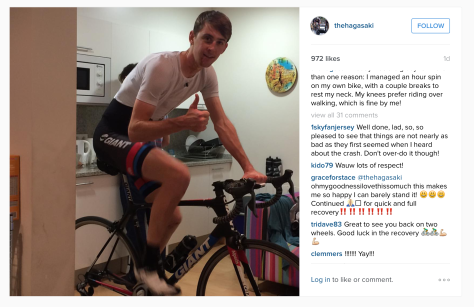 There seems to be some sort of cloning programme going on at the Cannondale camp. 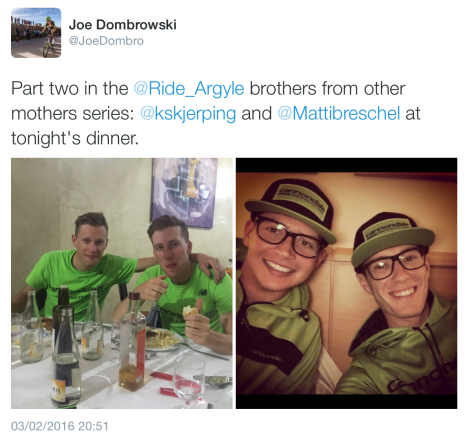 Oh Bernie. We just got you back from the Death Star and you’re out with a broken collarbone. Heal up soon! We need you in the peloton!