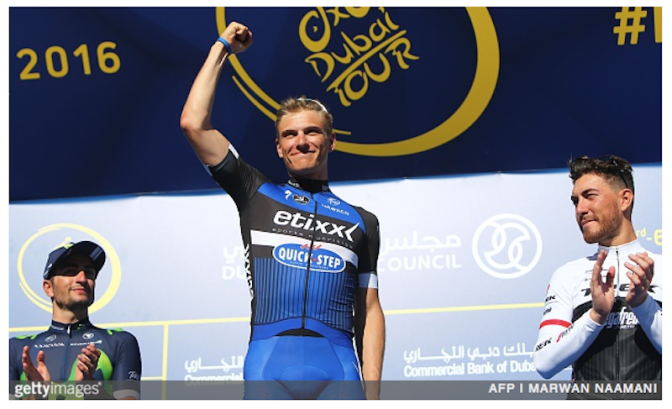 We’re finishing up our races this weekend and here are your Final KMs from yesterday’s Dubai Tour, Etoile de Besseges, Herald Sun Tour and Volta a la Comunitat Valenciana.

The final stage of the 3rd annual Dubai Tour was all about two riders: Giacomo Nizzoli (Trek-Segafredo) and Marcel Kittel (Etixx-QuickStep). With only 6secs between the two in the GC and a parcours that screamed sprint, it all came down to second place. If Kittel won with Nizzolo in 2nd, Nizzolo won the whole shebang; if Kittel won and Nizzolo came in third or worse, the ArgoSunGod would win the whole kit and kaboodle. In the end, Kittel bossed the sprint, with Elia Viviani and Mark Cavendish trailing in his wake.

In addition to the stage and the overall win, the ArgoSunGod also took the points jersey; Nizzolo and Juan Lobato were second and third, respecitvely. Soufiane Haddi took home the best young rider’s jersey.

United Healthcare’s John Murphy took the stage win with Niccolo Bonifazio (Trek-Segafredo) and Steele von Hoff (ONE) sweeping up the rest of the bonus points at the finish. Peter Kennaugh (Sky) easily held onto his leader’s jersey, with teammate Chris Froome 13secs behind and Jack Bobridge (Trek-Segafredo) holding onto third at 31secs back.

It was the Queen Stage and with a 22% gradient on the final climb, it was going to be excited. A two-pronged attack by Astana started the fireworks on the climb but race leader Wout Poels kicked away, was first on the descent and crossed the finish line solo. Poels’ Sky teammate Benat Intxausti and Movistar’s Jon Izaguirre rolled in 23secs after.

With one stage to go, Poels has a pretty tight grip on the leader’s jersey, with Luis Leon Sanchez (Astana) 46secs behind and Intxausti in third at nearly a minute down.

Angel Madrazo (Caja Rural-Seguros) earned himself a stage win (and looked pretty stoked about it!), with Evaldas Siskevicius (Delko Marseille Provence) and Dieter Bouvry (Roubaix Metropole) 2 and 4 secs behind respectively. Direct Energie’s Sylvain Chavanel stays in the leader’s jersey going into the final stage, with Lotto-Soudal’s Tony Gallopin just 2secs behind him. FDJ’s Arthur Vichot is in third, 9secs back. Could be a rip-roarer of a finish, with those tiny time gaps.