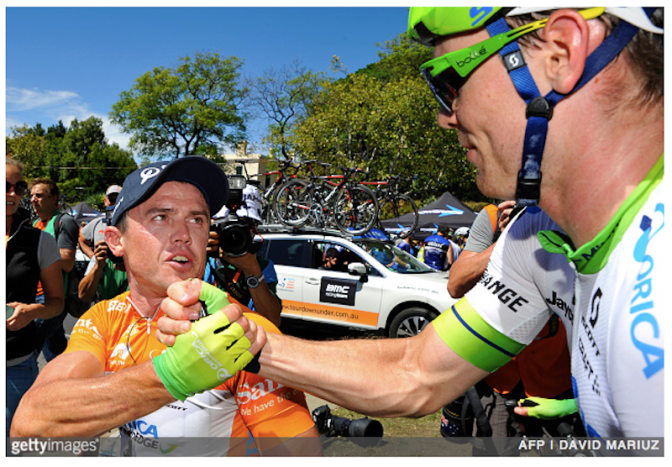 Simon Gerrans (Orica-GreenEdge) picked up his fourth Tour Down Under victory (2006, 2012, 2014, 2016) by strategically picking up bonus seconds wherever he could, cemented them with two back-to-back stage wins and followed those up with a heroic ride up Willunga Hill on the queen stage. Performances on that stage also catapulted new BMCer Richie Porte (his third consecutive victory here) and Sergio Henao (Team Sky) onto the final podium.

There were a few riders I could have chosen as my Rider of the Race – obviously, Simon Gerrans, the first rider to achieve four wins in this race or his Orica teammate, hotshot sprinter Caleb Ewan, who topped and tailed his TDU with stage wins, as well as the People’s Classic. But I went for a more personal choice.

Contacts at Cannondale had told me to keep an eye out for 29-year-old former middle-distance runner Canadian Michael ‘Rusty’ Woods, who had impressed last year at the Tours of Utah, Gila and Alberta while riding for a continental squad. He announced his arrival in the WorldTour when he pushed himself into the spotlight on stage 3’s Corkscrew Hill. The commentators were scrabbling to identify the only rider able to follow Henao over the summit.

In an article in Velonews, Woods said:

The surge of adrenaline, knowing that I was at the front, and Phil Liggett doing commentary, hearing the chopper on top, and everyone screaming my name. I watch that on TV and fantasise about that, and now it’s happening. It’s crazy.

He went on to finish third again on stage 5 and was fifth overall. Not a bad start to his career at Cannondale!

What about Tinkoff’s Jay McCarthy? He took his first WorldTour victory with a powerful finish on stage 2 and pulled on the ochre leader’s jersey and finished the TDU by winning the best young rider’s jersey. Although Jay has been with Tinkoff since 2013, they’ve slowly but surely been nurturing the 23-year-old rider (he finished third overall in last year’s Tour of Turkey). A strong time-triallist with a useful turn of speed, after his performance this week, he’ll no longer be off the radar!

One thing that made us go oooooooh

The best thing about the Tour Down Under is its superb organisation. European tour organisers could learn a lot from the way the South Australians organise their Festival of Cycling, which includes both a men’s WorldTour and women’s internationally ranked race, plus loads of activities for fans all week.

While not everyone has the luxury of a single venue host, it was the way the organisers ensured rider and spectator safety while still allowing significant interaction between the two and the excellent (and accurate) results and communication service, which was much appreciated by the media pack, that made this week such a success.

I spotted Sir Gary Verity at the race and he told me that he’d attended the TDU back in 2014 and took away a number of ideas that he replicated for the Tour de France Grand Depart in Yorkshire and the orgnisation of the Tour de Yorkshire. Imitation really is the sincerest form of flattery!

Header: Australia’s Simon Gerrans (L) is congratulated by teammate Michael Hepburn of the Orica Greenedge team after stage six of the Tour Down Under cycling race in Adelaide on January 24, 2016. AFP PHOTO / DAVID MARIUZ — IMAGE STRICTLY FOR EDITORIAL USE – STRICTLY NO COMMERCIAL USE / AFP / DAVID MARIUZ

One thought on “Tour Down Under: Simon Gerrans has the fourth”