With the new season comes the triumphant return of Tweets of the Week! We won’t leave you again until, well, the end of the 2016 season. But let’s not think about that. This week, we have Etixx hijinx, spidey senses, Cannondale Scout Camp, some kit chat and some rip-roaring national championship rides.

It seemed to all be happening down under this week, with the Australian National Championships – and the rides were magnificent. If this is any indication of how the season is going to pan out, we’re in for a real treat.

First up, the new Aussie TT national champion, Rohan Dennis. First up, a nice little shot with new teammate Richie Porte (more on him in a mo). And who is that just behind Rohan? Why, none other than TT specialist (and generally lovely guy) Marco Pinotti. Was he giving the boys tips for the TT? I suspect so. 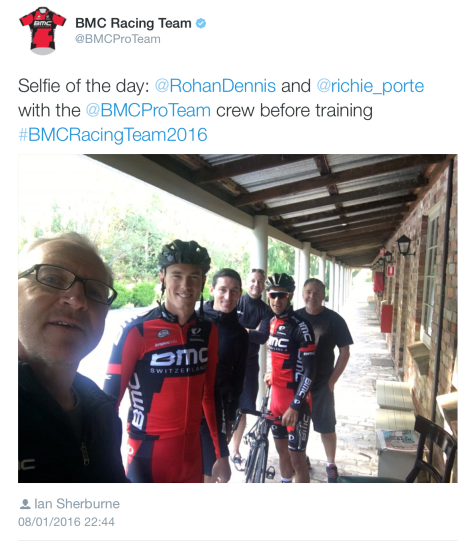 I can’t remember a podium with such big smiles from everyone. Rohan put the hammer down and beat Richie by a good 38secs. The other big smile is from Avanti’s Sean Lake, who clocked in 1.34 down to take third. 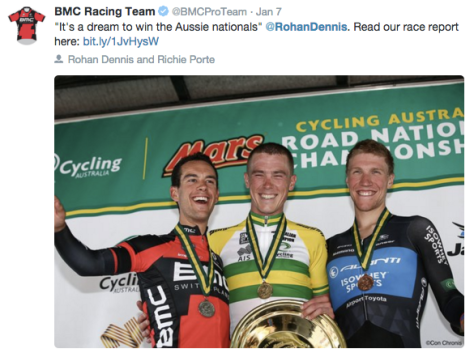 For all his hard work, the young Mr Lake gets trapped in a Dalek. But he’s still happy.

There’s enough nougat in that giant Mars bar to drown a rat. If you were so inclined.

Looks like it’s impossible not to wear a gigantic smile when one dons the green and gold. Here is the Women’s TT National Champion, Katrin Garfoot. 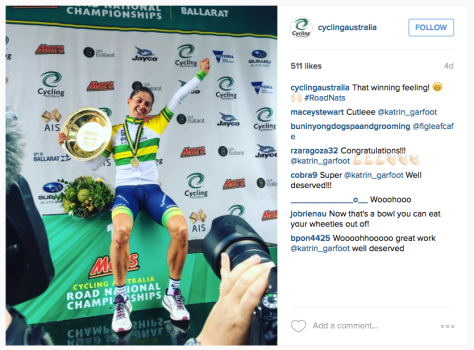 Okay, BoBo might not have been Jack Bobridge‘s nickname this morning but it sure as hell is now! Richie Porte had been tipped for the title but BoBo put the turbos on and he scorched the competition to take a well deserved solo win. From the reaction on Twitter, it was a very popular result indeed.

The mighty BoBo has the strength of more than 10 men. 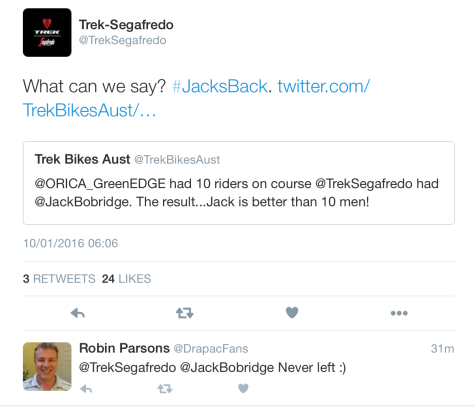 I’m liking the fact that the photographer captured BoBo’s reflection in his big gold plate. 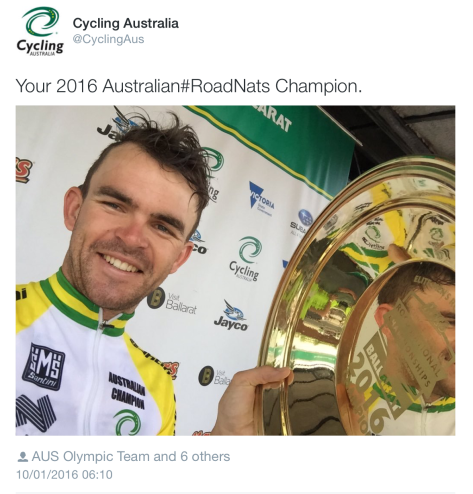 “Ah, now that I am the king of all the land, I shall pose majestically and contemplate my year of jubilee,” is perhaps not what he is thinking. 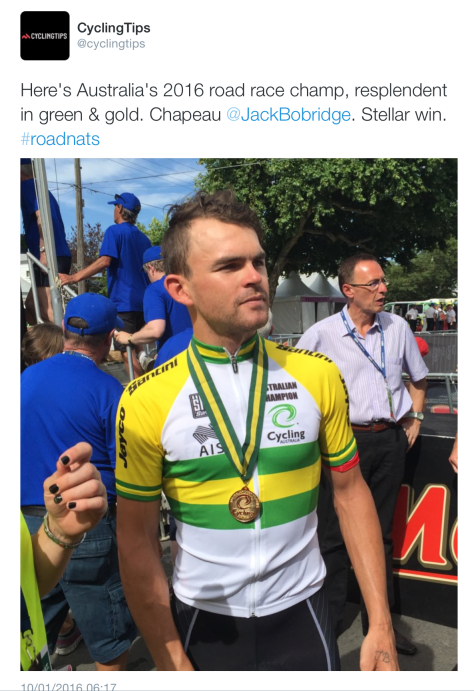 Seems he won everything with that ride. He didn’t leave anything for anyone else. Like I said, he scorched ’em! 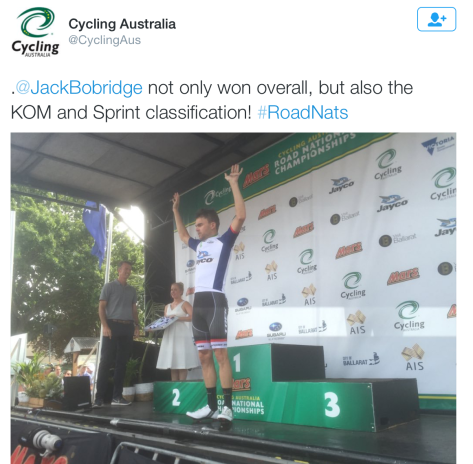 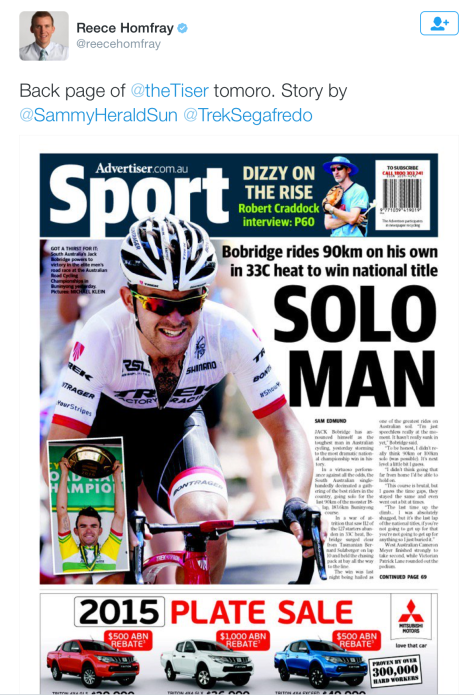 Cameron Meyer came in second – and as he says, a great start to the season for Team Dimension Data (or MTN-Qhubeka for those of us who just can’t let that go…). We’re hoping for great things from that team this year.

And it’s another Avanti rider for third – and another gigantic smile. Patrick Lane looks exhausted but thrilled. As he should be – he was one of the few to even finish!

Bridie O’Donnell – who is about to attempt the Hour Record (go!) – puts the race in perspective for us. Out of the oodles of riders who started (oodles being the new official way of saying I can’t be bothered to count them up), only 15 finished the race. Think about it – from oodles to fifteen. Boggling, ain’t it?

It was an Orica-GreenEdge win in the women’s road race with Amanda Spratt taking the honours. 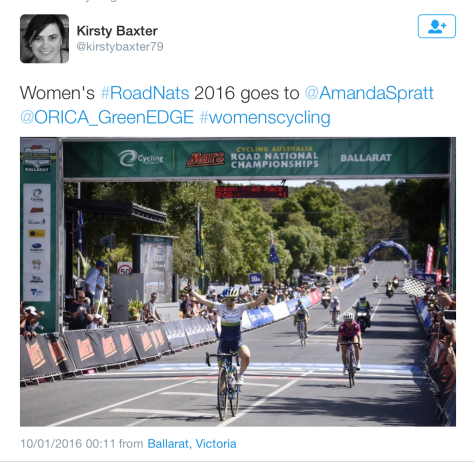 Ruth Corset and Rachel Neylan finish up the podium. All in all, a rather exciting championships!

Some new kits are better than others and certainly better than before, especially in the case of Katusha. And it’s not black! From the strange city skyline-like jersey from last year that was, frankly, a hot mess, comes a real gem. Red (which will pop in the peloton against all that black!) and a K that is kind of a hybrid between the Cyrillic K and Yu. Please see helpful diagram below. (Hey, you don’t get information like this from the Johnny-come-lately Tweets-imposters!)

But no matter what it is a hybrid of, it sure is bolder than a bold thing from bold town. We like it.

And while Cannondale have stuck with the argyle (and why not?), they’ve ditched the black on the jersey and have gone for Hulk Green. Or lime. Or lime sorbet. Anyway, it’s green. And it too will pop in the peloton against all that black. That’s a good thing. 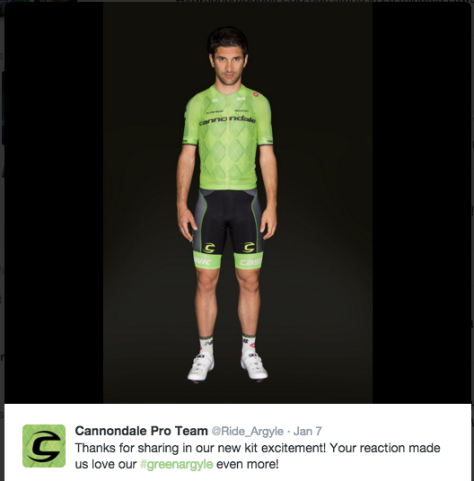 Midge informs me that she doesn’t like the neckline – she prefers more of a collar – while Fiona is just plain annoyed.

The bloody banding on the Team Sky kit. The front is blue, black and white – the Estonian flag. Although it’s a touch more cyan than the flag. So there you go.

“Gee, Joe, do you think we can roast weenies and marshmallows tonight by the campfire while Vaughters is telling us ghost stories?” “Sure, Pierre! That’s a no-brainer!”

I think Liz Miller won Tweets of the Week with this gem.

Those of delicate sensibilities should look away now (and scroll quickly) as Nico Roche has been a snack for spiders again. Hospitalised (just a precaution) and everything. Yikes!

Etixx has a changed team this year – what with Marcel Kittel and Dan Martin joining. Okay, that’s, like, two, but you know what I mean. It feels a different team.

It’s gone all moody with these black and white, high contrast, photos. Makes Tom Boonen look a bit sinister, almost like some sort of Bond baddie.

It might be time, Tony, but with a team that includes Boonen, Niki Terpstra, Zdenek Stybar, etc etc, you’ll be lucky to get a look in on the big cobbled races.

See what I mean about sinister? 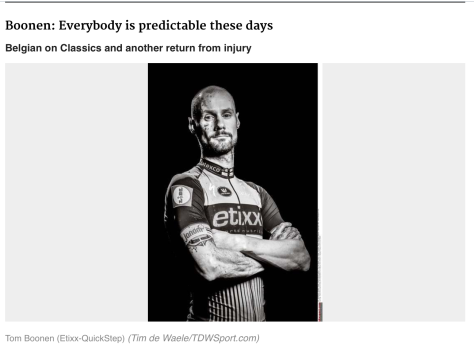 But as Cillian Kelly points out, Tom has a selective memory …

Translation: swipe left. BTW the ArgoSunGod is looking all Dolph Lundgren in that picture.

Unsure about that reverberating electric blue.

Hair askew – except for Boonen – oh, and Kittel.

This was up for discussion. 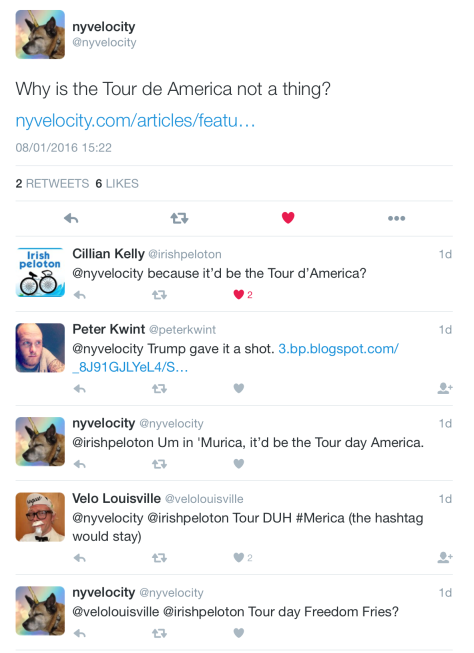 Can’t have a Tweets of the Week without our good friend Dan Wuori, King of Social Media™.

Look up, people! Look UP! And wave!

This can’t be good for aerodynamics. And if Rapha did do pirate eye patches, it’d have an off-centre thick stripe down one side. Maybe in cyan blue. 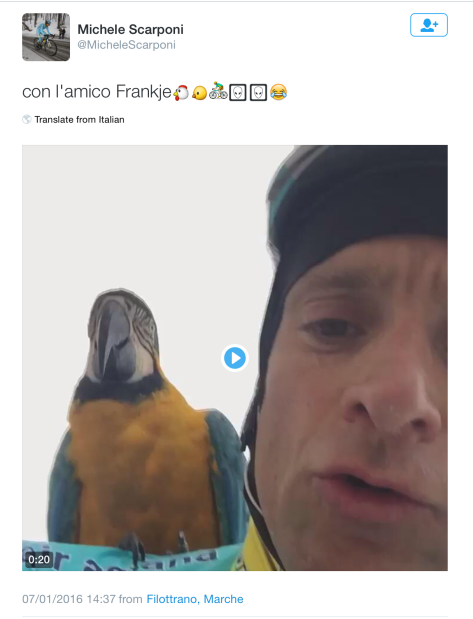 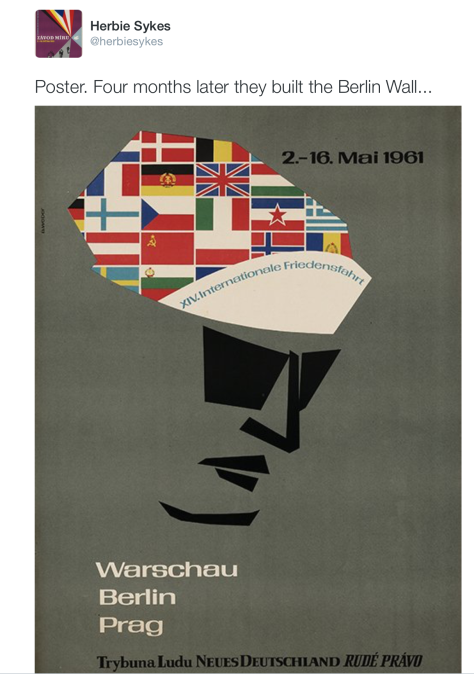 Some problems on the road.

Coulrophobia is the word you’re looking for.

First Tweets of the year – have to have the ladies favourite! Hey, Bernie, how you doin’? 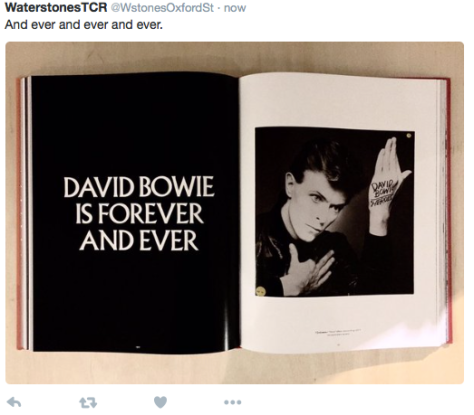