This year, I asked five of my favourite photographers to pick five photographs each to make a virtual Advent Calendar. We kick the festive season off with Marshall Kappel. I find Marshall’s vibrant, saturated colour bordering on the hyper-real, his monochrome photographs luscious in their deep blacks and snowy whites and his style so individual, I could pick out one of his photographs on a magazine cover from a mile away!

A kiss good luck before entering hell… Damien Gaudin and his wife moments before the start of Paris-Roubaix shot from inside the team director’s car. 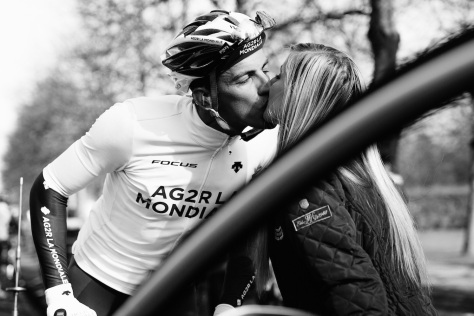 “Time really does fly. Only yesterday I was gearing up for the excitement of Paris-Roubaix and making maps of where I’d sleep and shoot during the Tour. Now it’s winter and time for training and reflection… I started 2015 with an amazing exhibition in partnership with Rapha at the Rapha Cycle Club in NYC, spent the Classics in Northern Europe shooting for Rouleur and Simpson, became a UCI-approved driver in Albertville and finally shot with Ag2R and Lotto-Soudal during the sunny days of the Dauphiné.

“I kicked-off the Tour with another exhibition at Look Mum No Hands! in London and then headed to Utrecht to let the fun begin. I shot for Rapha at La Course by Le Tour de France and then sought out wonderful and more obscure end-of-season races like the Giro dell’Emilia in Italy for Peloton Magazine. And, somewhere in between, I saw Sagan become World Champion in Richmond and spent a beautiful week in Croatia with Tinkoff-Saxo.

“As I sit here writing now… it’s only 150 days until Paris-Roubaix… time to get moving!” [Granted, he did write this at the beginning of November, so time is really ticking now! – Ed]