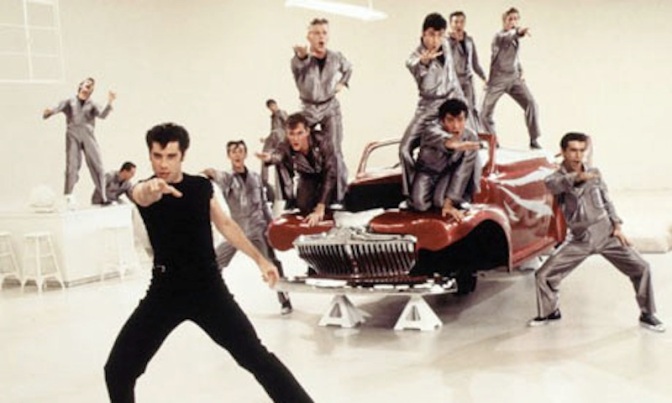 With the end of the road racing season, tweets have been a bit thin on the ground so this week’s column is just a few of the fun things I’ve seen in the past fortnight. We have Peter Sagan‘s magnificent hair, The Mighty Degs as Samurai bowman, a Giant fan day and Nico‘s wedding.

Grease is the word

I’m becoming obsessed with the quality of Peter Sagan‘s hair. It’s like a mane! Slicked back though, it’s all very Danny Zuko.

While at the UCI Gala in the desert, Peter looks like Judd Nelson a la Breakfast Club and Daniel Oss is the spitting image of a very young Tim Curry (pre-Rocky Horror). Manuel Quinziato just looks marvelous.

Am I wrong? No, I am not! This is just uncanny, the resemblances.

However, moving swiftly on, here is Peter, super casual, at the Giro d’Italia route presentation a few weeks ago with a very dapper Alberto Contador. 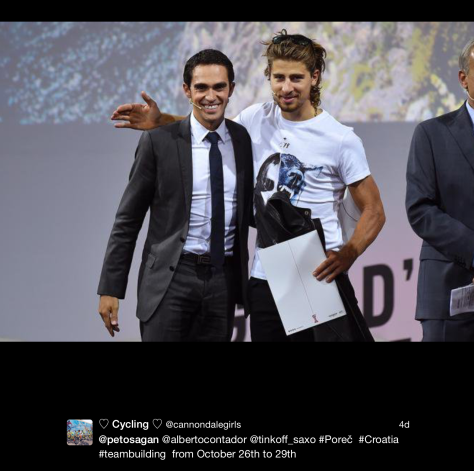 And I know more than a few female fans who would like to see Peter under their Christmas tree in December. He’s looking very happy, these days, isn’t he? 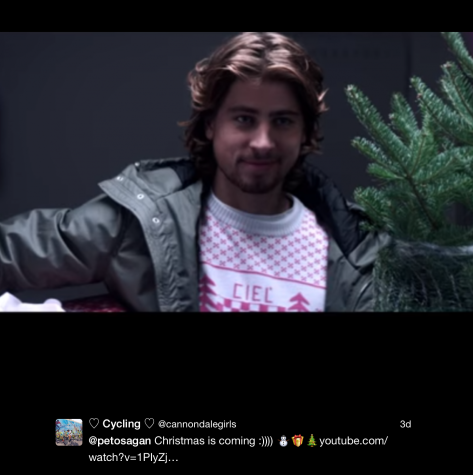 What is a Twitter mirror? I have no idea but Koen de Kort seemed to be using it to good effect at the Giant fanday a few weeks ago.

There was a great turnout – both of fans and of riders – and everyone looked like they had a magnificent time. 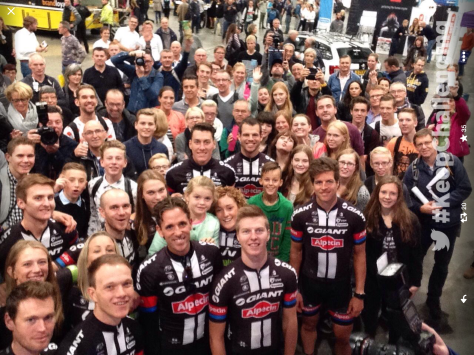 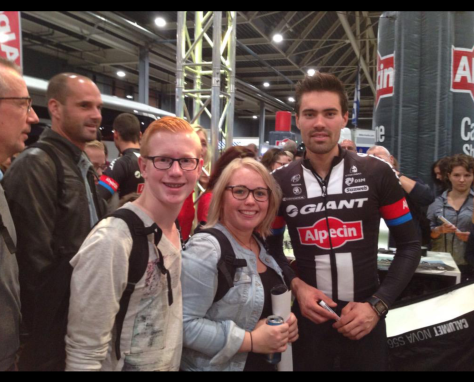 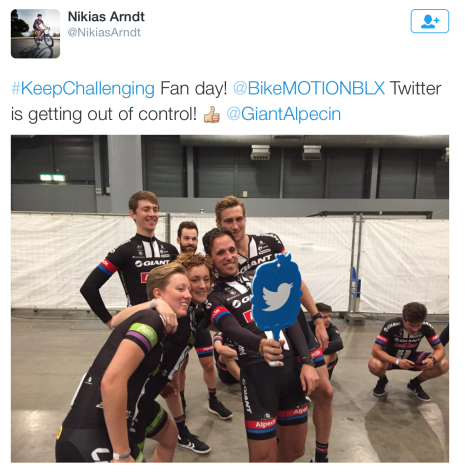 And fast forward to Japan

One of the last races in the season is the Japan Cup and it always looks like the riders (and the fans) have a great time. We’re sticking with the Giant theme for a moment as the Mighty Degs™ shows his archery prowess. Note that the photos are from our good friend, Wei Yuet! So great to see his work again! 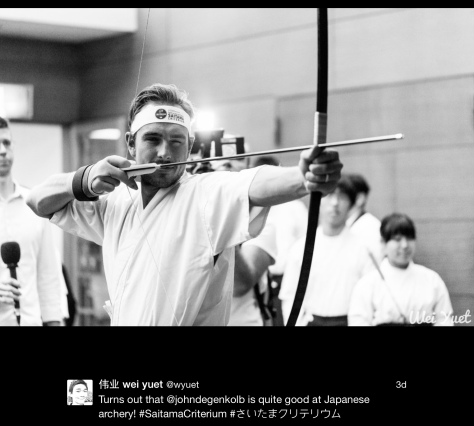 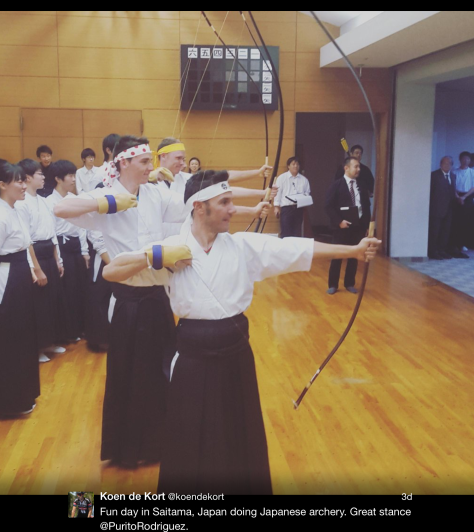 I just love this poster so much.

The Japanese fans put such an effort into their work – and it’s greatly appreciated by the recipients. 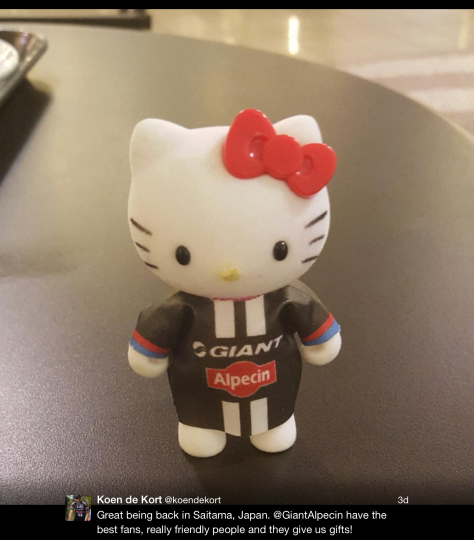 And of course, Fabs was back to race (I’m disappointed there were no pictures of him in archery gear …). This picture is my iPhone lockscreen at the moment! 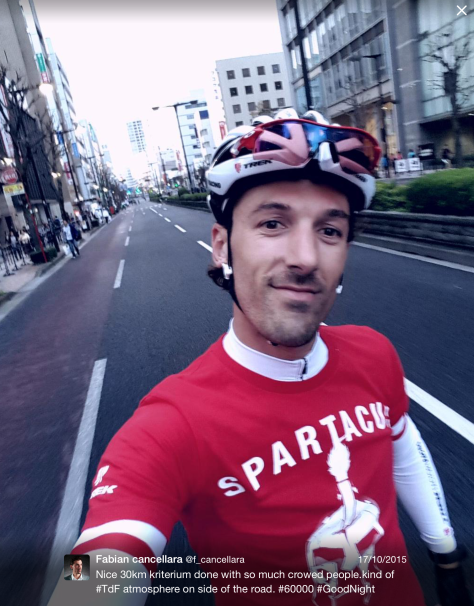 From one favourite to another, Juan Antonio Flecha and Ashley House were at the Revolution Series this weekend. Both were as friendly and accessible as ever – and we can’t wait to see them back on Eurosport next season.

It was Nico Roche‘s wedding last week. A hearty congratulations to the happy couple. It looked like they all had a fun evening.

Maybe not Grease, but certainly some sort of rockabilly Stray Cats-like vibe going on with Mick Rogers.

Getting ready for Rio?

Personally, I never would have thought Pippo and Matteo Trentin were best buds – the things you learn on Twitter! But seriously, channelling Duran Duran or what? 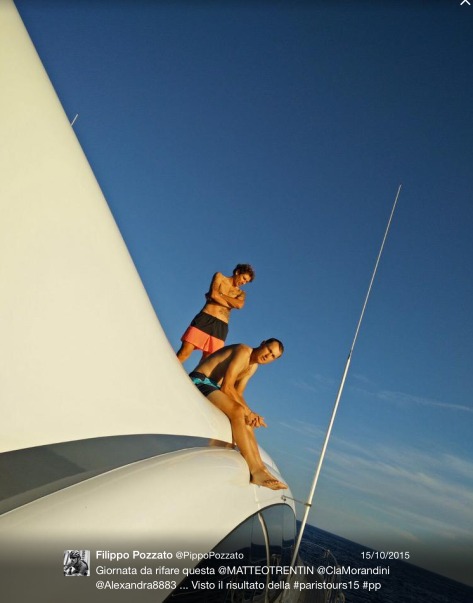