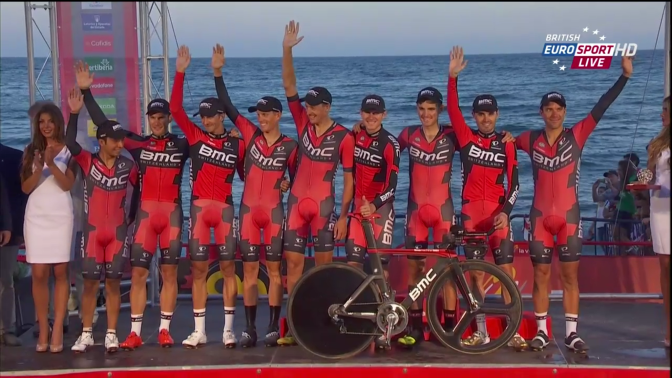 World team time trial champions BMC took the bull by the horns and stormed to victory along 7.4km of stunning Spanish coastline from Puerto Banus to Marbella, just pipping both Tinkoff-Saxo and Orica-GreenEDGE to the top step of the podium by the narrowest of margins. Although the stage was neutralised as far as the individual times were concerned, the first of their five riders over the line, Slovakian Peter Velits, will wear the leader’s red jersey on tomorrow’s stage.

BMC chose the perfect tactic for the narrow, twisty course, choosing to drop four of their riders early and then pushing for the line in a flat out effort at the end. Tejay van Garderen said after the stage:

When we’re the world team time trial champs, we have to do the stripes proud. It’s a tricky course but in the end, the guys stepped up and did us proud.

Team of the day

An unusual and somewhat controversial team time trial surely demands a similar choice for team of the day.  Our choice today is the utterly fabulous Eurosport Vuelta Extra presenting team of Ashley House, Juan Antonia Flecha and Laura Mesegeur. Their professionalism combined with an easy onscreen manner is a joy: it really feels like welcoming much loved friends back into our living rooms. Podium bouquets and kisses for all three.

1. A bad case of the neutralisation blues. I love a team time trial, and so I was expecting to be a little disappointed when I found out that this one was going to be neutralised. Many teams such as Astana and Sky did indeed opt to play safe on the tricky course, perhaps preferring to save their legs for tomorrow’s summit finish. Although I think maybe Europcar misread the percentage gradient in the road book and took it extra easy as a precaution.

However, I was surprised and thrilled to see some of the lesser known time trialling teams deciding to seize an opportunity for a stage result. Stand up and take a bow Caja Rural-Segouras and Lotto NL-Jumbo  for riding with such determination and panache. It seems you can’t take the competitiveness out of a bike racer: for instance, both Orica-GreenEDGE and Tinkoff-Saxo could legitimately have preserved their resources for the fight ahead, but I LOVED that they went for it.

2. What a beautiful course. It may have caused a furore and I’m sure the riders didn’t have time to notice it, but that pathway to Marbella provided the perfect setting for the opening stage, and the harbour wall at Puerto Banus was a stunning backdrop for the starting ramp.  Who wouldn’t like to stroll along there and stop for a sangria?

King of the Mountains leader: not awarded