On a day when the break finally got away and stayed away, it looked like a French contingent would be battling it out for stage honours. But it was Steve Cummings who took advantage of an existential crisis between Thibaut Pinot and Romain Bardet to fly by them in the final 2km and take a popular stage win for African wildcard squad MTN-Qhubeka on Mandela Day. 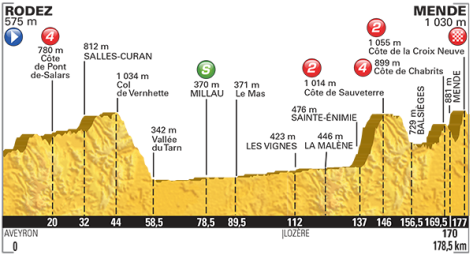 Rider of the day

MTN-Qhubeka said they wanted to do something special today. And they did – in the form of Steve Cummings. The yellow jersey group allowed a rather large break full of quality riders to get away, including Peter Sagan, Romain Bardet, Greg van Avermaet, Rigoberto Uran and Thibaut Pinot. The two groups rode an average of five minutes apart for the entire stage until they hit the final 10% climb. Bardet made the first attack, getting a gap almost immediately, before Pinot bridged up to him.

The climb may have been steep but it wasn’t long and once the road flattened out at the 2km mark, the two Frenchman decided to play cat-and-mouse. Little did they know that a lion was behind them who roared right past them before they knew what was happening. Their slight hesitation before setting about the chase – and with Cummings going at full speed and cornering way better than them – meant that the black-and-white stripes comfortably won the day.

It was a win that had meaning on a few levels. First and foremost, it was the stage that fell on Nelson Mandela Day – as precious to a South African team as Bastille Day is to a French team. Second, this is the first Tour de France that MTN-Qhubeka have ridden, having been selected as a wildcard team. Their part of the deal was to animate the race. Well, I think we can safely say that, with Daniel Teklehaimanot‘s polka dot jersey and this stage win, MTN-Qhubeka have performed better than a few of the WorldTour teams. Their success in this Tour is great publicity for their charity, hopefully leading to more contributions to their cause. Third, it was one of the few wins this Tour that was almost universally popular with fans.

1. Jim Ochowicz must be feeling pretty silly. BMC’s team manager called for the end to Grand Tour wildcards. As reported in VeloNews earlier this month, he said this on the subject:

I think MTN-Qhubeka have disproved this fairly comprehensively.

2. Rider abuse. Richie Porte was punched by a spectator yesterday, then today Chris Froome said that he had urine thrown at him during the stage. I don’t care how much you might dislike Sky, Froome, Porte or any one of the other teams or riders, physical violence is never justified. I wonder what those people would think if they were punched, had urine thrown at them and had to run the gauntlet of verbal abuse being hurled at them while walking through their workplace. Do you want to know the quickest way to kill this sport off? Carrying on with this crap.

3. GC shakeup. All the top ten lost time to Chris Froome again today, after an attacking battle up the final climb. Quintana and van Garderen have swapped positions, as have Contador and Thomas, and Nibali and Gallopin. At this point, it looks like only Quintana can threaten Froome – by all accounts, he’s waiting for the Alps – but it’ll be a big ask, considering the well-oiled Sky machine. But the real battle might be between van Garderen and Valverde for that final podium position.