It was an eventful second week of the Giro d’Italia, to say the least. We had Richie Porte‘s Orica assist (Wheelgate), Chris Froome suggesting that Roger Federer man up (Selfiegate) and the seismic reaction to Juan Antonio Flecha‘s haircut (Curlsgate). We also have Alberto Contador bossing Astana, breakfast with That Boy Phinney and much, much more.

It doesn’t look like Richie Porte can catch a break when he’s a GT team leader. And the second week of this year’s Giro will surely be one that he hopes to forget. It all started with an Aussie wheel change. 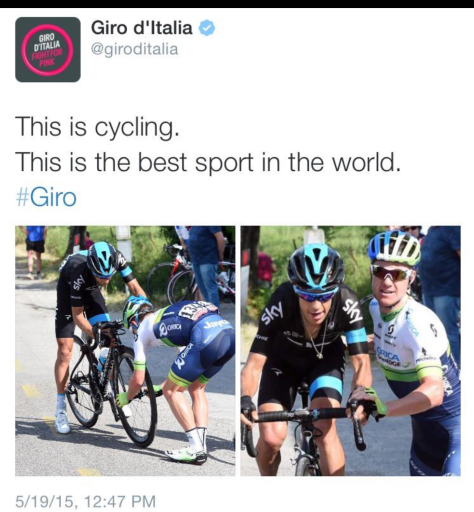 However, this Aussie wheel change was also an illegal change according to the UCI rules. This is what the rule says:

Porte and Clarke were both fined and penalised two minutes. That wasn’t a big deal for Clarke but it pretty much buried Porte’s chances of making the final podium. The reactions from the Twittersphere was pretty much half people who felt that the UCI were heavy-handed and those who didn’t. 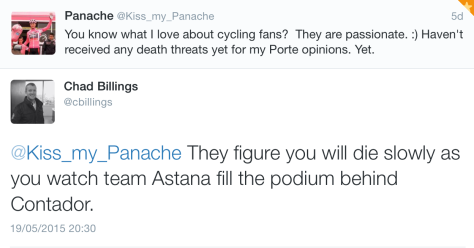 You know all those conspiracy theory documentaries? Surely this could provide quite a lot of material for an hour special. “Who was the Team Sky member just watching at the sidelines?” “Why would two Orica riders help a rival?” “And who will sleep in the motorhome now?”

Team Sky tried to harness the outrage of twitterers by launching the #SupportPorte hashtag to try to pressure the UCI to rethink the penalty. It didn’t work. The penalty stood. 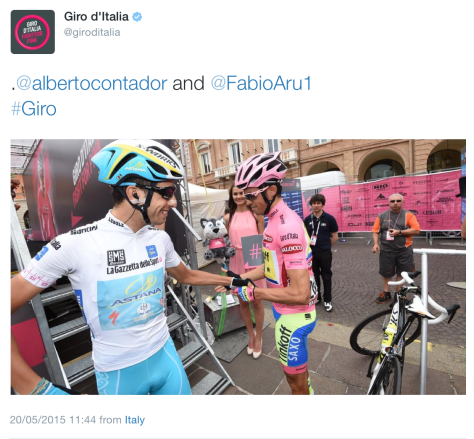 It just went from bad to worse for Porte – he crashed on Friday and hurt his knee, then he bombed in the TT. Sunday’s stage saw him lose something absurd like 27 minutes. The motorhome was going to get a new occupant as he went home on Monday.

Kiryienka won the TT and Konig was riding strong. But he didn’t look like he knew what the hell was going on. Or if he could jimmy the lock on the RV if Richie refused to hand over the keys. 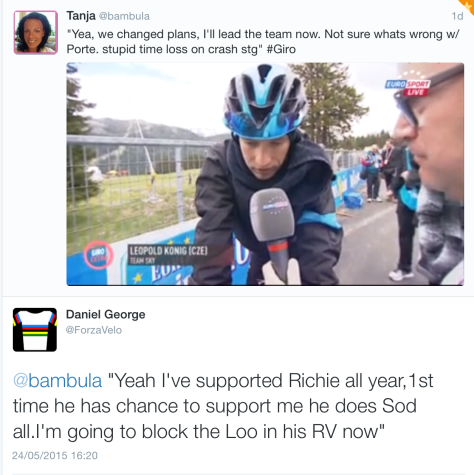 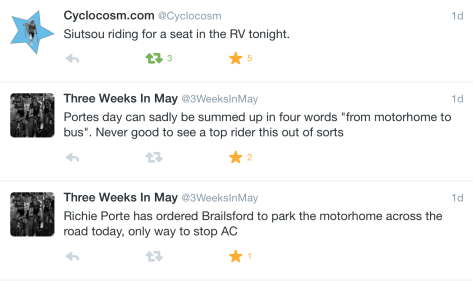 Meet the new boss, same as the old boss

Contador didn’t have things all his way this week – except that he did, really. Fabio Aru (aka Marge Simpson) was able to nick the maglia rosa from him, due to his being caught behind a crash 3.2km from the finish on Friday, but he limited his losses by jumping on a teammate’s bike and riding like a Baby Blackbird out of hell. Porte was also involved in the crash. He didn’t limit his losses.

This is what Bertie looks like, out of pink. 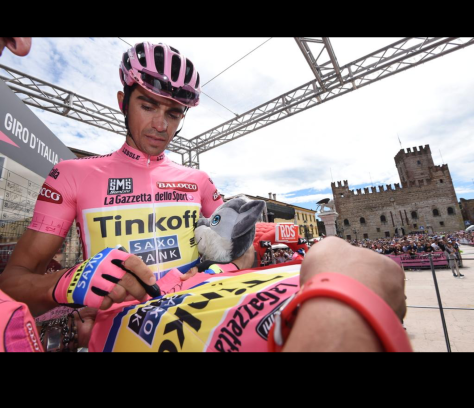 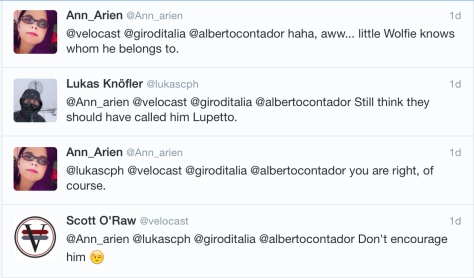 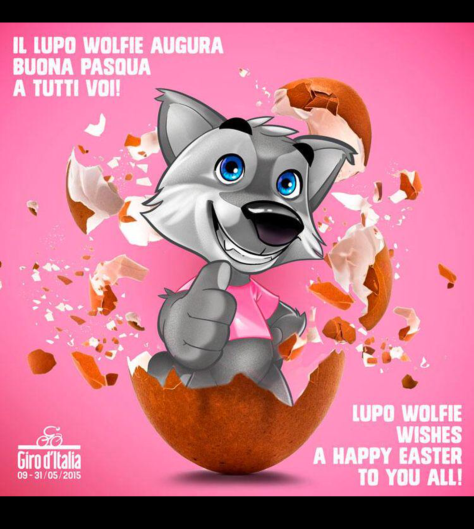 I wonder what’s going through his mind with a look like that on his face. 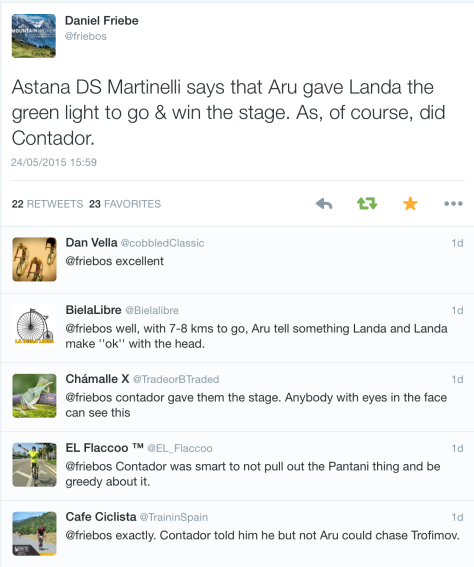 This is what Aru looked like in his maglia rosa TT skinsuit. Heavens. Those nasal strips really don’t do him any favours.

In the world of sports and selfies, riders have been dealing with dickheads with smartphones for some time now. But during the French Open, a fan outfoxed security to get on court and try to get a selfie with Roger Federer. The Swiss star was appalled.

Chris Froome put into tweets what a lot of cycling fans were thinking.

Which didn’t go over very well with Sergiy Stakhovsky, a Ukrainian player. He has since deleted his tweet but not before a dwuori screengrab. 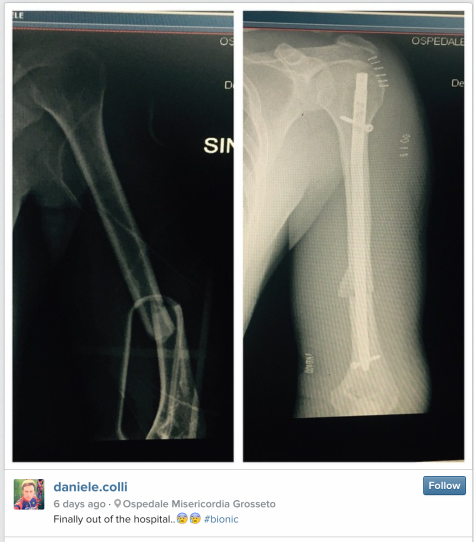 The FlechaWatchers saw perhaps one of the most chilling tweets in their timeline.

We prayed Juan Antonio wouldn’t let Maxime Bouet get near him with the scissors – look what he did to Mick Jagger!

FlechaWatchers were on tenterhooks. Some of us reacted to the news like this little girl in the Oval Office. (This excellent picture is of @BenjaminFMoser’s niece.) 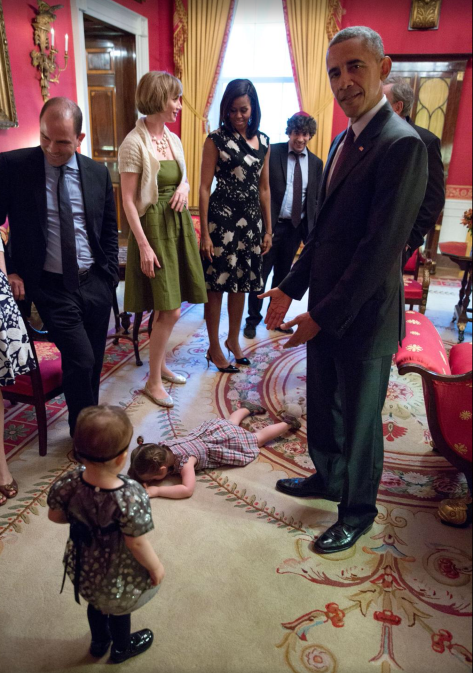 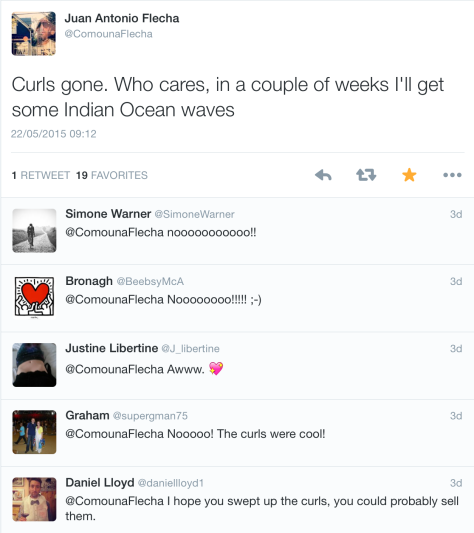 It was with a collective sigh of relief when we saw our hero post-CurlsGate.

There was, however, a question about what the hell was going on with Ashley. 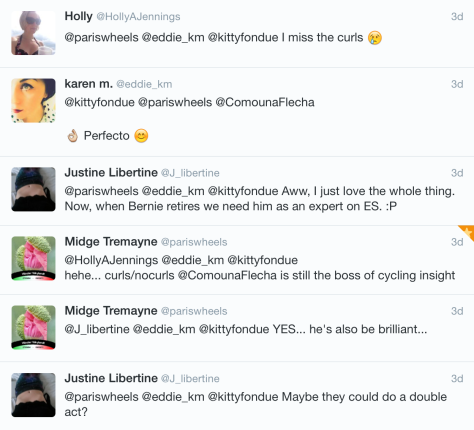 We’re not so sure about the hot pink fedora, however.

Once we bounced back from Curlsgate, we went back to talking about his wardrobe. He never misses. Brazilian colours for the Imola stage in honour of Ayrton Senna. Nice touch. 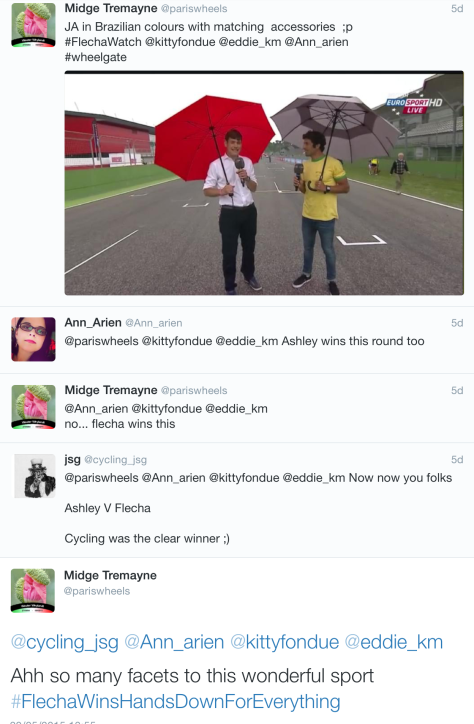 Just a last, longing look at Juan Antonio with curls *and* pink jeans – a devastating combo! Hey baby, how you doin’?

Nice bit of photoshopping from the Jumbo Bees.

If only ice cream cones came in that size. 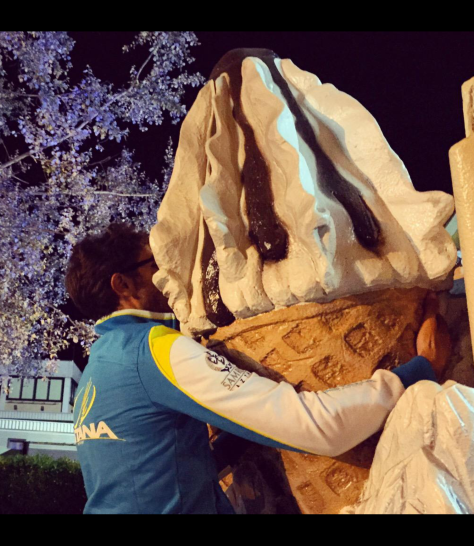 The ArgoSunGod has been spotted back in the peloton. Let’s hope he gets his form back for a storming July. 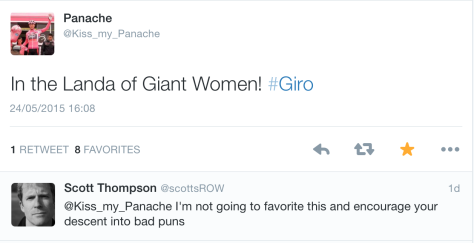 Wei Yuet can even make fantastic photographs with a smartphone. 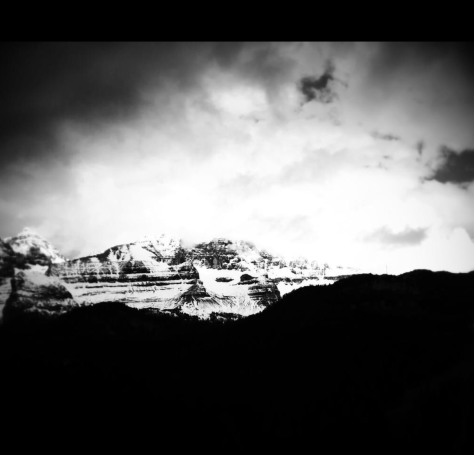 I just loved this picture.

Aru has yet to find his poker face.

It’s been nearly a year since the terrible crash that put That Boy Phinney out of action. But it looks like, hopefully, he’ll be back in the peloton soon. He’s looking good, well, in this picture. The Capn Crunch pic – that facial hair has to go! 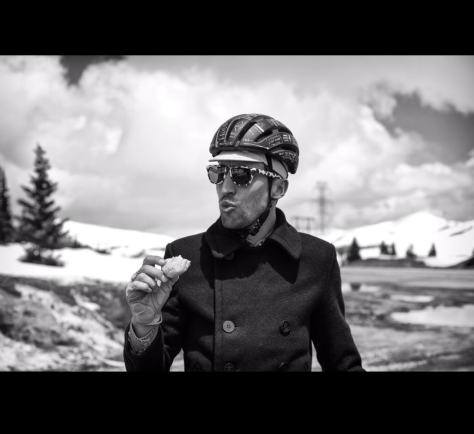 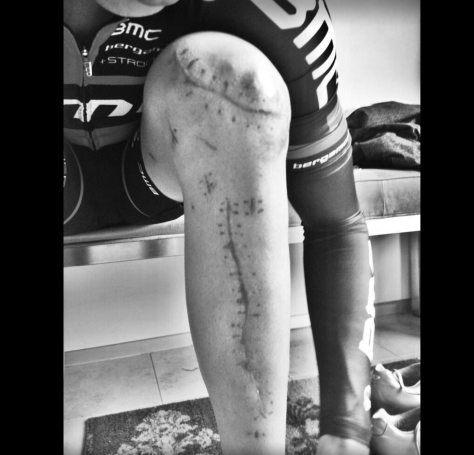 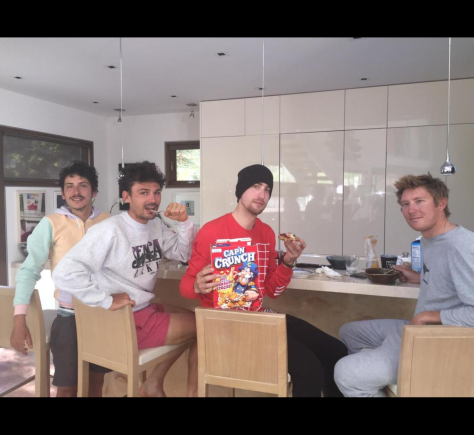 Good to see the King out and about. 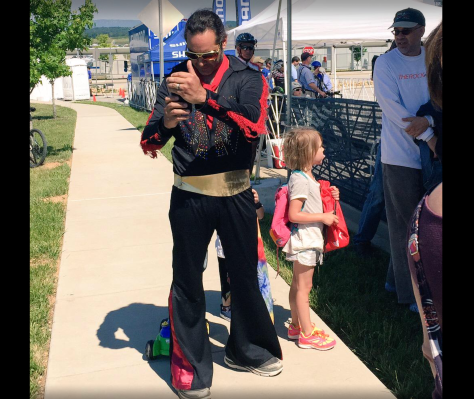 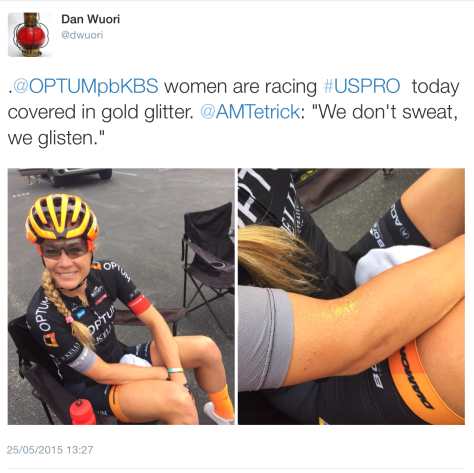