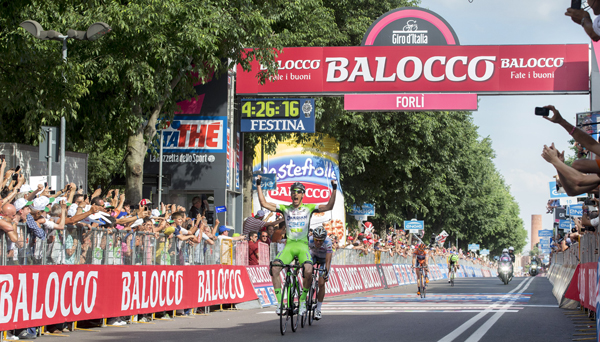 This Giro just keeps on providing the drama, doesn’t it? On a day when everyone and their mother predicted a bunch finish without worrying the GC teams, two unexpected situations unfolded. First an Italian-flavoured breakaway of five held the entire peloton at bay with Bardiani-CSF’s Nicola Boem taking a brilliant win and the lead in the points competition. Secondly, Richie Porte suffered an untimely mechanical in the closing stages losing 47 seconds to Alberto Contador, who stays in pink, and then receiving a two-minute penalty after Simon Clarke stopped to help him out.

Break of the day (possibly the Giro)

I just can’t do it. I am not choosing just one of the fantastic five breakaway guys, it wouldn’t be fair. So they’re just going to have to budge up a little and share the top step of the podium.

When Boem, Matteo Busato (Southeast), Alessandro Malaguti (Nippo-Vini-Fantini), Alan Marangoni (Cannondale-Garmin) and Oscar Gatto (Androni-Sidermec) broke away early this morning, I am certain they were expecting to just show their assortment of splendidly bright jerseys off to the cameras. However, a favourable tailwind and lack of commitment by some of the sprint teams, combined with a superb show of heart by the break meant the unthinkable happened. The break stayed away and, my, how they deserved it. #chapeau

One thing we noticed

We all  know that bike racing requires strength, courage, teamwork and tactical awareness, and to win you also need a sprinkling of luck and sometimes the kindness of others, Richie Porte‘s late mechanical and subsequent time loss exemplified many of these factors.

With 6km to go and the chase to catch the breakaway in full cry, the camera suddenly picked up several Sky riders at the back of the peloton looking anxiously behind them. It quickly became apparent that their team leader had punctured and was in danger of losing significant amounts of time. They team time-trialled their way to the finish giving everything to cut the time loss for their captain. As they bowled over the line we all waited to see what the damage would be: 47 seconds. To lose time on a day such as this is atrocious luck to say the least.

Things could have been so much worse for Sky without help from unexpected quarters. After the race finished Richie posted a picture on social media thanking fellow Aussie Simon Clarke (Orica-GreenEDGE).

If that's not Aussie mate ship them what is? Punctured and clarkey gave me his front wheel… https://t.co/bu9tf3AhX4

With Richie waiting for his team car and the clock ticking Clarke stopped, handed over his own front wheel and pushed the rider back into the fray. He said later to Cycling Weekly.

He’s just another Aussie, mate. He punctured and obviously needed a hand. It was one of those split seconds where it could have cost him the Giro. All of us Aussies get along well, it’s not like I was colluding with a team we are trying to race against. I’m just trying to help out a friend. Right when he stopped, he had no one. I was right there and about to sit up and roll in.

With so many negative stories surrounding cycling at times, it’s lovely to have something to make you smile. Camaraderie in the peloton is one of the many reasons I love this sport. The marks of respect they show each other could be viewed as old school, but to me it’s a special tradition that I would hate to see the sport lose.

It was a touching footnote. Or so we thought.

It’s a crying shame that the Giro organisers do not see this in the same light and instead saw fit to award both Porte and Clarke two-minute time penalties for providing illegal help to a non-teammate. While the punishment is in line with the rules, I wonder if there could have been room for discretion. This story is sure to run on. But as it stands, Porte’s dreams of winning the Giro stand in tatters thanks to a spontaneous act of charity.