In a short, difficult stage, Tinkoff-Saxo drove the peloton all day long, leaving Orica-GreenEDGE’s Michael Matthews fresh to take the sprint win and keep the pink jersey, with Trek’s Fabio Felline and Philippe Gilbert taking second and third. But the result is secondary to what happened on the road today.
END_OF_DOCUMENT_TOKEN_TO_BE_REPLACED

It was a scrappy-doo end of Giro stage 2, with a few nasty crashes and a crazy-quilt of a sprint with Sky’s Elia Viviani getting the better of what was left of the field. Meanwhile, over in California, Mark Cavendish keeps the sprint fires burning with a resounding win. Here are highlights and flamme roug action for you this Monday morning. END_OF_DOCUMENT_TOKEN_TO_BE_REPLACED

The peloton might have had a relatively easy two days on the coast to find their feet, but now they need to find their climbing legs as the route heads inland and decidedly upwards. The next three stages see them tackle seven categorised ascents and the first mountain-top finish.

It’s a hilly, leg-sapping stage that sees the riders take on two categorised climbs with the category two Colle Barbagelata being the stiffest test, coming about 50km from the finish. However, it’s not going to be the gradient that causes problems today. At 136km, this is the joint shortest stage in the Giro and that means it’s going to be ridden at a furious pace. A swooping downhill back to the coast and flat run in will make it faster still, especially since Orica-GreenEdge will be all guns blazing to keep the pink jersey. Oh, and just for some added nerves, they hurtle through a well-lit tunnel with 2km to go. Expect an out-of-breath peloton to be thankful to see the finish line. 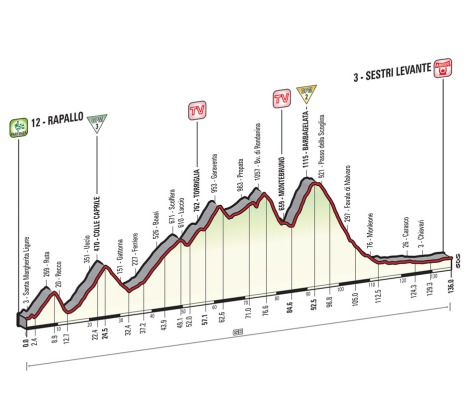 I hope the riders rested well overnight because today is going to be like yesterday, but harder! A saw-toothed profile and three Cat3 climbs makes this an Ardennes-like stage. The Biassa climb comes just 10km from the finish and, with gradients approaching 8%, it will make the pure sprinters work hard to hang on and will keep the general classification guys vigilant. It could well be one for a breakaway of puncheurs attacking on the last climb and staying away to the finish. 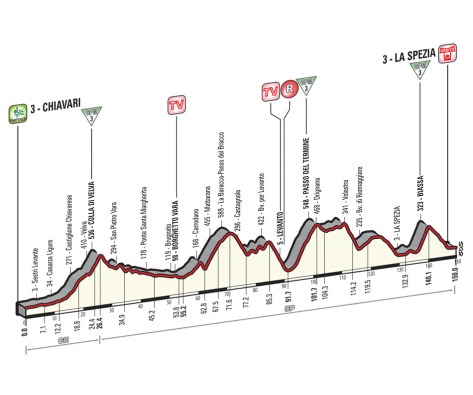 You know the old saying, “the race won’t be won here, but could well be lost”? Well today’s mountain top finish stage is certainly one of those. Note the word mountain. At 17km and staying at 7% for most of those, the Abetone is most definitely not Ardennes territory. Expect to see the title hopefuls come out to play on the ascent, and woe betide any of them who haven’t quite got the power in their legs yet. However, I think the stage win will go to one of the riders seeking the blue rather than the pink jersey.

Header image: Detail of the pulpit at the Duomo, Barga