Hands up who’s ever got themselves lost? It can be frustrating, annoying, and even scary to relinquish control over your short-term destiny and be forced to face the unknown. But what happens when you embrace that unknown and throw yourself into it? I mean, forget the fear, forget where you think you want to be, forget your plans, and look around you and revel in the sights, sounds, and challenges of that new experience.

Today’s quick hit is all about the joys of getting lost. It’s about two guys, Dylan and James Nord (Deux North), who go hunting for the road less travelled. This, however, is not your average biking holiday, it has a twist. Dylan and James gathered together a bunch of like-minded explorers including our good friends Jon Baines, and Jered and Ashley Gruber, and hooked up with the World Rally Championship near Barcelona before spinning off in search of wild roads.

If you like stunning photographs of bikes throwing up trails of dust, glowing with fire in the sunlight, slicing through silent villages and attacking untamed hills, then this is for you. A picture does indeed paint a thousand words, so rather than bang on about how good the resultant gallery is (because, let’s face it, look at who’s involved, you KNOW it’s good!), I will simply point you in their direction.

And it doesn’t stop with the stills! They’ve also produced a film to document the Hunt V experience. It beautifully captures the spirit of adventure, along with plenty of cool shots and a wonderful soundtrack provided by City of the Sun. If it doesn’t make you go out and buy a cross bike, it can only mean you already have one! 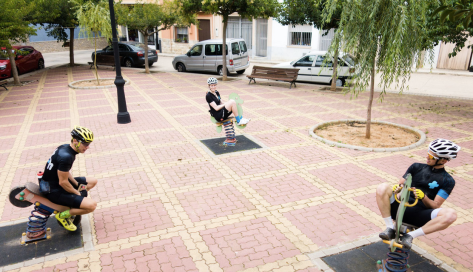 Fancy getting involved? Contact them and maybe we’ll see you in their next instalment!

All photographs from Deux North

One thought on “Deux North – Hunt V: Are we there yet?”