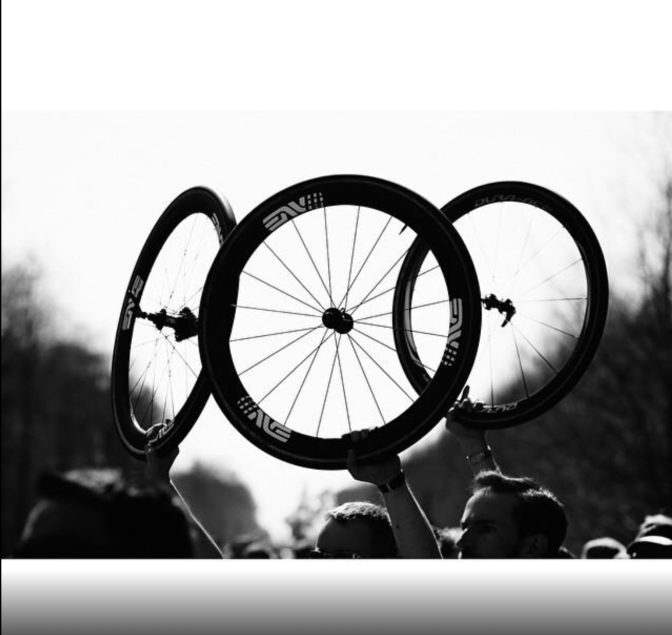 I dreamed a dream of Degenkolb. He was dusty yet dignified – and he won Paris-Roubaix. So this Tweets of the Week is dedicated to that dream come true of victory in the Queen of the Classics. We also have a pantheon of dusty faces as well as one knight calling it a day.

Quiet before the storm

One of our favourite photographers was on hand to document the day and you’ll be seeing a lot of Marshall Kappel‘s work in this column (as well as the coveted header image). I love this picture – so green, so spring, so quiet before the chaos. 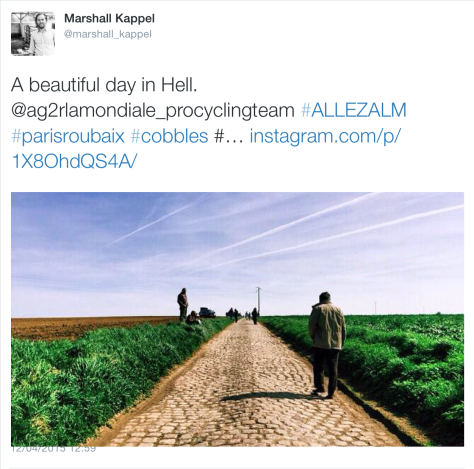 Another fantastic picture, this time by Tim de Waele, on the cobbles with Kristoff during a recon, catching that split second.

What is Paris-Roubaix? What is this madness?

I believe you remember from the Ronde the hoopla around Sky’s ‘new, game-changing’ bike. As it didn’t seem to change the game in Flanders, they were going for something different for Roubaix. 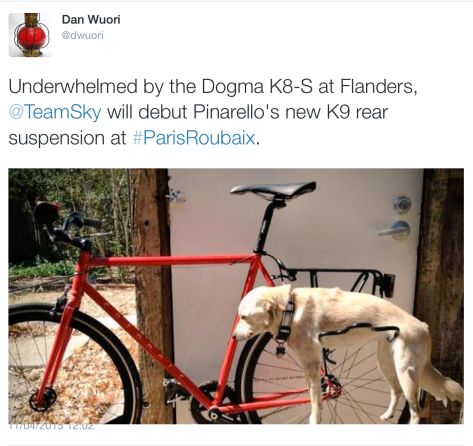 Let’s just get to the pictures, shall we? Poor Quentin Jauregui is giving what is known in official circles as ‘the dead eye’.

Sagan might have an aura around him in this picture (he is looking surprisingly velvety) but we’ll see him later when he’s maybe not so … put together (and the dead eye makes another appearance).

And the lovely Wei Yuet was at Roubaix as well and got this fantastic shot of my alternative Rider of the Race, Luke Rowe.

Are you wondering where that kid’s hand is? 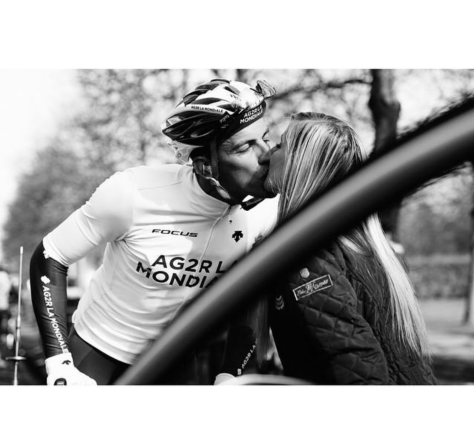 So young, so enthusiastic. Don’t you just love it?

Poor Peter. He had a very, very bad day. First he had a dodgy stomach and had to jump into the bushes with his bibs down (caught on camera by Sporza), then he had bike trouble right at the very worst possible time near the end. Is it any wonder he’s sitting there in his Underoos giving us all the dead eye? A literal reading of Fabs’ phrase: ‘A shit day of #unluck’ 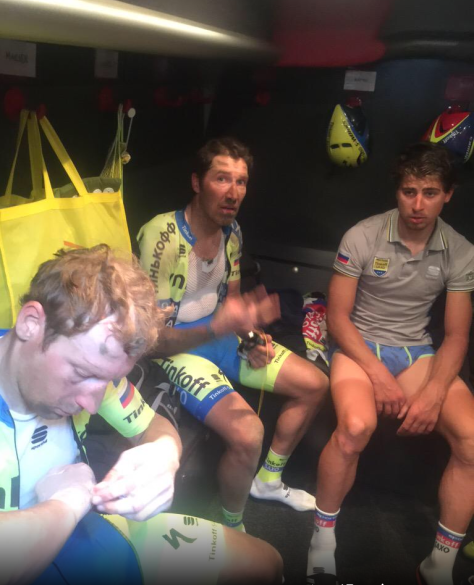 [I had toyed with the thought of not putting this picture in but Panache basically told me that if I didn’t, he would disown me as his sister. Peter, you lost.]

Sep Formica didn’t have to jump into any bushes but he sure did have a bad day – it was just one damn thing after another, much like his entire classics season.

Count your blessings, Sep, at least you don’t have to walk around with this strapped to your head.

Unbelievably, this is the Before picture – Zdenek Stybar left his teeth somewhere in Flanders. (Can you imagine what it must have sounded like when he tried to say his own name?) 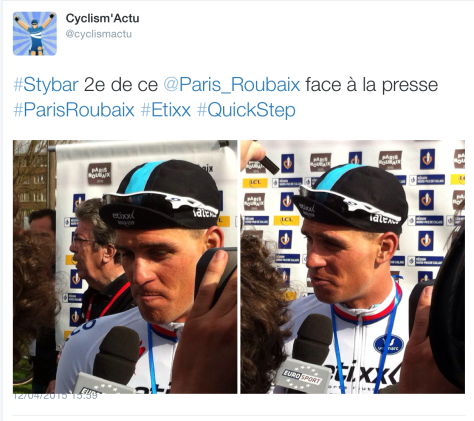 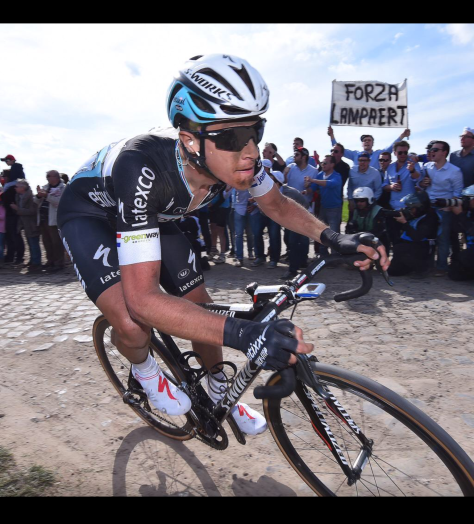 One of the most commented bits of yesterday’s podium presentation was the fact that Degs’ entire team were at the side watching (no doubt with some tears in their eyes). I’ve never seen that before. And the fact that he got them up onto the podium with him – a great team effort. 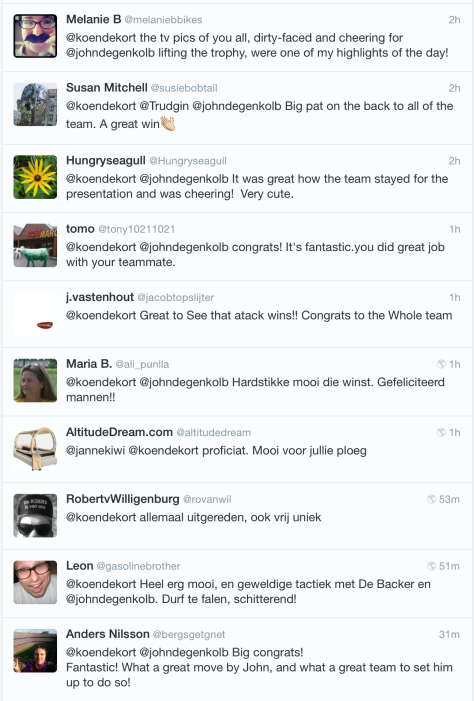 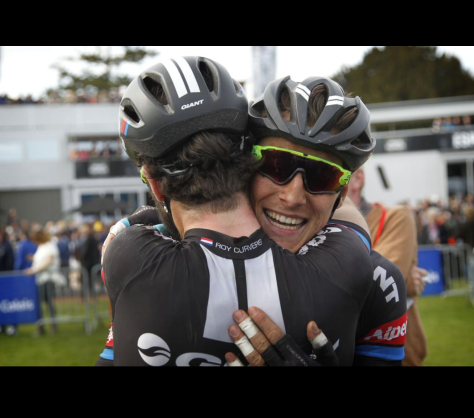 And of course they’re going to shower in the iconic Roubaix showers. “Got any of that Herbal Essences shampoo over there?” 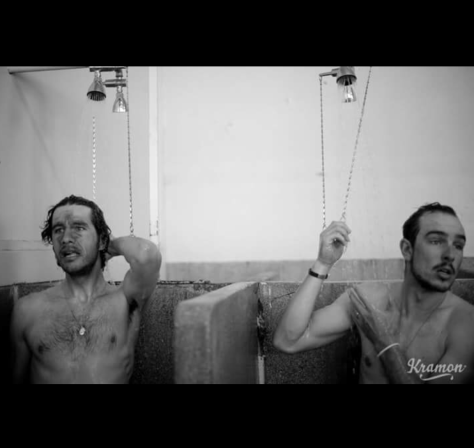 And taking a little bite out of the trophy before Degs takes it home.

“I’m sorry, sir, but you’re not going to be able to put that in the overhead compartment.” 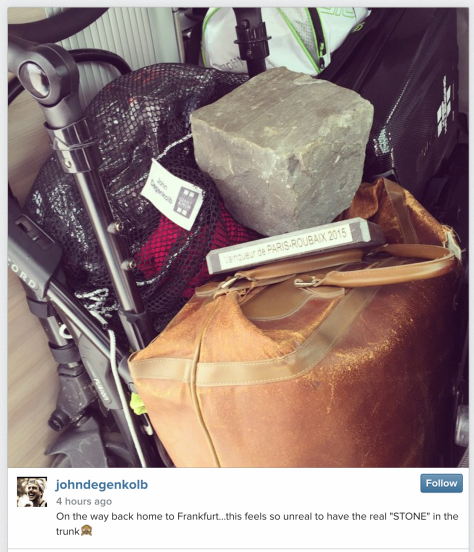 It didn’t turn out quite like Bradley Wiggins hoped but he made it to the Velodrome as promised.

The only thing I can say about this particular picture is: what the hell is happening to Bernie?

In the most hyped race participation in the history of the sport, it seems the British press went just a touch overboard. 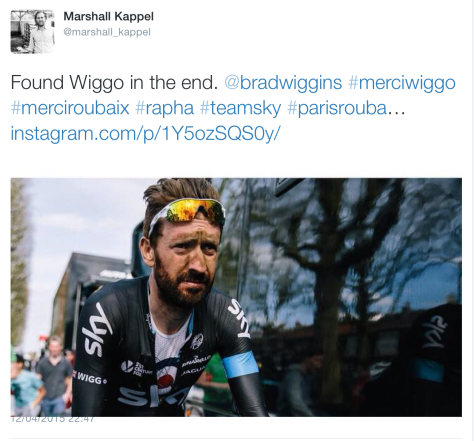 After the race, it was a time of reflection on Wiggins’ Sky career. 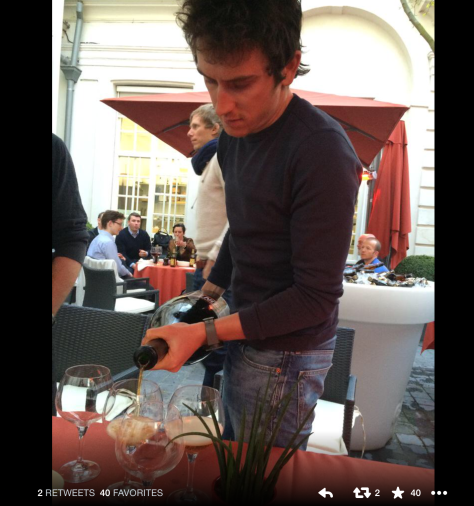 Wiggo has left the building. 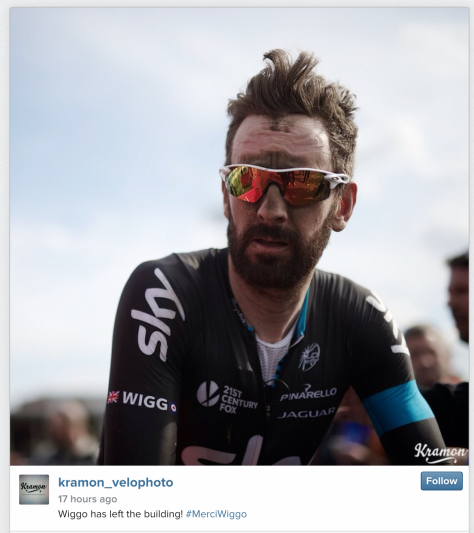