Cunning and guile trumped youth and bad tactics in today’s rain-soaked and wind-battered Gent-Wevelgem – one of the best races we’ve seen since, well, Omloop het Niuewsblad! Luca Paolini (Katusha) won with a 5km solo ride to the finish to become the race’s oldest champion at 38. 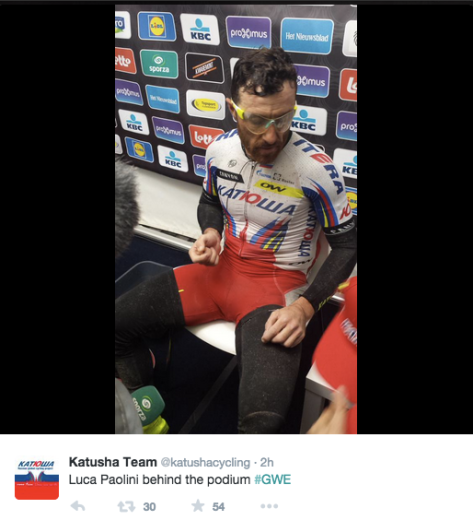 The hard-working, self-sacrificing super-domestique sometimes gets to give a victory salute and that day was today for Luca Paolini. The veteran Italian racer launched himself off a lacklustre and dispassionate peloton to bridge to a small group of riders which would eventually contain title contenders, including E3 winner Geraint Thomas, Sep Vanmarcke, Jens Debusschere and Etixx duo Stijn Vandenbergh and Niki Terpstra. This group, in hot pursuit of Lotto-Soudal’s Jurgen Roelandts, broke whatever will the peloton had and were left to their own devices.

Although a beast of a rider, Paolini was always going to be disadvantaged in this elite group on the climbs – yo-yoing off the back before gritting his teeth to catch back on. Yet, another race, another day of bad tactics from Etixx, who gave Paolini the opportunity to attack with 5km to go. By the time the small group figured out he had a gap and looked around to see who was going to chase, he was away, only to be seen again on the podium. Pointing to his head and his heart as he gave his victory salute over the line, he proved that, in Flanders particularly, an experienced tactical brain can take on younger legs and win.

It was an incredible race, one for the courageous. Halfway through I was asking myself if it was reasonable to continue. But I resisted (the temptation to quit) and I’ve earned the best win of my career.
[Velonews]

Four things that made us go hmmmmm

1. Etixx tactics. Once again, Etixx-Quick Step’s tactics out on the road bewildered, well, just about everyone. Why did Stijn Vandenbergh attack just when team leader Zdenek Stybar punctured, effectively putting the Strade Bianche champion out of contention? Why did Terpstra and Vandenbergh keep dropping each other during attacks in the last 15km or so? Why couldn’t they have pooled their resources and ridden after Paolini, once they realised he had a gap? Why don’t any of them look like they’re riding for anyone but themselves?

2. G on his own. Once again, Geraint Thomas found himself bereft of teammates at the sharp end of the race yet still made the podium. Luca Paolini gave him more support – helping him contain attacks and making the breakaway unreachable to the chasing peloton – than his teammates have done in the past week or so. I’ve always thought the sign of a great classics rider is one who can just hunker down and do it themselves if needs be. If that’s the case, G will be on the podium in spring for years to come. But surely Sky could give him a hand every once in a while? And what of Ronde and Roubaix? Bradley Wiggins has expressed his desire to win Roubaix, but he climbed off his bike barely two hours into the race (granted, 161 abandoned by the end). It’s not going to get any easier, Brad! His response? “It is what it is.” Do Sky still think he’s the best bet for Roubaix? They need to get behind G now and give him the respect and support he has earned through grit and determination in these cobbled classics.

3. Belgian weather. And speaking of G, the Belgian weather gods don’t seem to like him much. We do always mention his propensity for falling off his bike at inappropriate times but today, he was actually blown off his bike, flying head over heels onto the grass before jumping straight back up. The wind was really the biggest challenge for the riders – the rain didn’t help, but the wind was so strong, it was blowing the riders around like they were feathers. It was echelon madness, debris on the road – handy for puncturing at the wrong times! – and guys were using up precious energy to avoid crashing into road furniture! This, boys and girls, is why we love Belgian racing.

4. Jurgen Roelandts. We can’t leave this race without talking about the lone rider who attacked with 75km to go and kept a healthy gap going until he was reeled in at the 17km mark. By the end, he looked to be eking out every last drop of energy in his legs as the elite group closed in on him. With his head hanging down and his riding a bit erratic, one could only guess that if he looked at you, he’d be giving you the dead-eye. Yet when he was scooped up by that elite group, he collected himself, stayed with them, then put in work for teammate Jens Debusschere for as long as possible, to end in seventh. Chapeau!

2 thoughts on “Gent-Wevelgem review: Heart and head wins the day for Paolini”