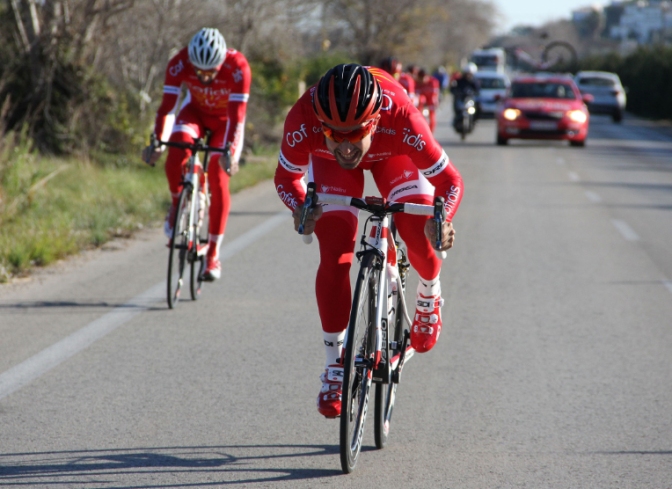 What’s that zipping along the tracks all decked out in red? Why, it’s the Cofidis sprint train all primed and ready to launch new signing Nacer Bouhanni over the line with arms aloft.

Sprinters are not usually short on confidence and Nacer has made no secret of his aims for the 2015 season, as reported by Cycling News.

I want to win and win as much as possible, be it in WorldTour races or other smaller races I ride.

To help those victories roll in, Cofidis introduced their sprint train in a brilliant sequence of tweets which also revealed a whole lot of nicknames.

First up is ‘The Sparrow’ Cyril Lemoine, responsible for imposing a fast pace. Can you spot Nacer?

The Sparrow is followed by Dominique ‘The Horse’ Rollin, who comes out of retirement to support the sprinter. He’s there to keep going for as long as possible before releasing the fast end of the train. Swede Jonas Ahlstrand is next up. A new recruit from Giant-Alpecin, he ought to know a thing or two about the whole sprint train thing. Spotted him yet?

The team bison, Monsieur Adrien Petit takes it through into that all-important final kilometre, until he hands over to last man and poisson pilote extraordinaire Geoffrey Soupe. He moved with Nacer from FDJ and they make a formidable team. Ducking and weaving in those frantic final metres takes a special skill and Nacer holds Soupe’s wheel for as long as possible before leaping away on full power for the last 200 metres or so. There he goes …

It’s not easy to get a sprint train working without a hitch. We’ll get our first chance to see how it’s going at the four-day Challenge Mallorca Series starting today, when Bouhanni and co take on Andre Greipel (Lotto-Soudal), Elia Viviani (Sky) and Theo Bos (MTN-Qhuebeka) amongst others. Should be one to keep an eye on.