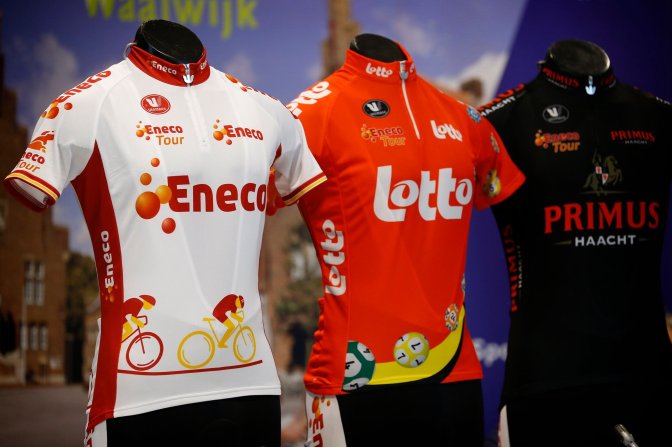 It’s that time of year, isn’t it? Still feeling a little wistful for the Tour de France yet not quite ready to face the Vuelta. But there’s no need to fall into cycling despondency because there are some fantastic week-long stage races at this time of year, and none more so than this week’s tenth edition of the Eneco Tour. 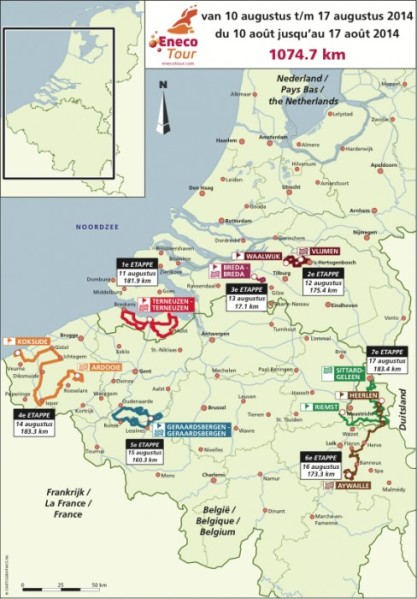 Route for the 2014 edition of the Eneco Tour

This is a stage race tailor-made for both sprinters and hard classics specialists, and that is precisely the make-up of most of the teams. It should not be forgotten that there are precious WorldTour points on offer both for teams and also for those riders who might be looking for a new berth in 2015. Some teams will target stage wins, others the overall.

For pure sprinters we have Andre Greipel (Lotto-Belisol) and Nacer Bouhanni (FDJ). The Gorilla had a quiet Tour by his standards and Bouhanni will be eager to show what he can do now that his departure from FDJ has been announced. Tyler Farrar (Garmin-Sharp) will also be keen to take a stage if he can, as will Sacha Modolo (Lampre-Merdia). Juan Jose Lobato (Movistar) and Matteo Trentin (OPQS) are both fresh from recent wins. And of course we can never discount Giant-Shimano, who bring Luka Mezgec. 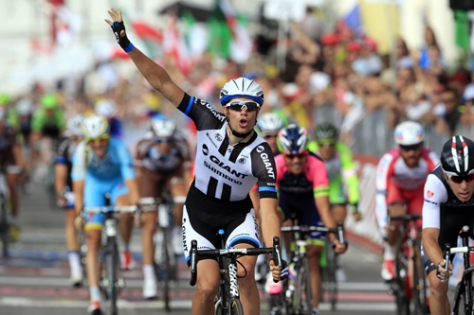 Luka Mezgec will line up in search of sprint wins early in the week (Image: AAP)

The individual time trial is short at 9.6km. Given what is to come over the following stages, I don’t think the pure specialists are going to build enough of a time gap to hold on in the GC. Ones to look for here are Alex Dowsett (Movistar), fresh from his time trial gold medal at the Commonwealth games, and perhaps Niki Terpstra (OPQS). The start list also includes Fabian Cancellara (Trek), although I think he will target a later stage.

There are any number of classics specialists who would fancy a stage win this week. The start list reads like a Who’s Who of cobbled and Ardennes specialists, and includes the winners of the Tour of Flanders, Paris-Roubaix, and Amstel Gold.

Sky have brought a strong team including the in-form Geraint Thomas, Edvald Boasson Hagen (a two-time overall winner) and Ian Stannard. It may be too early for Stannard to win a stage, but it’s great to see him back in peloton after his crash this spring. 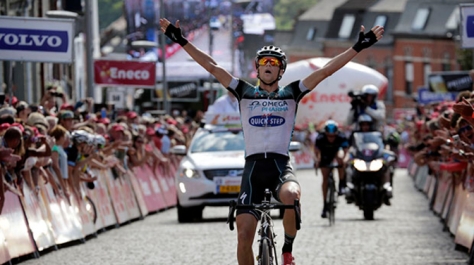 OPQS is packed with riders who love this type of parcours. They will hope to see Zdenek Stybar defend his title with the help of Tom Boonen, Niki Terpstra and Iljo Keisse. Lars Boom (winner of the Tour de France’s cobbled stage) and Bauke Mollema appear for Belkin. BMC bring Amstel Gold winner Philippe Gilbert, and perpetual runner-up Greg van Avermaet. Hopefully he can make it to the top step of the podium this week.

This race is traditionally won by a matter of seconds, and it’s hard to pick an overall winner. However, I’m going to plump for Tom Dumoulin (Giant-Shimano) to go one place higher than he did last year. If he can carry his Tour de France form and put in a good time trial on stage three, he should be there or thereabouts.

It’s going to be a great week of racing and, come on, who doesn’t want to see Tom Boonen and Fabian Cancellara race each other on the Muur de Geraardsbergen?

Daily live coverage and highlights will be shown by Eurosport in the UK. For other coverage check cyclingfans.com.