Everyone predicted that this stage would shake up the GC, but no one figured that defending champion Chris Froome would abandon before he rode over a single cobble. On a rainy, crash-filled day, Vincenzo Nibali put significant time into his rivals and Lars Boom took a muddy solo win.

With nine sections of Roubaix pavé set for today’s stage, it was never going to be easy. Add a few days of rain and it was downright treacherous. So much so that the race organisers took out two sectors even before the race began, due to them being under water so that the riders wouldn’t be able to pick out a decent line. But bizarrely, it wasn’t the cobbles that claimed the most crashes or the biggest scalps. 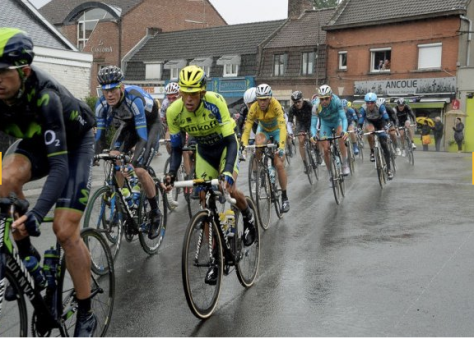 It was the smooth roads in the first part of the race that were, in the words of Panache, “slicker than deer guts on a doorknob”, causing crash after crash, especially once the pace started to rise in anticipation of the first set of cobbles.

Once on the cobbles themselves, the riders rode them with the respect they deserved and there were only minor incidents in the seven remaining sectors. Was the parcours too dangerous to race? Should they have neutralised the stage due to conditions, as some called for? In a word, no. Today was not unlike a one-day classic. It’s racing in the rain, and although there were 193 weary bodies at the end, there was actually only one DNF.

And that one DNF was, of course, Chris Froome. His abandonment came after crashing twice on the slippery roads in the first part of the stage. The final spill brought his title defence to an end as he hobbled to the team car, obviously in both physical and emotional pain.

It was always going to be a big ask for him to perform well today. Cobbles for a rider that thin is tough enough, but add in the wet and the fact that he crashed heavily the day before and went to hospital with a suspected broken wrist (x-rays were inconclusive), and today was realistically only going to be about minimising his losses.

This stage had been planned by the organisers to be a key stage in the shaping of the GC and it certainly did that. However, abandoning after a crash is never the way fans want to see the defending champion (or anyone for that matter) go out of the Tour de France. No matter what you think of Froome himself, his early departure from the race should not be a cause for celebration. Sport can be cruel but sports fans certainly don’t have to be.

So what next for Sky? Richie Porte is now team leader, with Geraint Thomas as his lieutenant. Thomas seems to have the better form at the moment, but Porte has always been the stronger of the two on hard climbing days so the team is obviously hoping the Aussie rides himself into form. Crossing the finish line with a large gash on his thigh won’t help but if he stays out of trouble tomorrow, getting some respite before the weekend in the Vosges, we might see him come good. At the moment, he lies eighth in the GC, 1:54 down from Nibali. With Alberto Contador 19th, 2:37 down, there’s still a lot of racing ahead.

It seems crazy that on this epic stage, the first to cross the finish line is almost overshadowed by the GC drama. But Belkin’s Lars Boom rode a savvy race, most of it with teammate Sep Vanmarcke, and was always near the front on the cobbled sections. He kept his counsel until the pavé sectors were completed and then made his move away from Vincenzo Nibali and Jakob Fuglsang to win the stage solo, muddied and triumphant. He’ll take this into next year’s classics season and be a force to be reckoned with. Chapeau.

Vincenzo Nibali had no problem with the wet and muddy conditions today (Image: Presse Sports)

If you think back to last year’s Giro and even the Vuelta, it’s easy to see why it was Vincenzo Nibali‘s day. The man has no problem riding in the cold, the wet, the slippery. To him, it’s a race day like any other, except for the fact that it’s harder to peel the wet, dirty kit off at the end of the race.

Nibali skipped the chance to defend his Giro title in order to target the Tour and he wasn’t going to let today’s opportunity pass him by. Surrounded by teammates for a good part of the race (and finishing with Jakob Fuglsang), he was always at the front of the bunch, stayed safe on the cobbles and rode them calmly and matter of factly. With every section he put more and more time into his rivals – all the GC riders that can be a threat to him in the mountains are two minutes plus down from him in the standings – making him the rider of the day.