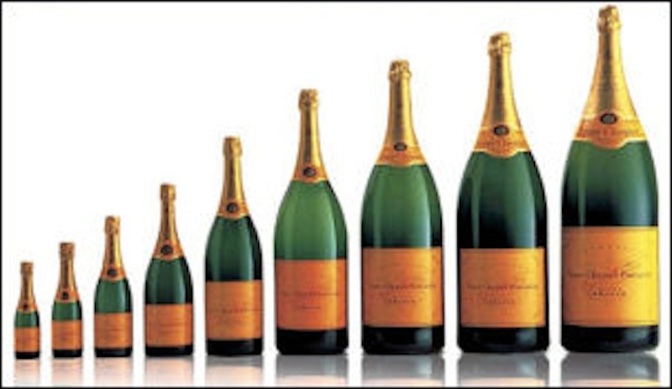 The final week of the Giro certainly made up for the more meh previous weeks. And for every great stage, the Twitterstream delivered as well. Snow on the Stelvio, crazed fans on the Zoncolan (and not just Oleg Tinkov!) and a pink-booted Nairo Quintana. We also have Sky’s TdF reconnaissance, That Boy Phinney back on Twitter and out of the hospital and a whole lotta gruppetto!

‘Do I have to pee on my hands again?’

Hold on a second, didn’t we have these pictures last year for Milan-San Remo? It looks pretty familiar: snow, lone riders and Jered Gruber. Memories light the corners of my mind … 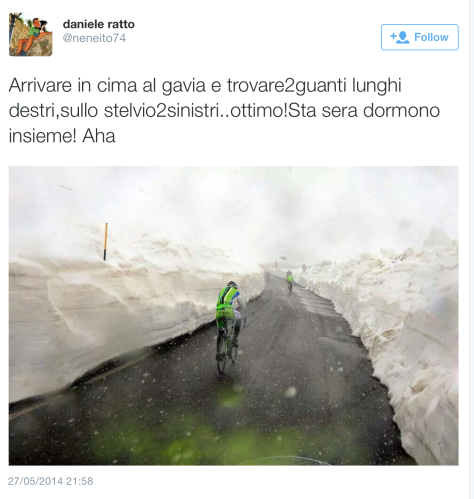 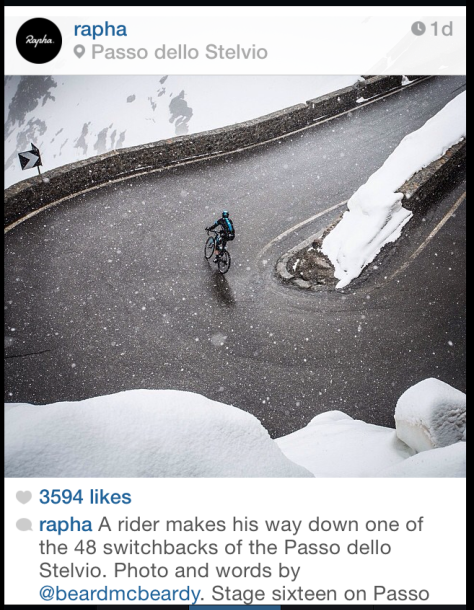 Get on your boots …

One of the big talking points last week was Nairo Quintana in pink. Not because he was leader of the race and was in the maglia rosa, but because he had on the most extraordinary outfit for his time trial. 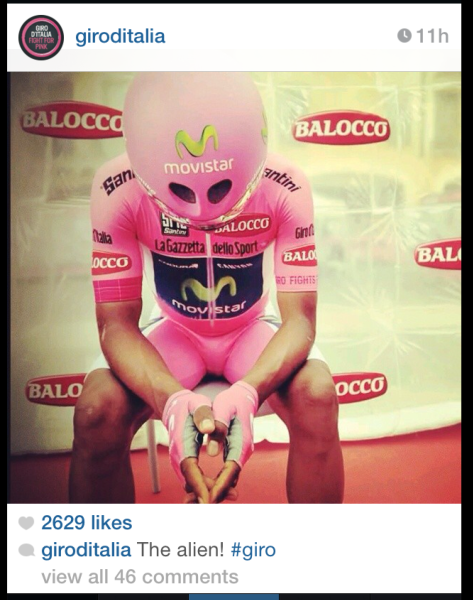 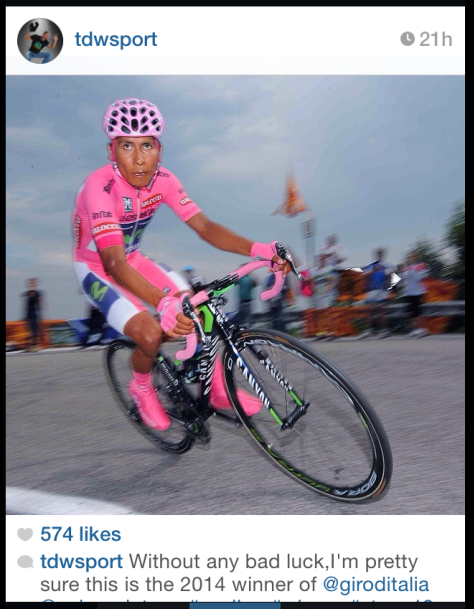 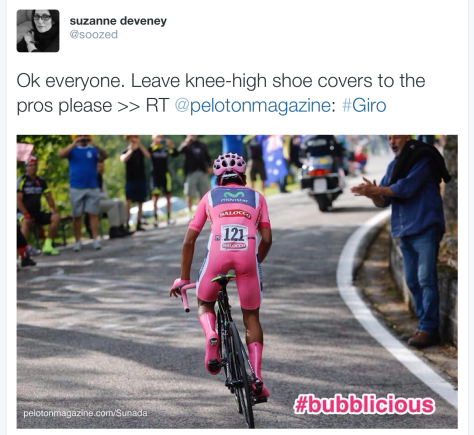 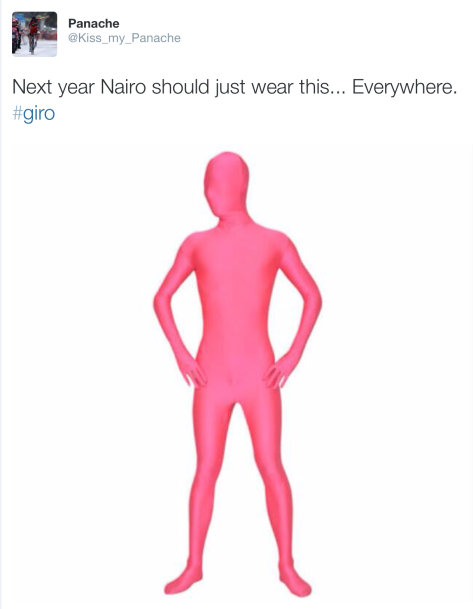 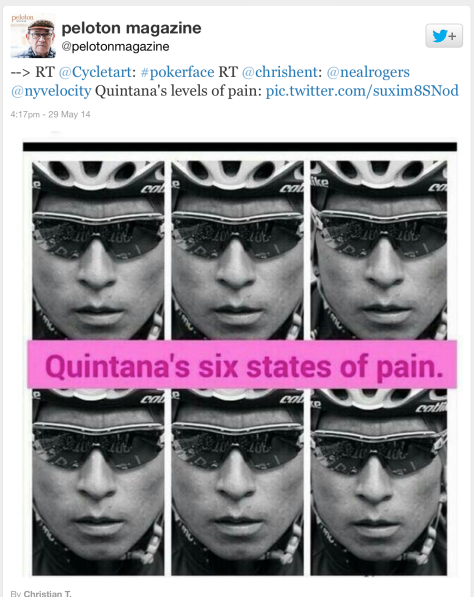 Drunk fans in tutus, wedding dresses, mankinis … and a world champion’s jersey. The Zoncolan was one of those stages where the crazed atmosphere started at the base of the mountain and just got more and more intense. 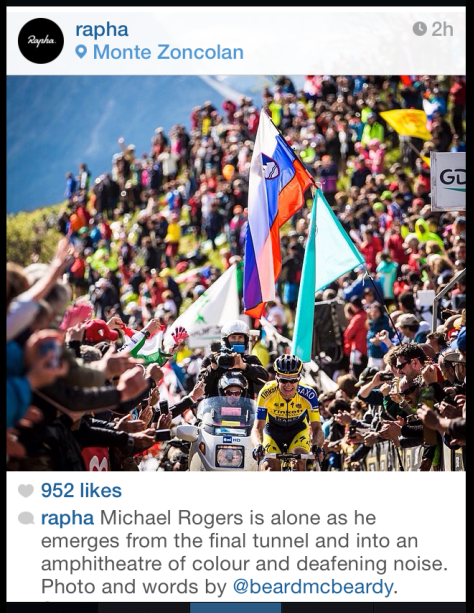 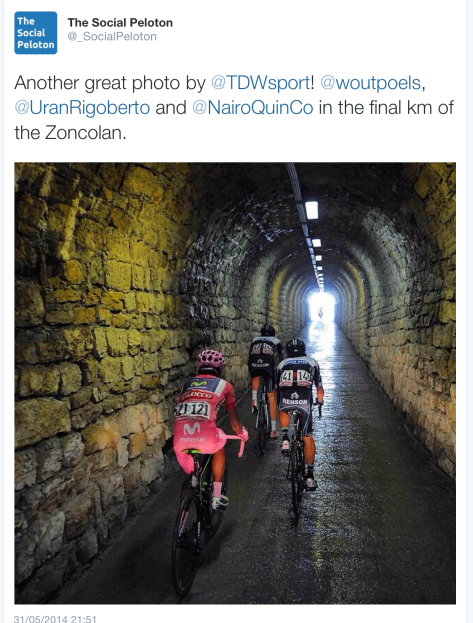 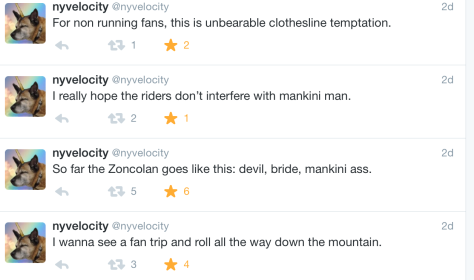 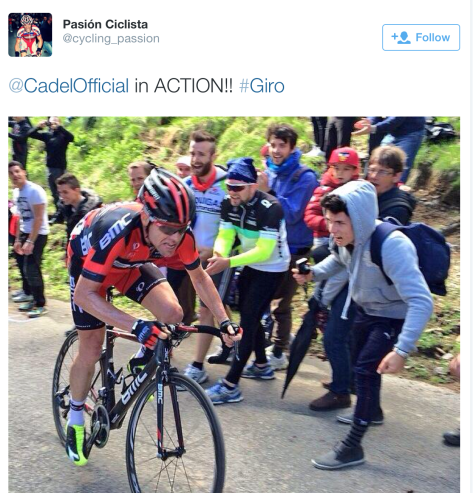 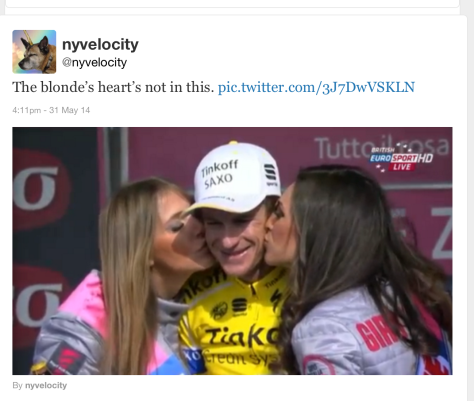 Mick Rogers took his second solo stage win and was crowned King of the Zoncolan. Oleg Tinkov was at the finish to catch him and then basically stuck to him like glue. 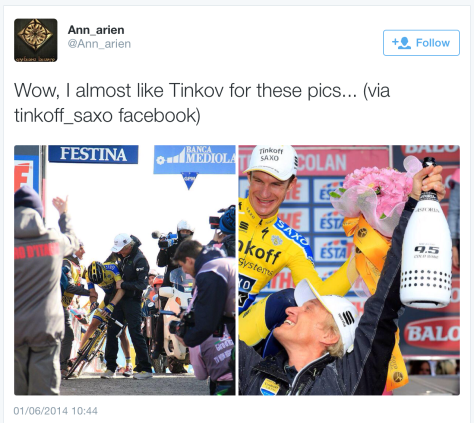 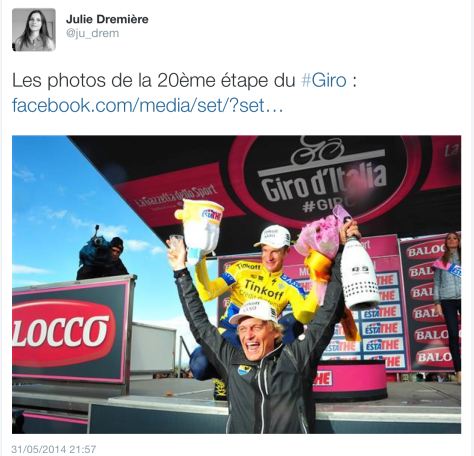 And the party went on and on and on with the Tinkov bubbles.

If this is what the team gets for a stage win, can you imagine what is going to happen when Baby Blackbird Contador wins the Tour de France this year? (Oh, did I say ‘when’? Of course, I meant ‘if’.) There will be enough champagne to fill Niagara Falls. (By the way, three ‘litters’ of Dom Perignon, I believe, is actually called a Jeroboam.)

High fives and smiles all round

Quintana looks so much younger when he smiles, don’t you think? 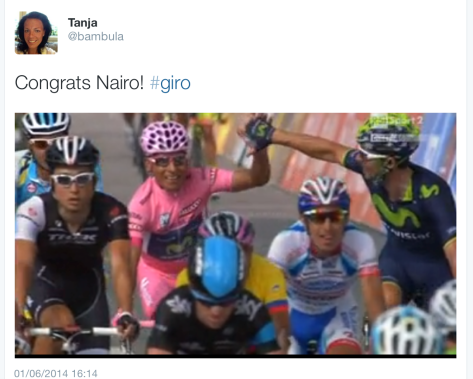 I really love this picture. Mick Jagger is one class act, congratulating his compatriot as he becomes the first Colombian to win the Giro.

This picture is really rather surprising, don’t you think?

And he gets his own personal pyramid when he goes back home. 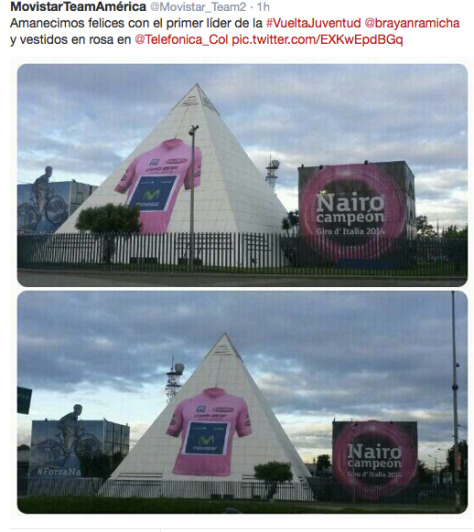 Let’s tie everything else up, shall we? 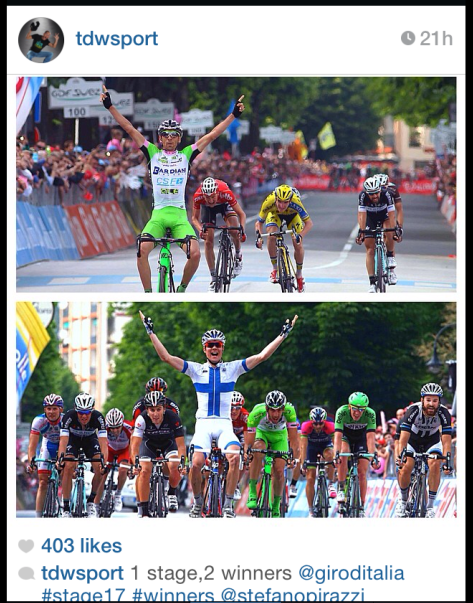 Did I mention how much I love it when riders cry when they win?

It’s also great to see how much this victory means to Colombian fans.

Of course, a grand tour Tweets column can’t be without a few pictures from the wonderfully talented Emily Maye. I love these pictures. 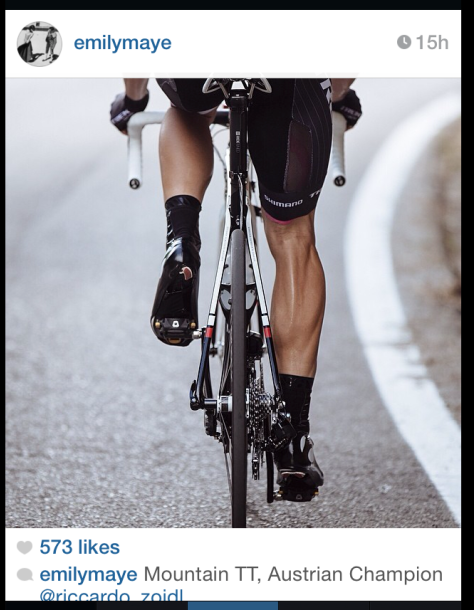 This might not be what you think a rock star would be eating in the limo (or Skoda) on the way to the line, but it is. Rice. Tuna. Corn.

See how happy he is after he had his carbs and protein? Just laughing and singing a song … “She comes in colours everywhere, she combs her hair – she’s like a raaaaaainboooooow” 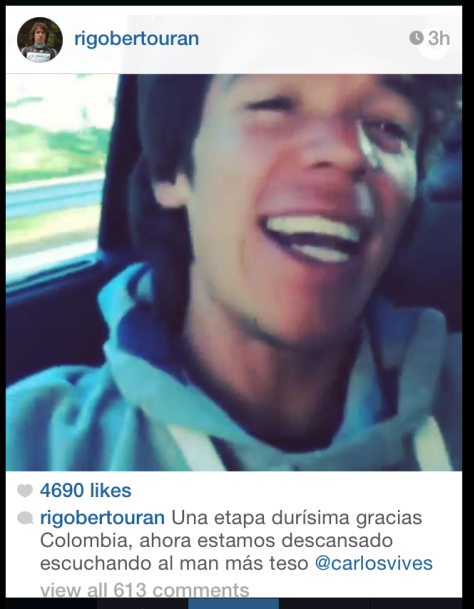 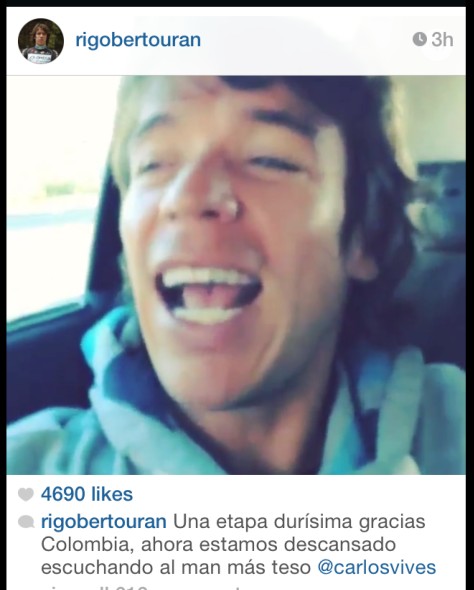 Ulrika GreenEggs were left with just two riders by the end of the Giro – so Dan Jones, the man who makes all the Backstage Pass vids for the team, paid tribute to them on the last sign-in of the GT.

Ah, King Kelly – there’s no one quite like him in the commentary box.

I think that this year’s Giro sorely missed the magic of Michele Acquarone. Here’s how he felt about it all. 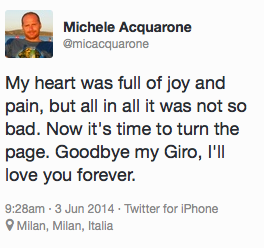 Sweaty or not, this is really rather wonderful. And he still made the time cut! 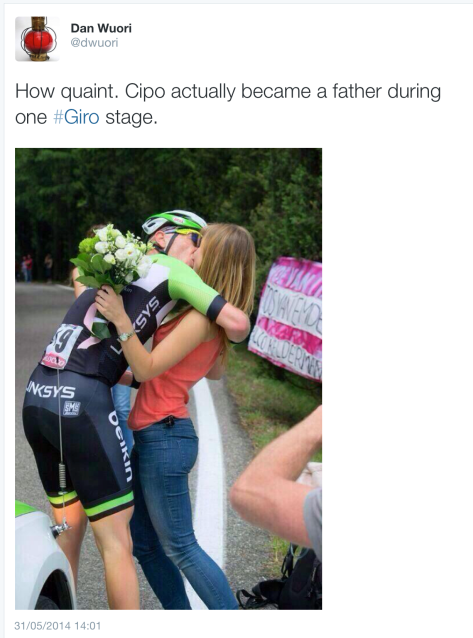 I think we’re going to see young Julian Arredondo for quite some time to come.

While everyone else was celebrating in Italy, Sky were riding some of the roads that are going to be so crucial in July. To the delight of many, including one of my favourite Twitter pals, Alex Jones. 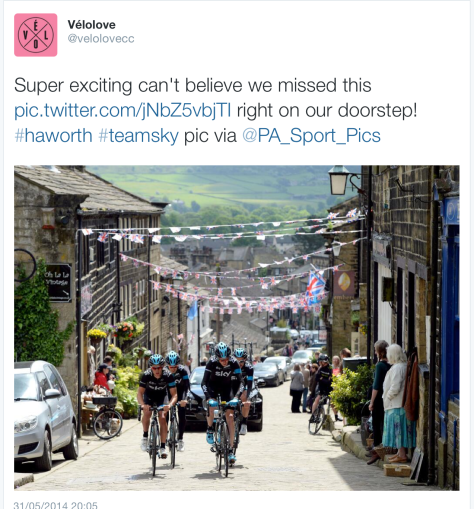 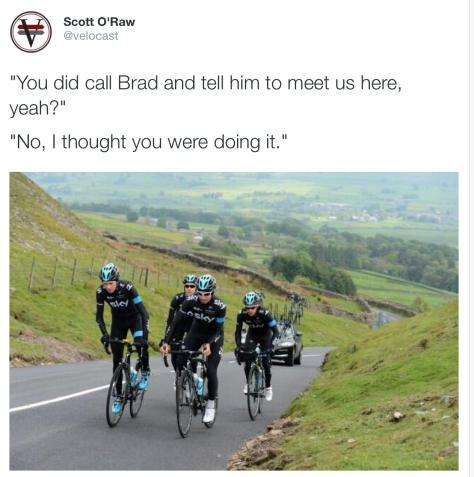 He doesn’t look happy on those cobbles. 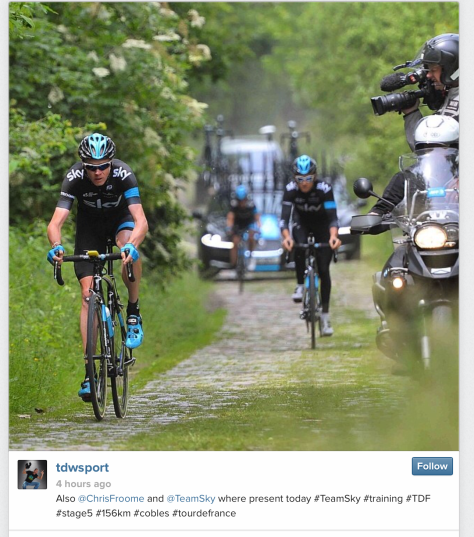 That Boy Phinney has started tweeting again, after two surgeries on his leg, and is concentrating on recovery. As long as he tweets, he’s in this column.

Remember this guy? Robbie McEwen? Don’t you think Arredondo looks a bit like him (only way smaller)? Not sure about the Oakleys though. 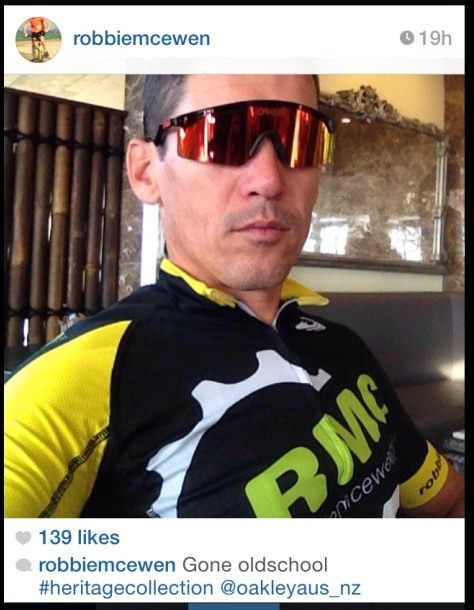 Artcrank has been teasing us with some of the most beautiful and intriguing cycling prints. 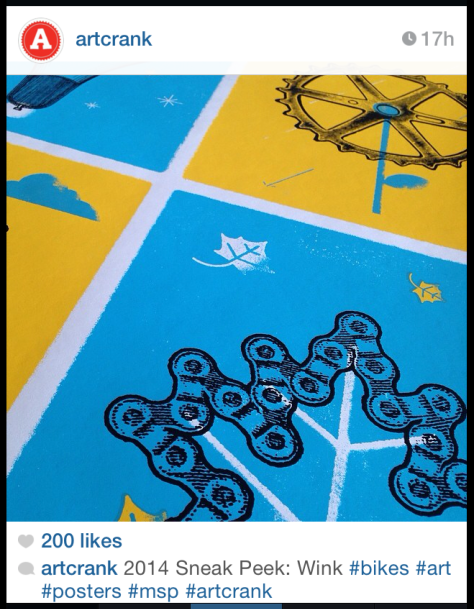 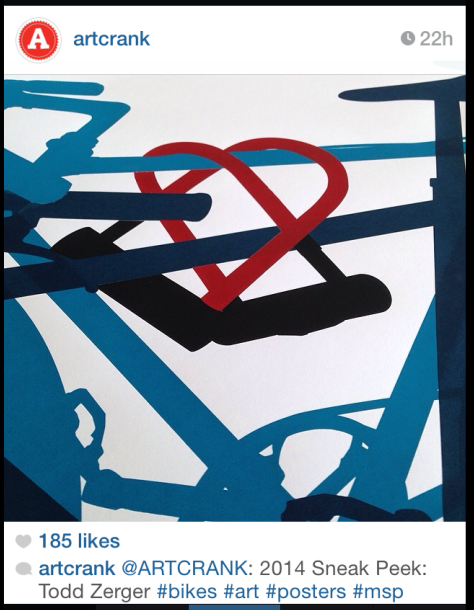 Marcel is ready for his close-up.

What is it with the Lotto boys and motorbikes?

This is actually from last year but Geraint Thomas won Bayern Rundfahrt this year and got another flagon of ale. Except those aren’t flagons. And they probably didn’t open the beer bottles with a deft smack on a table edge like Fabs did after Flanders.

Meanwhile, Tom Boonen was collecting jerseys in the Belgium Tour. And a keg of beer. (I do know that that’s a keg – hey, I went to an American university, I know all about keg parties…)

The Velvet Samurai seems to have found a friend. 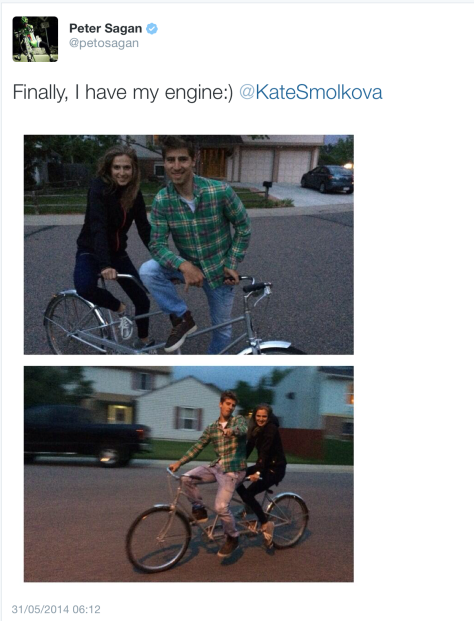 Even Freud couldn’t unravel this dream.

Speaking of sex, here’s Cipo! In camouflage! I can’t ever imagine this man blending in to his surroundings.

I just thought this was a cool poster.

I love this caption: ‘All Team around the Ham’. Sounds like a touching tradition. Lovely to see my #CostaCrush – I hope the summer racing is good to the World Champ.

And who knew Brian Cookson had a sense of humour? (For those of you who don’t know, Mark Cavendish was a teen champion ballroom dancer.)

And what is Michele Acquarone going to? We have to wait and see. Whatever he does, we wish him the very best of everything. We really missed him this Giro.