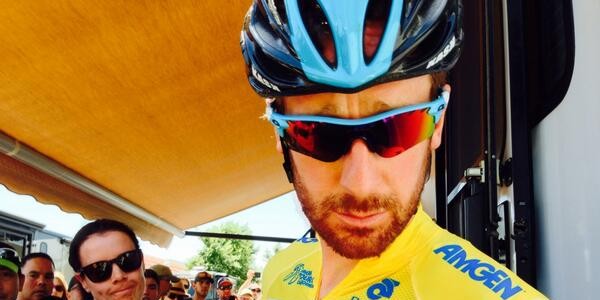 Bradley Wiggins staked his claim for a place in Sky’s team for July’s Tour de France with a strong all-round performance to take overall victory in the Tour of California.

The case for and against Wiggins

Wiggins’ victory and the tactics he employed showcased both why he could be a huge asset in July but also why he should not be considered as a serious option for the general classification.

The foundation of his 2012 Tour win was dominance in the individual time trials coupled with tempo riding on the race’s handful of big mountain stages. However, this year’s race has less time-trialling kilometres and more summit finishes.

Here it was the time trial which set up Wiggins’s win. He was 44 seconds faster than Garmin-Sharp’s Rohan Dennis in second or, put another way. he was more than two seconds per kilometre faster than anyone else in the field. Incredible.

The two summit finishes (stages three and six) showcased both his strengths and weaknesses. On Mount Diablo he went to the front with around 7km left and rode a punishing tempo all the way, thinning out the lead group dramatically, right up to the final half-kilometre at which point his earlier efforts told as he struggled with the steeper gradient, quickly losing 20 seconds.

This is hardly news: Wiggins’ background makes him super-efficient when he can ride in time trial mode. But when it comes to dealing with the kind of attacks on steep ramps that Alberto Contador or Vincenzo Nibali can throw at him, he’s vulnerable.

More typical was Wiggins’ defensive ride on the aptly named Mountain High, allowing a handful of riders to slip away to contest the stage win while holding enough back to react to the attacks of his direct rivals, which he coped with admirably.

Wiggins’ performances this week illustrate his considerable ability to grind rivals into submission and draw the sting out of attacks working for Chris Froome. But can he be the man who takes the fight to the big contenders? I don’t see it.

“Have you heard the one about the …?” Former teammates Bradley Wiggins and Mark Cavendish relaxing at the start of stage 1 (Image: Tour of California)

Where next for Sagan?

We’ve become accustomed to seeing the lime green-clad Peter Sagan (Cannondale) dominate the sprints in California in recent years, recording ten victories in the previous four editions, including five in 2012. Admittedly, the quality of the sprint field hasn’t always been particularly high but the Slovakian has won all types of sprints here, from pan-flat criterium-style finishes to rolling hilly stages.

This year he had to wait until the race’s penultimate day to claim his sole victory – a typically hilly affair which saw him dispense with Thor Hushovd with casual disdain and ensure a fifth consecutive points jersey win.

Sagan’s reduced haul was partly due to the presence of Mark Cavendish (Omega Pharma-Quick Step), who won the first and last stages, and John Degenkolb (Giant-Shimano), runner-up in both cases by a tyre’s width. But stage four, which on paper ought to have ended in a bunch sprint, fell to Will Routley (Optum p/b Kelly Benefit Strategies) from the day’s breakaway, while the following day he had to settle for second thanks to Taylor Phinney‘s successful solo attack.

It’s little wonder that the rumour mill is focussing on where Sagan will end up next season. It almost certainly won’t be Cannondale, who lack the resources to support either the financial or competitive needs of one of the peloton’s biggest stars. But where will he end up? How about BMC as a replacement for Hushovd and to complement the strengths of Philippe Gilbert?

Should Sagan join BMC, one of his teammates next year will be Taylor Phinney. When the American rider got down into his aero tuck position and eased away from the peloton on the descent from stage five’s big climb with around 25km remaining, it looked like a long shot. But Phinney is made of stern stuff, having won a stage at last year’s Tour of Poland with a similar (if shorter) solo attack. A combination of his prodigious engine, a selective climb which stripped down the peloton and removed virtually every sprinter from play, plus a helpful tailwind helped him to an ultimately easy win.

There was perhaps another factor too. Phinney rode the stage in dedication to his late grandfather, who died of cancer. His name was written on his dossards, and no doubt the inspiration helped him stay strong over those closing kilometres. Chapeau. 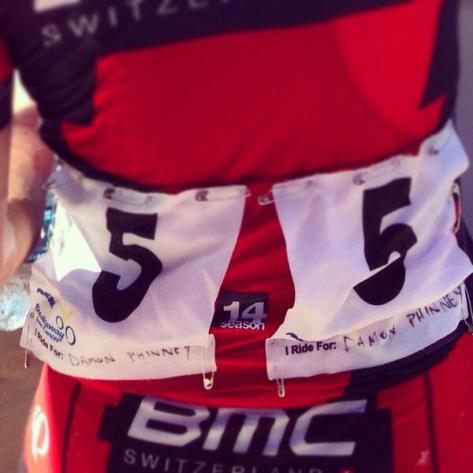 In dedication to Damon Phinney, Taylor’s grandfather, as Phinney soared to victory on stage five (Image: Tour of California)

This kind of late solo attack is fast becoming Phinney’s signature move in stage races. He has yet to make a big impact on the spring classics, but he is one of the best in the world in the time trial discipline and has won the junior Paris-Roubaix twice. His time will come.

7 – The number of different winners of the eight stages in this year’s race. Mark Cavendish won the first and last stages.

9 – Finishing position of 42-year-old Jens Voigt in the stage two individual time trial. The legs aren’t shutting up just yet.

11 – Peter Sagan‘s win on stage seven was his 11th in the Tour of California, in his fifth participation.

5 – Sagan has won the points competition in each of the five years he has entered this race.