Michael Matthews won the stage to earn a sixth consecutive day in the pink jersey but the big winner was Cadel Evans, who put significant time into all his general classification rivals after a major crash with 11km remaining tore the peloton asunder. 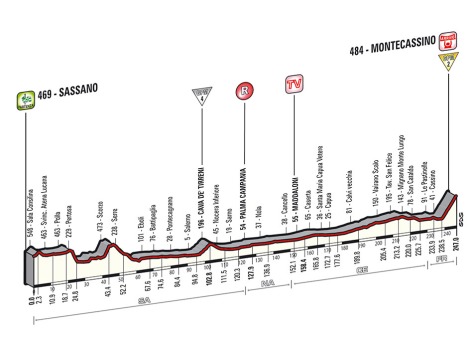 Stage 6 profile: Note that this is the original profile – the stage was extended to 257km

Is that enough excitement for you?

The opening week of this year’s Giro has been – whisper it quietly – a bit dull. Sure, we opened up with a three-day party which turned the Emerald Isle pink. Then there was Dan Martin‘s dramatic crash in the team time trial. Marcel Kittel tore up Belfast and Dublin. And yesterday’s up-and-down finish had its share of thrills. Nonetheless, it has been a slow-burner of a Giro so far, particularly compared to last year’s action-packed opening week.

Until today, that is.

Cycling has a habit of turning around and biting you when you least expect it. On the longest stage of this year’s race – one with a concluding 9.2km, 5.1% climb but ranked only as two-star by the race organisers – 60 seconds was all it took to turn the race on its head.

In that time, the day’s breakaway was swallowed up, a handful of riders came down as one of Kitty’s favourites, Andrey Amador (Movistar), slid off, while 100 metres up the road others were turning themselves into human luges as the combination of wet roads, a roundabout and braking set up a domino effect which will leave dozens of riders nursing a nasty case of road rash for the next few days. Katusha’s Giampaolo Caruso was less fortunate, hitting the tarmac hard and lying motionless in the road for several minutes – a worrying and disgraceful state of affairs – before a doctor and an ambulance finally negotiated the carnage and took him off to hospital. Early reports suggest he has a broken collarbone and wrist – thankfully not as bad as it first appeared.

It made for exciting and dramatic viewing as riders picked themselves off the floor and we all tried to work out who was in which of the splintered groups which consequently formed. I’d rather have another couple of days of safe tedium, to be honest.

To ride or not to ride?

BMC drew some criticism for immediately piling on the pressure, which shattered the disorganised remains of the peloton for good. They forced a selection which left a front group of around a dozen riders, of which their leader Cadel Evans was the only serious GC contender.

Based on my Twitter timeline, most fans seemed to shrug their shoulders and says “that’s racing”. I’m inclined to agree. There is no hard and fast rule that says the leaders must slow down in the event of a crash – it’s a matter of discretion. In this instance the riders were going full-chat into the closing kilometres and the decisive climb, and they had the pink jersey in their number. Had Michael Matthews (Orica-GreenEDGE) been caught in the crash or had it occurred with 111 rather than 11km to go, the case against BMC attacking would have been stronger.

As it was, all’s fair in love and cycling. Even though no rider wants to win through the misfortune of others, I don’t see that either BMC or Evans should carry any blame.

Also, consider this. The Evans group only really had four men – Evans’ and Matthews’ teammates – working at the front of it. The chasing peloton, though reduced in numbers, still comprised close to 40 riders. And yet the gap between the two groups remained consistent at 40-50 seconds. Yes, BMC took advantage. But it was the lack of organisation and full commitment among the chasers that enabled them to stay away. Who’s really to blame here?

The day the Giro was lost?

By the time race leader Matthews won the sprint for the line, Evans had taken a significant – and in some cases insurmountable – chunk of time out of all his most serious rivals, assuming they will all be fit to start tomorrow. At the time of writing, it has just been reported that Katusha leader Joaquim Rodriguez has abandoned after breaking a finger and bruising ribs.

Regardless, Evans’ advantage is already impressive, and by the time the stage 12 time trial has been completed the number of riders retaining any realistic hopes of taking the pink jersey could be down to low single-digits.

Here’s how Evans currently stands versus his direct rivals, all of whom he will expect to put further time into in the ITT. All conceded at least 53 seconds today and, in the case of Tinkoff-Saxo’s Nicolas Roche, as much as 15 minutes:

No matter what happens, the shape of the race has been changed irrevocably, with the side-effect that it will almost certainly make the mountain stages more exciting. Evans can ride defensively, while it is incumbent on those who still believe they can win – realistically, Rigoberto Uran (Omega Pharma-Quick Step) and Nairo Quintana (Movistar) and that’s about it – to attack at every possible opportunity when the road turns skywards.

For others, focus may switch from a high GC finish to the pursuit of stage wins. Note, for instance, that 2012 third-place finisher and Stelvio winner Thomas de Gendt (OPQS) already trails by over 17 minutes. Look out for him and perhaps Roche to animate the race in the high mountains.

INJURY UPDATE: Katusha have reported three of their riders are out of the race. Rodriguez has two broken ribs and a broken thumb. Caruso has no additional fracture beyond his Belfast scaphoid injury but has major contusions to his left leg. And Angel Vicioso has a three-fold fracture of the femur. Ouch.

Today we have not one but two riders of the day. Daniel Oss and Steve Morabito are career domestiques – Oss has not won an individual race since 2010, Morabito 2007 – but both are invaluable members of Evans’ BMC team.

It was their sterling work at the front of the lead group that held the peloton at arm’s length as they charged to the foot of the final climb, before piloting Evans beyond the flamme rouge. Without them, their attack would probably have been swallowed up. As it was, they put their leader into a position from which the Giro is now his to lose.

3 thoughts on “Giro stage 6: Evans in the box seat on the day the Giro turned upside-down”