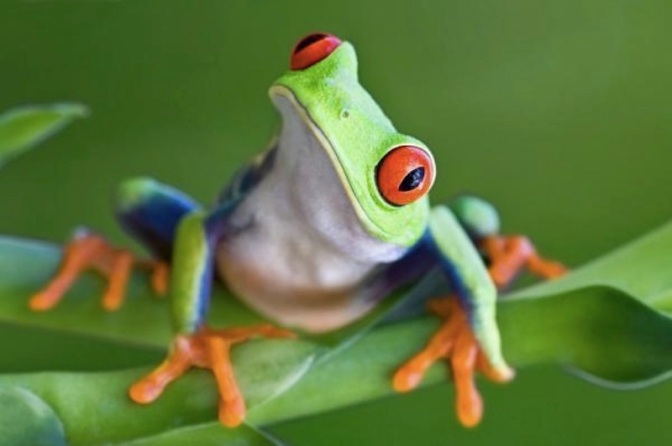 The spring classics are over. But the tweets go on. This week, we swim the Ardennes Twitterstream, visit a Berlin rabbit hutch, await an amphibious transformation and proceed with all other manner of nonsense.

So Tinkoff-Saxo weren’t having much luck in the classics this year. We all knew the honeymoon between Oleg Tinkov and Bjarne Riis was going to end so when Oleg posted the following tweets, it can only send chills down the spine. My question, however, is how was he going to make sure they won when he had them cycling across the Atlantic and back? All his money surely can’t make them amphibious … can it?

Look at the guys on the left. They look terrified, don’t they? They’re wondering about the amphibian rumours. 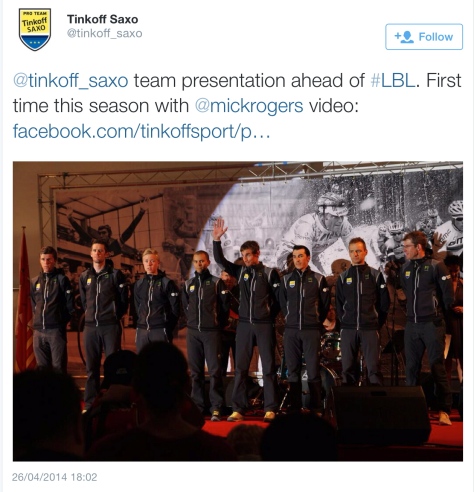 Here the King of Belgium poses with some old guy in a suit and pink tie and the lovely Rui Costa before the race.

While the panda sits and waits for his chance. 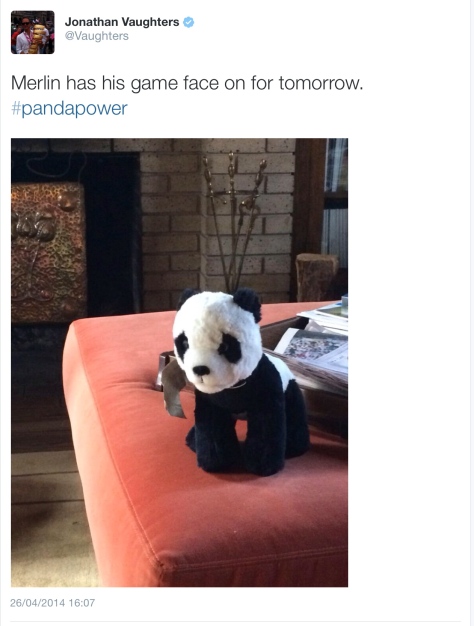 There were a lot of fans hoping that Dan Martin could make it back-to-back LBL victories, including this very patient young man. 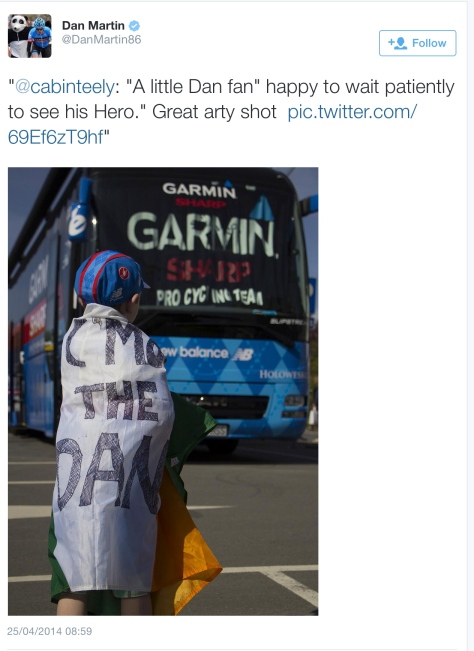 The race is on

Let me help you with that, Michal.

Our friend Rui crashed about halfway through the race, but he tweeted as soon as he got checked over. HIs tweets are so endearing, don’t you think? Only Fabs makes me happier.

Matteo Bono was in the break for much of the race. So everyone – and I do mean EVERYONE – tweeted about him still not finding what he was looking for. Seriously, is that the best you guys could do? You need to try just a bit harder to get in here, kids. But Randy, now this took some effort. Well played, my friend. 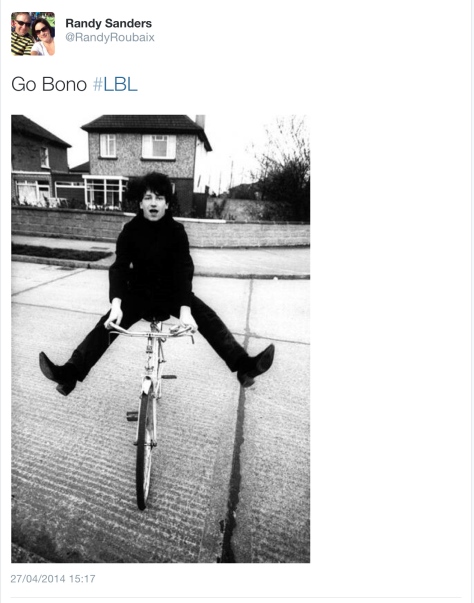 Samu’s still not got to grips with the BMC budget, it seems. He still has those gold shoes, though.

Simon Gerrans timed his attack perfectly. As did Tim De Waele to get this great picture. 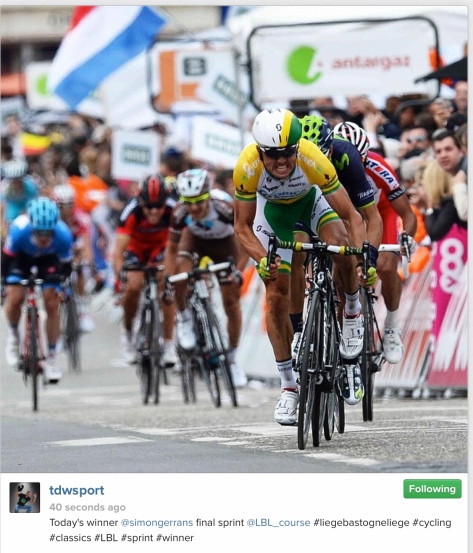 Jered Gruber captures the disappointment of a champion. 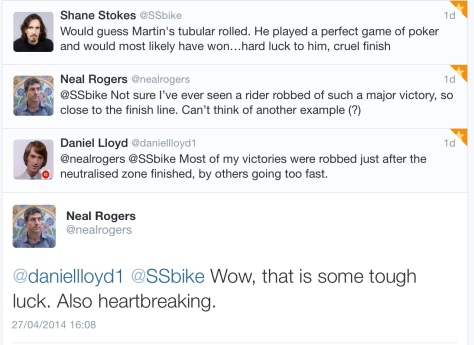 “I am not a crook!” Don’t you think that Simon Gerrans looks a bit like Richard Nixon in this pose?

Jeremy Roy clearly shocked at the rumour about Oleg turning his team into amphibians. 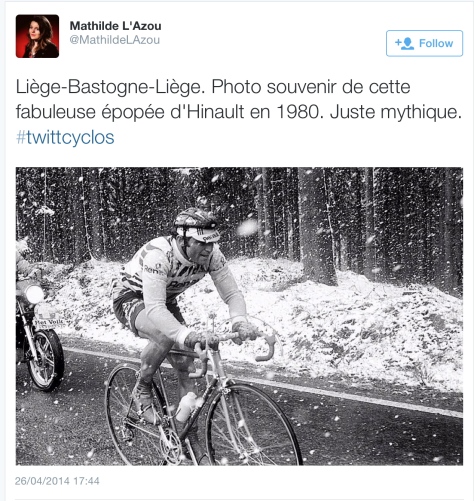 Funny how Sky dominated everything a couple of years ago. Looks like they’re having a bit of a bad time of late.

The whole thing about ripped is due to the photograph of Chris Froome‘s legs … which is coming up. Beware. It ain’t pretty. 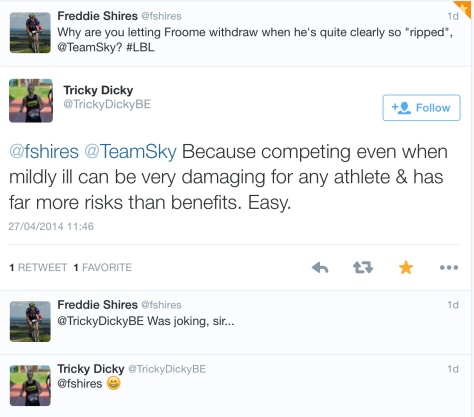 The culprit has been uncovered. 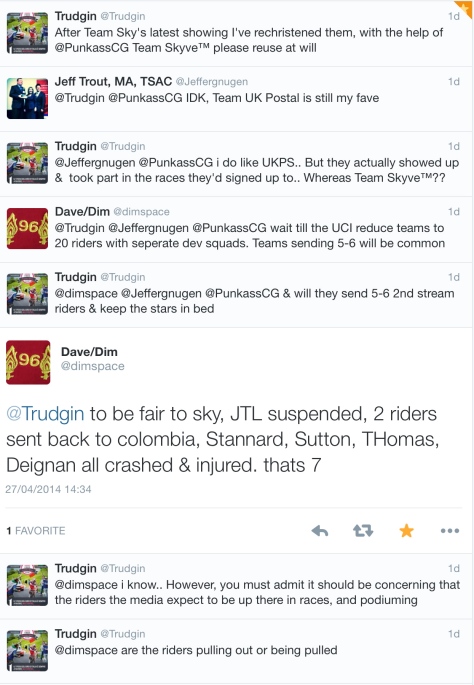 Chris, I’ve never seen you looking so vascular! (Lord Almighty, those are scary legs. And not in a good way.) 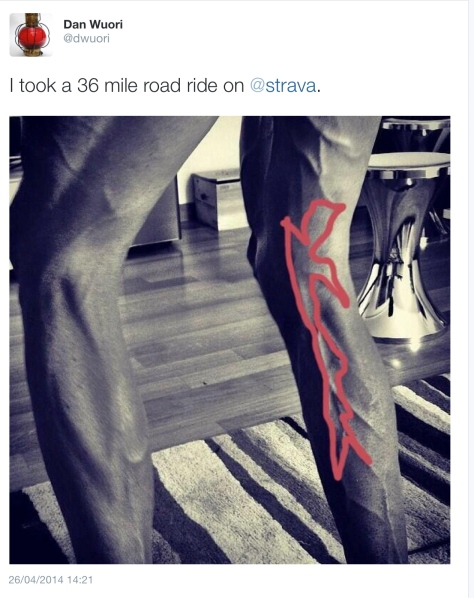 Kickin’ your ass all over Strava

Here is a rider who embodies the phrase ‘fierce joy’. Marianne Vos is a warrior – and is a gracious world champion who is as thrilled with a teammate’s win as with her own. #QueenClass

What a sweet little face. (End of #KwiatKrush tweets now … for this week.)

Jens has gone into bunny-making. If the bunnies are as prolific at reproduction as he is (he has about 400,000 kids), then Germany will soon be overrun by wascally wabbits.

Looks to me that Rosalie’s hutch is a hell of a lot bigger than my flat. But my toilet isn’t in the corner of my living room, so I think I win.

It doesn’t come much scarier than this.

I bet Didi would make a great Santa Claus. Red is definitely his colour.

In the WTF department, we have some sort of Peter Sagan presentation. Unsure as to why he’s wearing an ill-fitting blazer and white gloves. But even scarier than that are the – are they bouncers? – at the lip of the stage with the face paint. Are they trying out the new amphibious look?

Another great photograph by Emily Maye. 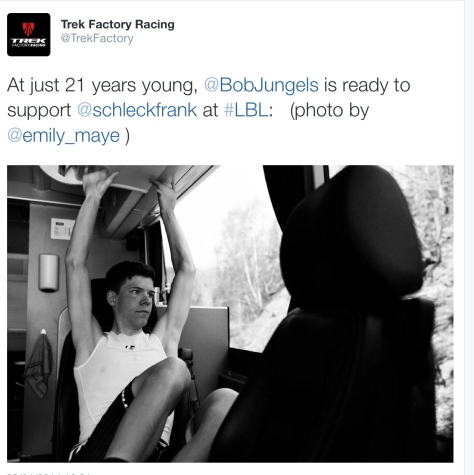 You can’t unsee this, can you? I’m sorry. But I had to share the pain. Why? Why would you go out of your house like that? 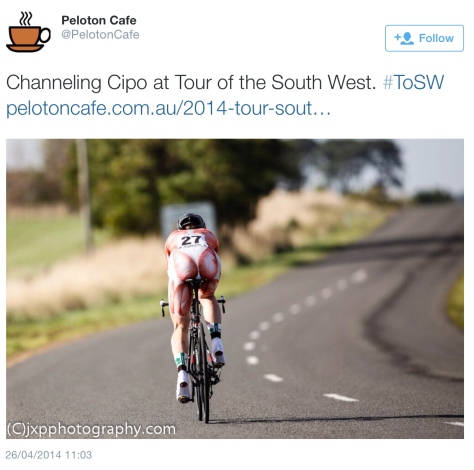 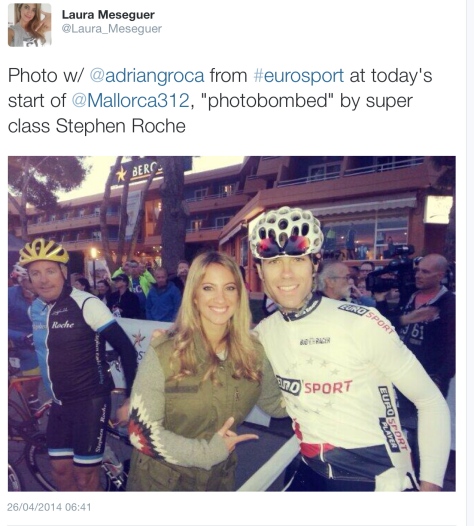 What a fabulous picture! Hugo Koblet, one of Switzerland’s greatest riders, knows where his priorities lie. Gotta get the hair right!

It ain’t Tweets of the Week without a rider road rash selfie. Ouch. (Personally, I prefer this picture to that one of Froome’s vascularity…)

Wasabi Samurai … what is it with people painting portraits of cyclists in sauce? We had PhilGil in tomato sauce last week. What’s next? Cavendish in mustard next week? 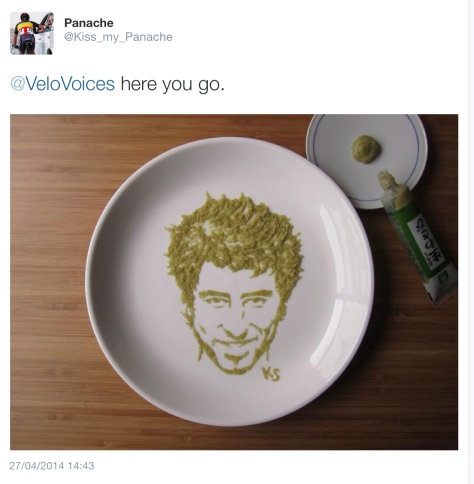 Speaking of Cav, here he is receiving his stage win prize at the Tour of Turkey. A nice gesture, but it’s no piglet!

And here is Cav officiating at the Great British Spelling Bee. “Your word is amphibian. Amphibian.”

A tattoo of Bauke Mollema on your calf. Thing about that for a moment. 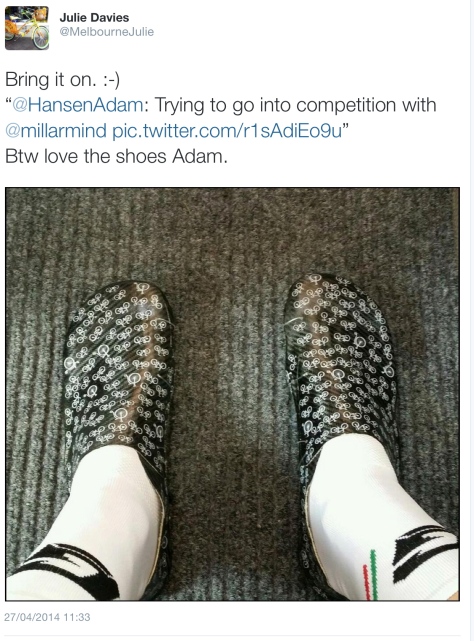 I want one of these posters. Flanders, make it so! 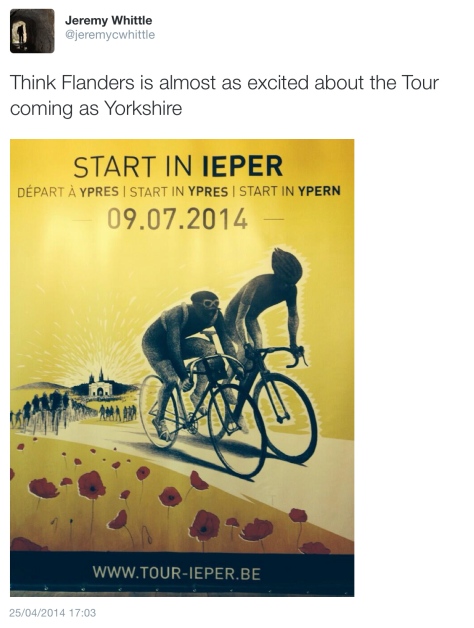 Albert Einstein was a genius, you know. 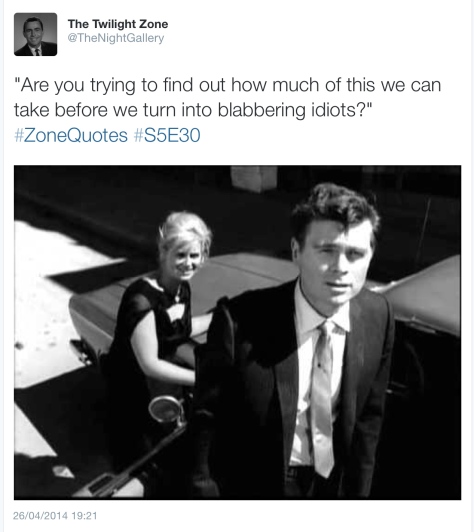