Oh, from the cobbles to the climbs – we’re in Ardennes Week now. This week’s tweets include velvet thrones, saucy portraits, peloton faces and #CostaCrush! Plus, we have a few yummy leftovers from Roubaix and assorted other cycling hijinks.

With Easter falling so late this year, it’s not Roubaix that had the treats but Amstel Gold. If there’s one thing cyclists love, it’s chocolate. Keep your eye on that bunny. 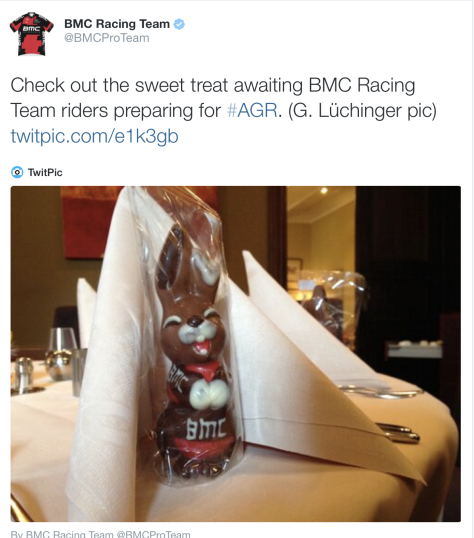 My #CostaCrush just gets bigger each day – especially when I see pictures like this of Rui taking time out for small fans. However, I would say, that’s a lot of white. You know, he kind of looks like the exact opposite of Milk Tray Man.

I suspect this is not the last we’ll see or hear of pandas this week. 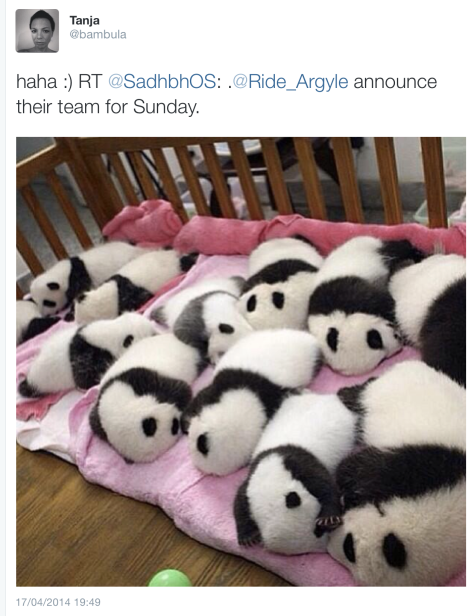 This picture makes me laugh – with their black snoods they look like bandits getting ready for a heist. Snoods or no, they sure didn’t steal the race on Sunday. >snare cymbal< I’m here all week! Don’t forget to tip your waitress! 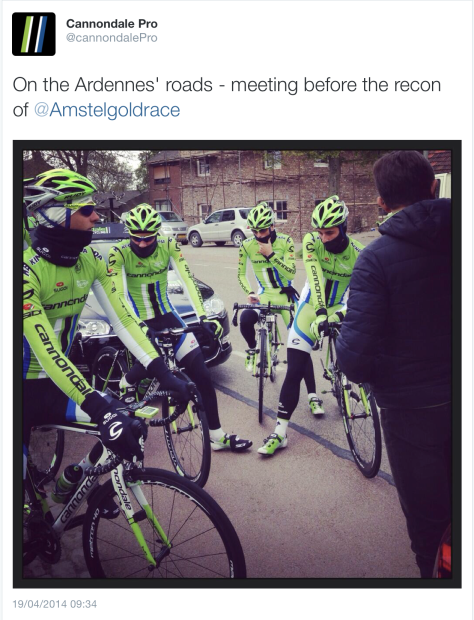 Well, Roman, I hope you savoured it because in a little while we’ll see what happened in the race and your fearless (or should that be fearsome?) leader’s reaction to no Tinkoff rider on the podium. I suspect it’s going to be a long and volatile summer.

So the cute mini-Gilbert must have raided the BMC dinner table the night before.

I would be so afraid that I wouldn’t let go of the musette in time and basically cause a peloton-wide crash. I really do worry about things like that.

The roar of the parcours. 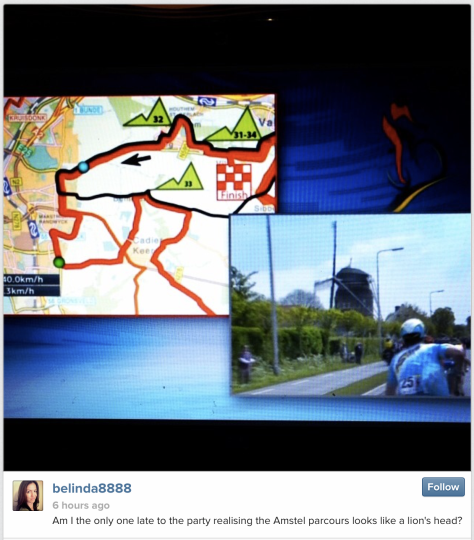 This just absolutely had to go in.

Luckily, Purito didn’t break any bones and, at the time of writing, is on the start list for Fleche. But, squawk, that must have hurt. 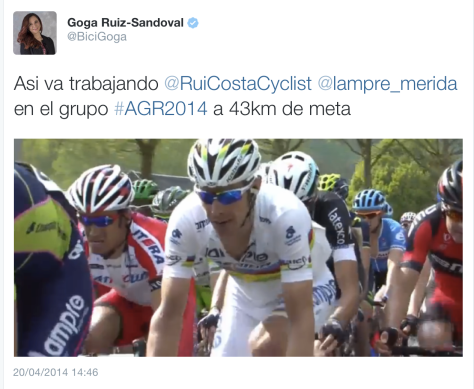 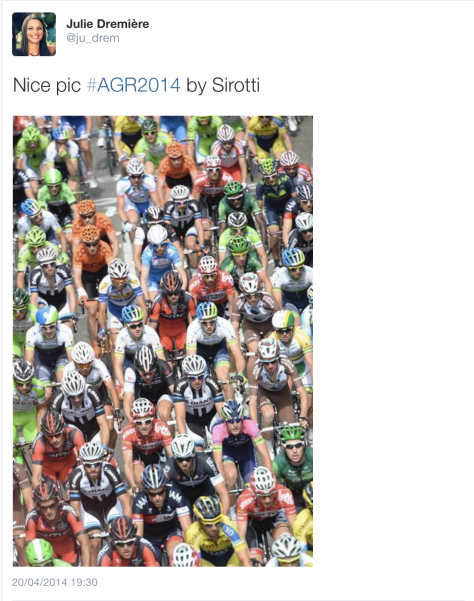 I love this picture. If you look closely, however, you will see that there’s a message to Andy Schleck on the road. He didn’t see it. We’ll get to that in a minute. 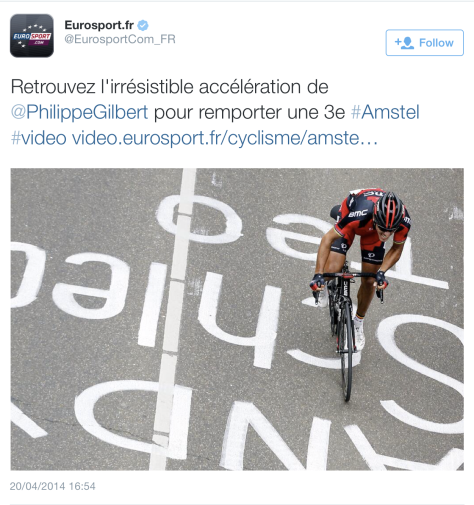 PhilGil was once the King of Belgium. He may very well be so again after this week. 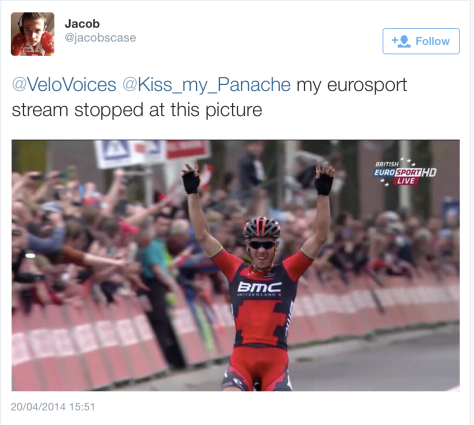 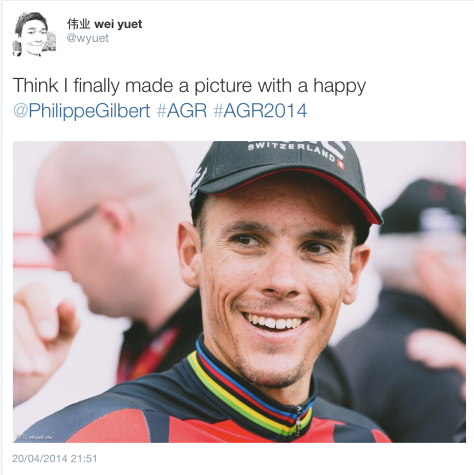 The victory is that much sweeter when you get to sit on a plush red velvet throne! “Bring me all the energy gels and recovery drinks in the land!” 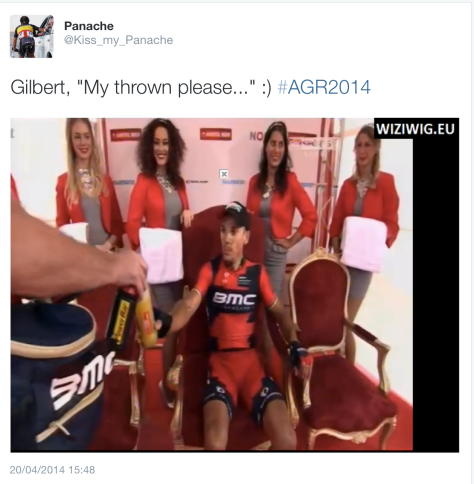 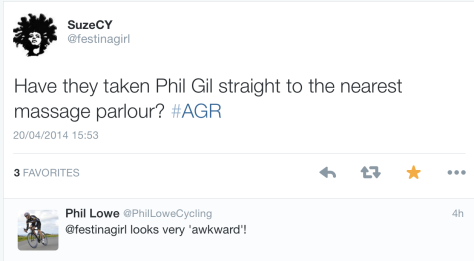 Okay, who’s crafty out there?! I want one of those beer mat skirts – who’s going to make one for me? (My futile attempt last year amounted to a trip to the recycling bin with 150 beer mats.)

So, not only are there red velvet thrones, but a cold glass of Amstel is brought to the podium to be downed by the thirsty winners – PhilGil emptied his glass without taking a breath. Rumour has it that Simon Gerrans did not finish his drink.

Unsure as to if this is a good stat or not.

Remember Roman Kreuziger and his number one? Oh deary, deary me. I don’t think the Tinkoff boys got any chocolate bunnies at their place settings after the race. >toot toot< It’s the Tinkov Crazy Train pullin’ out of the station and on its way to France!

I think the announcement of Sky’s ‘cracking the classics’ last week was a bit premature. But the overly optimistic – some would say deluded – PR spin on the race was priceless.

No jokes. The look on Andy Schleck’s face is heartbreaking. 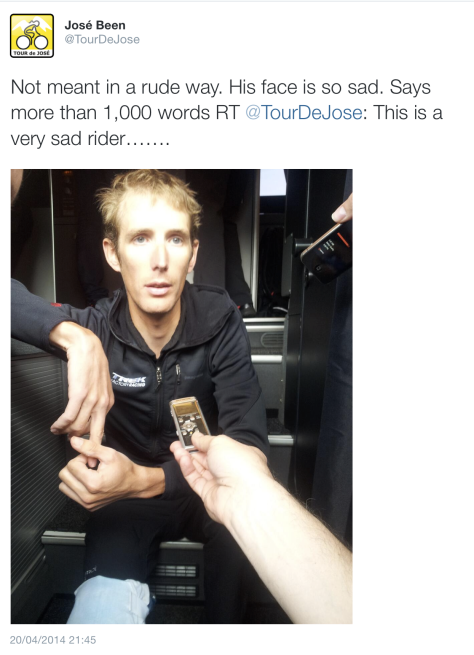 It’s all about the effort – as you can see in these expressions.

Is Simon Geschke trying to compete with Thomas Voeckler on tongue photo ops? 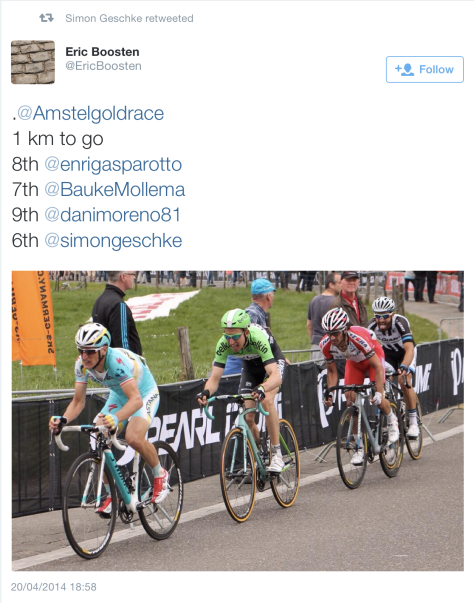 You know those stories of people seeing the Virgin Mary in tomatoes? Well, cycling fans see PhilGil in their tomato sauce. 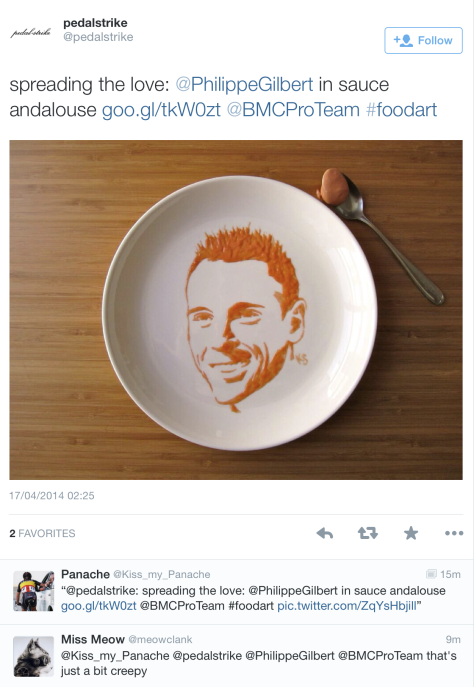 How cool is it that the 100xWorld Champion goes on group rides that are open to beginners and pros alike? 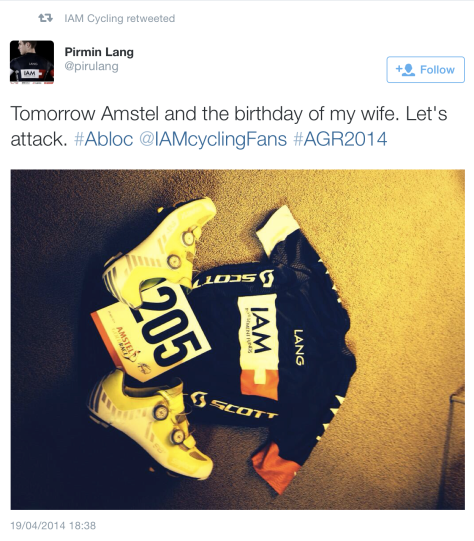 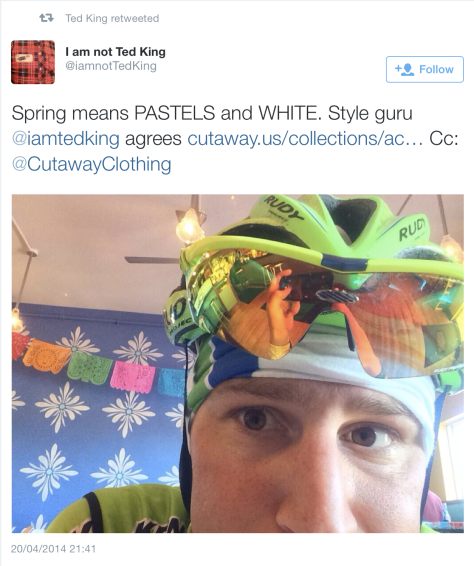 As I said last week, I don’t need an excuse to put in a picture of Manuel Quinziato.

Nibbles looks happy – as do his fans! 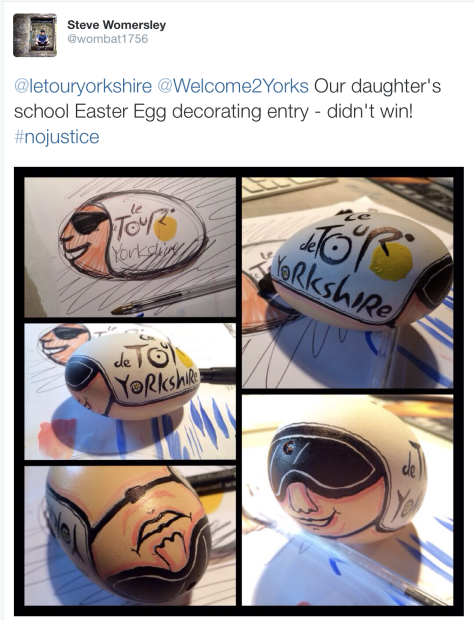 A couple of Koen de Kort Roubaix pics that missed the cut last week – but I liked them so they go in this week.

PhilGil gets a throne. Pierre-Luc Perichon gets a little piglet.

Weebles wobble but they don’t fall down. (The eyes on the Thomas egg have that hypnotised look.) Do you think Sky was in on the Cannondale jewel heist?

The Kazakh version of a Yorkshire flat cap. Alexandre Vinokourov is getting ready for July!