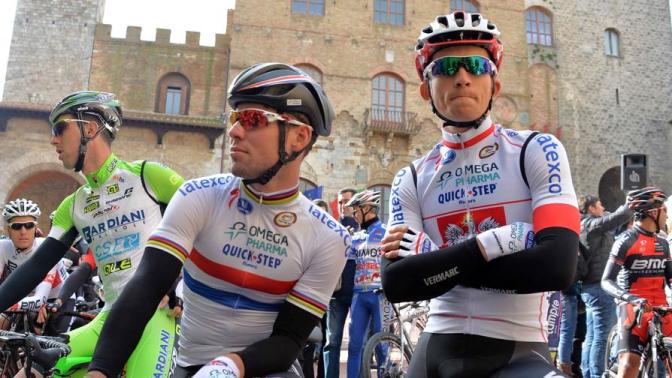 Michal Kwiatkowski exploded away from Peter Sagan on the steep streets of Siena to upset the odds and take Strade Bianche glory. The Pole was red-hot on the white Tuscan roads in taking the biggest one-day victory of his young career. 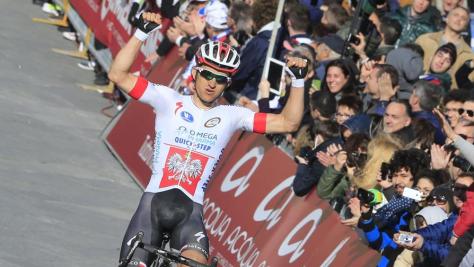 Michal Kwiatkowski (Omega Pharma-Quick Step) certainly isn’t an unfamiliar face in the pro peloton. The 23-year-old impressed throughout last season, finishing in the top five of two Ardennes classics before taking 11th overall in the Tour de France. But if anyone thought last season was an anomaly, they can think again. In Kwiatkowski it’s clear OPQS have a genuine climbing force but, perhaps most excitingly, an extremely versatile rider.

BLOG: Who is Michal Kwiatkowski?

He broke clear of the rest of the contenders alongside Peter Sagan (Cannondale) with over 20km remaining. Both contributed to the efforts on the front and arrived in the narrow, twisting streets of stunning Siena with an unassailable lead. In that position, Sagan – a superior sprinter and seemingly a better punchy climber – was strong favourite. But, with a sudden stomp on the pedals the Pole broke clear, Sagan’s hopes of winning blown in an instant.

Considering he’s also demonstrated a brilliant talent for the mountainous climbs and a time-trialling affinity, it’s clear that he’s a brilliant all-rounder. The scary thing: at 23 he’s only going to get better. This is surely the first of many big wins.

La Gazzetta dello Sport‘s preview of this race was ‘Cancellara contro Sagan.’ They thought it was going to be a straight scrap between two of cycling’s classics heavyweights. Sagan may not have won the race, but he did at least go very close. Fabian Cancellara (Trek), meanwhile, was nowhere to be seen. He eventually finished down in sixth, seemingly incapable of responding to the decisive attacks.

His top spring priorities are, no doubt, Paris-Roubaix and the Ronde van Vlaanderen. But it was disappointing we didn’t see more of the two-time Strade Bianche winner here. Admittedly, however, he was hindered by a lack of chase behind, with none of the other favourites coordinating effectively after the lead duo made their move pursued by third-place finisher Alejandro Valverde (Movistar).

Any hardened cycling fan would no doubt find a perverse beauty in the industrial wastelands of northern France, or the cracked cobbles of the Ardennes, but the wonder of the rolling Tuscan hills is plain for all to see. This year the racing wasn’t quite edge-of-the-seat stuff – save for the decisive move there wasn’t much jostling between the favourites – but the strada bianca always makes the racing unpredictable and exciting – though perhaps less so for the unfortunate fallers.

It is as if this race has absorbed a mythical aura from its setting, despite this being only its eighth edition. If you didn’t know, it’d feel like a century-old cycling institution. The brilliant field it has attracted once again is indicative of its appeal, with its slippery white gravel roads presenting a unique challenge for the riders. Roll on 2015!

Race at a glance

10 – The number of dirt sections that the riders had to pass over, spread throughout the race’s 200km.

7 – Michal Kwiatkowski is the first ever Polish rider to win Strade Bianche and the seventh different nationality to win the race in its eight editions. Switzerland’s Fabian Cancellara is the only rider to win it more than once.

19 – In seconds, the advantage that Kwiatkowski managed to open up over Peter Sagan over the final kilometre.

5 – It is the fifth win of the season for the prolific Pole, who won the Trofeo Serra de Tramuntana in February before winning two stages and the overall classification at the Volta ao Algarve. Only Andre Greipel, with six, has more victories so far in 2014.