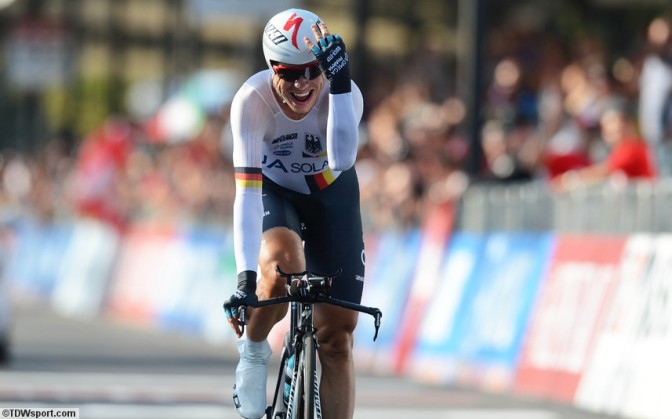 In the longest men’s individual time trial the Worlds has ever seen (57.9km), Germany’s Tony Martin defended the rainbow jersey, but it was the fight between Fabian Cancellara and Bradley Wiggins that held the most drama, with Wiggins taking silver by 2.25 seconds. 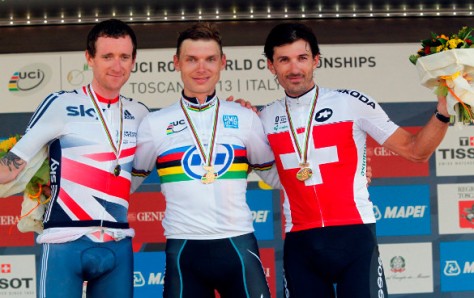 For the second year in a row the men’s time trial had everyone on the edge of their seats. Last year, it was the battle between Martin and Phinney on a challenging course that left both on the ground and heaving for breath. Martin won that battle by five seconds.

This year, Martin was never in danger of losing his crown, bar a mechanical or crash, but it was the battle for the silver that held the audience’s attention throughout. Cancellara led until the final few kilometres and with no time checks available (radios are not allowed in the Worlds), it was neck-and-neck to the finish line.

How far can Martin go? With three consecutive championships, Tony Martin will go down in history as one of the greats against the clock. If he wins the rainbow jersey again next year, he will tie the record set by Cancellara of four titles. And who knows how many he could clock up before his career ends?

But is that all Martin wants to do, one wonders? While Cancellara has been winning against the clock, he’s also made a name for himself as a legendary classics rider as well as collecting the most yellow jerseys at the Tour de France without actually winning the race. Martin, on the other hand, doesn’t have this type of record.

So what kind of rider could he develop into, if he shifted his emphasis? There was speculation this year that he could become a serious grand tour contender, but to do that, he would need to lose a lot of weight – consider what Bradley Wiggins looked like last year and what he looks like now. Would he be willing to sacrifice what looks like almost sure (and prestigious) wins for what is always going to be a very hard road where luck plays such a crucial part? It’ll be interesting to see what next year brings for the Panzerwagen.

Can you become a legend in an hour? There was a lot of expectation that Bradley Wiggins would win the TT today. Wishful thinking on the part of his many fans as he would have needed to vanquish not one but two world champions. However, this might make him take on the challenge that many say he’s training for anyway – and one that would, if he succeeded, seal his legendary status: the Hour record. I would put money on the fact that, in the next six months, in a velodrome somewhere in the world – hey, Manchester has a good one, as does Glasgow – Wiggins will have a go.

One more for the road, Fabian? It is testament to Cancellara’s time-trialling talent that he picked up the bronze medal in a race that he really wasn’t even targeting this year. He gave it all out on the road because, well, he would, wouldn’t he? But it’s Sunday’s road race that he’s got his eye on – and word amongst the team buses in Florence says he’s the hot favourite to take the rainbow jersey. Will today’s race turn out to be a great training run? Or will the all-out effort take the edge off his form? We’ll find out in a few days’ time. If he wins, I won’t let anyone forget that I tipped him for this title at the beginning of the year (and was mocked). If he doesn’t win, well, I’m used to the mocking now.