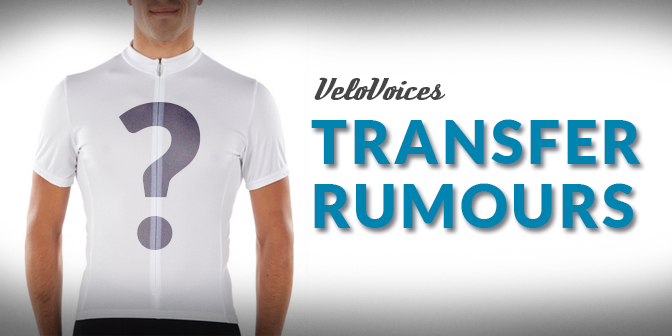 Cycling’s transfer season is well and truly under way. With the rumour mill grinding, I’m taking a look at who’ll be where next year.

Two of the most interesting young British talents around at the moment are twins Simon and Adam Yates, who whet the appetites of various pro teams with an impressive showing at this year’s Tour de l’Avenir – essentially the young riders’ Tour de France. The highlight was an incredible one-two in a mountainous stage to Morzine, with both twins crossing the line together, arms aloft. Simon finished second overall.

It is little surprise, therefore, that there have been a few WorldTour teams ready to get their cheque books out. Back in August, it was rumoured that the twins would be separated, with Simon joining Sky and Adam heading to France to join FDJ. However, writing in the Guardian on Friday, William Fotheringham stated that “well-placed sources maintain that the Yates brothers have signed for Orica-GreenEDGE”, adding more intrigue to the story.

Will it happen? The only thing we can be pretty sure about is that we’ll see the Yates twins in the WorldTour peloton next season. Quite where, it’s anyone’s guess. The obvious choice would be for them to join Sky, given that they’re British, and Dave Brailsford’s track record of developing young riders. However, if he’s only offering a spot to Simon, perhaps they’d prefer to stick together and join GreenEDGE. It looks like tough decisions need to be made.

LL Cool Sanchez could be heading to Movistar (Image: Wikipedia)

According to Eurosport.pt, two riders who could join Movistar next season are experienced Spaniards Luis Leon Sanchez and Juan Antonio Flecha.

The former is currently riding for Belkin, though he hasn’t enjoyed a great season, only picking up one victory – a stage of the Tour of Belgium. What’s more, his relationship with his team may have been strained after he was suspended indefinitely in February surrounding reported links with notorious doctor Eufemiano Fuentes, only to be reinstated a few weeks later. The 29-year-old could be heading back to the team he left at the end of 2010, then under the Caisse d’Epargne title.

Vacansoleil’s Juan Antonio Flecha has, in contrast, had quite a good season, even if he hasn’t managed to pick up any victories. The 35-year-old has been active in several breakaways, picking up combativity prizes in the Tour de France and the Vuelta a España after a top ten at Paris-Roubaix. With his current team set to fold at the end of the season, he’d make a great capture for Movistar.

Will it happen? Both of these riders would be smart signings, with Sanchez excellent in the hilly one-day classics and in time trials, and Flecha still a great rider for breakaways and the cobbled classics – an area where Movistar are lacking in top talent. The only question is whether there’s any room to fit them into the 30-man roster. With Javi Moreno and Juan Jose Cobo reportedly likely to be released, there may well be.

Sadly it’s not just Vacansoleil and Euskaltel-Euskadi who are having sponsorship issues, but French Pro Continental outfit Sojasun are struggling too. Despite a strong, aggressive showing at the Tour de France and team boss  Stephane Heulot “working night and day to find a new sponsor”, as of yet none are forthcoming. “Our performance in the Tour has increased the interest in the team, but the general economic situation is still very, very delicate and a lot of companies are hesitant to enter the sponsorship market,” Heulot told Tuttobiciweb.it.

Now, fellow French Pro Conti outfit Cofidis have moved to snap up two of Sojasun’s best riders, according to L’Equipe. They’ve reported that 27-year-old team leader Julien Simon and 30-year-old veteran Cyril Lemoine will both move to Cofidis for the new season, with things looking ever bleaker for their unfortunate teammates. Losing such important riders is hardly conducive to attracting new sponsors.

Will it happen? This, unfortunately for Sojasun, looks likely. Both are powerful riders capable of picking up decent results, and will bolster Cofidis’ posse of French riders. Sojasun still have strong climbers like Brice Feillu, Jonathan Hivert and Julien El Fares on their books, though sadly things aren’t looking good for Stephan Heulot’s outfit. This could be the final nail in the coffin.

Lampre look to Oliveira of RadioShack

Lampre have arguably pulled off the coup of the transfer market so far by nicking Rui Costa from Movistar, though they’re not content to stop their winter wheelings and dealings there.

They’ve now reportedly turned their interest to Nelson Oliveira of RadioShack, with the former Portuguese national time trial champion having had a quiet couple of seasons at the American outfit. However, Oliveira is still only 24, and undoubtedly has potential. He completed the Giro d’Italia this season, with his highlight being a 17th place finish on the long first individual time trial,

Will it happen? With RadioShack-Leopard undergoing a clearout ahead of next year’s rebrand, Oliveira could
easily be released this winter. One sticking point over any move to Lampre could be that they are reportedly looking to stock up on riders with WorldTour points with their licence ending this year, though whether there’s any truth in this remains to be seen.