Who’d have thought it? Chris Horner said he was going to get the leader’s red jersey back and he did just that when he zipped off the front with 5km to go and maintained an advantage of over 40 seconds to claim his second solo stage win, reclaim the red jersey and take the lead in the mountains and combined classifications. Pensioners of the world rejoice – well, maybe middle-aged men in lycra. 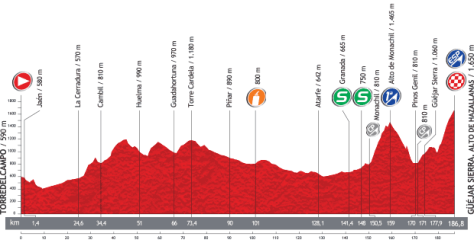 The race was red-hot and spicy from the start and it took 40km of aggressive, fast-paced, frenetic racing before the ten-man break was established. This included riders of the calibre of Juan Antonio Flecha and Tomasz Marczynski (both Vacansoleil-DCM), Diego Ulissi (Lampre-Merida) and Georg Priedler (Argos-Shimano). They built an advantage of six minutes before the mighty trio of RadioShack-Leopard, Movistar and Katusha began to rein them back in.

The break fell apart on the first big climb, the cat 3 Alto del Purche, as Ulissi, Priedler and Marczynski went clear over the top with just under 30km to go. Marczynski subsequently soloed off on the hors categorie Alto de Hazallanas – getting its maiden airing in the Vuelta – but he too was back in the select chasing group just before the 5km mark. Showtime!

RadioShack-Nissan’s Horner attacked, building an advantage of over 40 seconds as the 41-year-old effortlessly pedalled out of the saddle up the testing gradient, defying Father Time once more. He had jumped out of a select group of riders as guys had been shelled out the back of the bunch thanks to the punishing pace set firstly by teammate Fabian Cancellara and then Alejandro Valverde’s Movistarlet troops. One casualty of the relentless speed was overnight race leader Dani Moreno (Katusha) as he slipped slowly out of contention while the team’s leader Joaquim Rodriguez kept pace with the leading group.

With just over 2km to the finish, Nibali attacked but was unable to make any real inroads into Horner’s advantage, although he did put time into his closest rivals. Valverde sprinted to third place and the final bonus seconds on offer, at the head of the chasing quartet that had been unable to follow either Horner or Nibali on the fearsome climb.

My rider of the day is only an amateur but a talented and powerful presence on the bike as much as he is behind the steering wheel of his F1 Ferrari. Yes, it’s Fernando Alonso who’s come to the rescue of our beloved Carrots. He’s taking over the Euskaltel-Euskadi team in the nick of time, honouring existing contracts and moving the team’s base to Oviedo – his and Samu Sanchez’s home. As soon as the news was broadcast at around midday today, the timelines of anyone who follows cycling were flooded with expressions of relief and grateful thanks. Of course F1 is hugely popular in Spain but I think Alonso has just found himself a whole new bunch of supporters around the globe, particularly in the Basque country.

The wonderful news lifted spirits in the orange-clad team who were top squad on the day with Igor Anton, Mikel Nieve and Samu Sanchez all finishing in the top 20.

We said in our preview that today’s punishing stage would be pivotal for the overall and we were right. The Alto de Hazallanas proved hazardous for some riders’ overall ambitions and a godsend for others.

Even though Chris Horner reclaimed red with a magnificent solo ride, Vincenzo Nibali, who vowed he was only at 75% at the start of the Vuelta, has hit his stride ahead of the first rest day and succeeded in putting precious seconds into his nearest rivals, Alejandro  Valverde, Joaquim Rodriguez (Katusha) and Ivan Basso (Cannondale).

Hanging with the best on the final climb was Thibaut Pinot (FDJ), showing his 2012 result in the Tour de France was no flash in the pan. Former red jersey wearer Nicolas Roche (Saxo-Tinkoff) may have lost a few seconds, but he too remains in contention along with Giro d’Italia star Rafal Majka (Saxo-Tinkoff) and Domenico Pozzovivo (Ag2r La Mondiale).

Sadly, the Colombians appear to have run out of steam. Carlos Betancur (Ag2r) has been unwell and far from his best, while both of Sky’s boys – Giro d’Italia runner-up Rigoberto Uran and Sergio Henao – have looked off the pace.

No need to suffer Vuelta withdrawal symptoms on the race’s first rest day. Tim, Kitty and Panache will be dissecting stages one to ten and predicting what might happen in the coming week on tomorrow’s unmissable podcast.