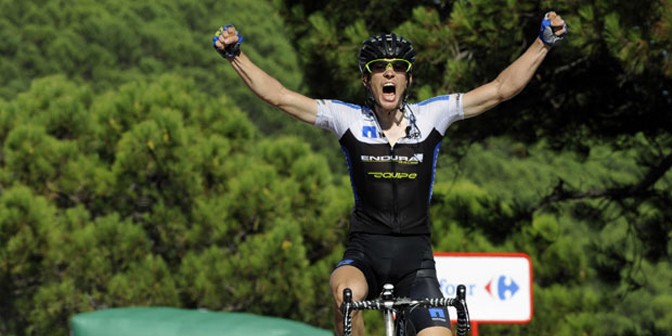 Leopold Konig has already marked himself out as one of the top climbers to watch in this Vuelta, coming close to winning stage two, then riding to victory in yesterday’s eighth stage. But who is this explosive 25-year-old climber, and where has he come from?

The story so far

If you’ve followed the sport closely, Konig is hardly an unknown quantity, although the fact that he rides for a second-tier team in NetApp-Endura means that this is the first opportunity we have had to see him at a grand tour. He started riding for a local Czech team, PSK-Whirlpool, as an 18-year-old in 2006, recording steadily improving results in lower-ranked races before a 2010 season where a stage win at the Tour of Bulgaria and overall victory at Oberösterreichrundfahrt – yes, I’ve never heard of that race either – prompted a move to the Pro Continental squad NetApp.

It was a big step up in 2011, but Konig took to the challenge like the proverbial duck to water with an impressive run of late-season form. He finished second overall at the 2.HC-rated Tour of Austria, behind Astana’s Fredrik Kessiakoff but ahead of notable names such as Carlos Sastre, Denis Menchov and his own team leader Jan Barta. He then went on to record third overall at the mountainous Tour de l’Ain, finishing third on the queen stage to Le Grand Colombier, and a creditable ninth at the Tour of Britain.

His progress continued unabated in 2012 as he made the most of limited opportunities to shine in some notable races: third at the Tour of Utah and ninth again at the Tour of Britain, where he won the stage up Caerphilly Mountain by outlasting eventual overall winner Jonathan Tiernan-Locke.

And this year has been more impressive still, with victory on the queen stage of the Tour of California up to the summit of Mount Diablo, where he powered away in the closing stages to finish ahead of Janier Acevedo (who is being linked with a move to Omega Pharma-Quick Step) and eventual overall winner Tejay van Garderen.

I looked at the profile of the climb and planned out this attack. When you’ve got your whole team pulling for you, it gives you extra motivation. This victory is a dream become reality.
Leopold Konig, after winning stage 8

He has kept relatively quiet since then, with low-key results at the Criterium du Dauphine and Tour of Poland, but has clearly timed his form to perfection for this Vuelta, where he has enjoyed the full support of a NetApp-Endura team determined to make a mark as a wild-card entrant.

He attacked perhaps 400-500 metres too soon on the race’s first summit finish on stage two and ended up watching Nicolas Roche steam past him as he slipped down to fourth. But yesterday’s attack on the Alto de Penas Blancas was perfectly timed, as he turned the tables on Roche with an unstoppable charge to his maiden grand tour win. He now also stands second in the mountains classification (behind Roche).

At a mere 62kg, he’s of a size that puts him very much in the same category as the other pure climbers whose domain is the steepest mountain gradients. And with a name like Konig – which translates as ‘king’ – it would be fitting if he emerged from this Vuelta with the king of the mountains jersey. That is certainly a realistic possibility, as is a strong top ten finish in a race which looks as wide open as any grand tour has been for some time.

The podium is probably asking a bit too much, but for a wild-card team to put a man into the top ten would be a fine achievement – and such a finish would confirm him as a desirable talent for bigger teams to potentially recruit. He would be an intriguing fit at, for example, Omega Pharma-Quick Step, a team looking to reshape their squad to sustain a GC challenge behind new signing Rigoberto Uran, and one already containing two Czech riders in Zdenek Stybar and Frantisek Rabon.

The next two weeks should give us a clearer indication of the kind of rider Konig could become, starting with today’s summit finish at Valdepenas de Jaen. He has already shown that he can produce sudden accelerations at the end of long, grinding climbs such as yesterday’s. Now can he also punch up the short classics-style ‘walls’ such as today’s finish? If so, then we could be looking at a rider with the potential to compete both for the overall in stage races but also the more vertical one-day classics such as those in the Ardennes, San Sebastain or Il Lombardia. With many of the regular contenders for such hilly races – Rodriguez, Valverde, Gilbert, Gerrans, Luis Leon Sanchez – now the wrong side of 30, the door is open for a new generation of riders to stake their claim. Konig is likely to be near the front of that queue.

Keep your eye on Leopold Konig. This Vuelta is likely to be no more than a stepping stone to bigger and better days.