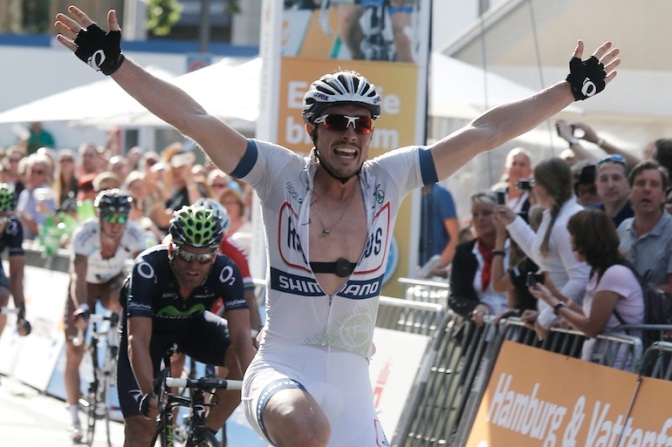 John Degenkolb held off the charge of his compatriot, German national champion Andre Greipel, by a bike length to record the first home win in Germany’s only WorldTour event since Erik Zabel in 2001. Norwegian Alexander Kristoff rounded out the podium.

At the finish a delighted Degenkolb said:

The team did a great job the whole day today. I felt really good during the race and had some good power left at the finish and the team believed in me today.  On the run-in the team were great. We had to bring back a strong move and then they dropped me off perfectly for the sprint.

The sun shone as the race generated a ding-dong battle of ultimately fruitless attempts to avoid the inevitable bunch sprint finish. The initial break comprised Garikoitz Bravo (Euskaltel-Euskadi), Jonas Aaen Jorgensen (Saxo-Tinkoff), Julian Kern (Ag2r La Mondiale) and Michael Schwarzmann (NetApp-Endura). The foursome slipped away early on and built and quickly built an advantage of over seven minutes before being slowly pegged back by the combined efforts of FDJ, the team of defending champion Arnaud Demare, and Greipel’s Lotto-Belisol.

As the foursome hit the Waseberg climb for the first time on the last of the many circuits around the city of Hamburg, the gap was under four minutes. Shortly afterwards they had company as 11 counter-attackers including Koen De Kort (Argos-Shimano), Michal Kwiatkowski (Omega Pharma-Quick Step), Daryl Impey (Orica-GreenEDGE) and Yoann Offredo (FDJ) bridged across.

Sensing the growing threat, Garmin-Sharp and BMC drove the peloton and at the start of penultimate loop, with 53 km to go, the large break was only 20 seconds ahead and subsumed a few kilometers later. Next to try his luck was Manuele Boaro (Saxo-Tinkoff) who soloed off and rapidly built a 15-second lead. This led to a flurry of counter-attacks and finally Rick Flens (Belkin) managed to join him with 45km to go.

The duo started to widen their advantage on the second ascent of the Waseberg but this time it was Sky who took charge of the peloton and swept them up. But this was just the start. Now Sep Vanmarcke (Belkin) attacked over the summit and was quickly joined by Manuel Quinziato (BMC), Ian Stannard (Sky), Niki Terpstra (Omega Pharma-Quick Step) and Wouter Mol (Vacansoleil) over the top of the Waseberg. Inexplicably and almost immediately called to heel, Quinziato dropped back only to be overhauled by the counter-attacking trio of Tim Wellens (Lotto-Belisol), Michael Albasini (Orica-GreenEDGE) and Ion Izagirre (Euskaltel-Euskadi). The Carrots might be disappearing at the end of the season but they were making their presence felt in Hamburg.

Cesare Benadetti (NetApp-Endura) and Daniele Pietropolli (Lampre-Merida) made the trio a quintet but the five riders couldn’t make the junction to the leading quartet. With 25km to go, the gap was 15 seconds to the chase group, with another 15 seconds back to the peloton.

On the approach to the final climb of the Waseberg, the two front groups became one but the peloton was bearing down on them, only 25 seconds back. Lack of co-operation in the break prompted Izagirre to attack on the steepest part of the climb but it was former Dutch champion Terpstra who began the shade-dappled narrow descent alone and, with only 15 km left, he went into time trial mode on the road back into Hamburg with the peloton, led by BMC and the Argonauts, in hot pursuit. But everyone was back in the bunch, including Terpstra, just 8km from the finish.

It was RadioShack-Leopard’s turn to take charge with Katusha tail-gating. With 4km to go it was time for Vacansoleil to put their contract-seeking riders in the limelight. Not to be outdone, FDJ edged forward hoping to successfully defend Demare’s crown but their challenge was extinguished under Katusha’s impetus, leaving just Offredo leading out Argos-Shimano.

Daniele Bennati (Saxo-Tinkoff) was the first to light the blue touch-paper – too much, too soon. As Bennati faded, Movistarlet and former national champion Fran Ventoso launched his sprint. But then Degenkolb went from what looked to be too far out as Greipel and Cannondale’s Elia Viviani tried to draw level. However, the recently married 24-year-old was not to be denied and he took only his second victory of the year after his stage five victory in the Giro d’Italia ahead of Greipel and Katusha’s Alexander Kristoff. It was Greipel’s second consecutive runner-up spot but he admitted he just didn’t have the legs.

Those with form from recent races, such as the Eneco Tour, unsurprisingly featured in the overall result. The surprise was perhaps the winner but as we know from last year’s Vuelta, he’s often on his best form in August! There’s not a lot more one can say. Other than to wish Argonaut Koen de Kort a speedy recovery. He went down about 30km from the finish and broke his left collarbone, having broken his right one in the Tour of Qatar early in the season.