The Tour de France swept over us like a technicolour torrent of Haribo thrown from the publicity caravan, and although we’ve all crashed from that cycling sugar-high, we’ve got one last job to do: decide on our Rider of the Month for July. After such a wonderful festival of bike racing, we’re not short of candidates! So gather round and let’s see who we think stood out from the crowd last month.

An attacking display of power from Chris Froome makes him Sheree’s Rider of the Month (Image: ASO)

It’s July, it’s the Tour, it’s our monthly awards and there can surely only be one winner: Chris Froome. Like last year’s winner, he seized the yellow jersey on stage eight and never looked like losing it. He won three individual stages and didn’t just defend his lead, he attacked to put time into his rivals. Despite losing two key riders – Edvald Higgs Boson Hugo Boss Haagen Dazs (broken collarbone) and Vasil Kiryienka (outside the time limit) – and with Geraint Thomas riding injured, the team put in an impressive performance to secure Sky and Britain’s second consecutive Tour victory. Chris delighted French viewers by speaking French and said all the right things during the Tour. A model winner who assured us his victory would stand the test of time and a triumph that capped a scintillating season for the Brit. Looks as if it might be the first in a long line of grand tour wins.

Geraint Thomas made pain and suffering his own this Tour de France (Image: Sky)

At the risk of turning this into a Sky love-fest, I’m going to put Geraint Thomas forward. The Tour throws up many stories and I was finding it difficult to choose between so many worthy riders, but I think Sheree just swayed me in favour of the hardest man in Wales. Thomas must have spent his winter running underneath ladders, because Lady Luck seems to have had it in for him. He fought through the team time trial with a fractured pelvis (having better luck than Ted King in finishing within the time limit), and even though everyone, including his own mother, begged him to give up, he managed to complete the Tour and play a part in delivering Chris Froome to the top step of the podium. The guy has had knock after knock this season, but you never hear him moan, he just gets on, clips in, and stoically refuses to be beaten. Chapeau.

A rider who showed great promise at last year’s Vuelta has delivered beyond all expectations. After winning the Vuelta a Pais Vasco earlier in the year, Nairo Quintana has now excelled on the biggest stage of all. Second place and a stage win at the Tour de France is richly deserved for the only rider capable of matching – and sometimes passing – Chris Froome on the climbs. It can’t be too long before we see the maillot jaune on his shoulders.

Marcel Kittel won four stages, including the biggest prize of all for a sprinter – the win on the Champs. (Image: ASO/B Bade)

My nominee for rider of the month is Marcel Kittel.  What a July he has had! He should win rider of the month based on his hair alone but his race results speak for themselves, winning a whopping four stages. He claimed the first stage in Corsica to grab the yellow jersey for a day, outsprinted everyone to win stages 10 and 12 in commanding style, then won the final stage in the Parisian twilight by a wheel length ahead of Mark Cavendish and Andre Greipel. Marcel Kittel has provided ample evidence that he might actually be the new fastest man in the world.  (Sorry, Tim.) 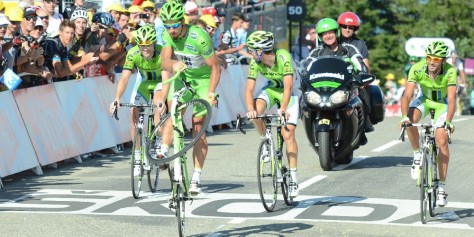 I picked Peter Sagan because, in terms of going after his goal of winning the green jersey for the second year running, he was as ruthless and driven as Froome and, like Froome, he pretty much accomplished his mission well before the final stage in Paris. He showed he has a good tactical brain – realising his own strengths do not lie in pure sprinting power like Kittel and Cav, and shutting down any possibility of a threat from Greipel who was one of the only other sprinters who actively went after intermediate points. Unlike Cav, who seems to lose interest if he isn’t at the glory end of the stage, Sagan made sure he was in the top five of pretty much every single one of the sprints. Therefore there was not a day that went by that he did not continue to gain an advantage over his rivals in the points competition. And he also knew that a great sporting performance is even more memorable when you do it with a joy and an enthusiasm that delights the crowd.

Ant: Crikey, Tim! Our boy Cav is getting outsprinted in this too! Do you want to round this off with your nomination?

Even Cav wouldn’t nominate himself for this month’s award, so I’m looking slightly left of centre to a rider who gains quiet recognition rather than headline-grabbing glory: Lotto-Belisol’s Adam Hansen. One of the unsung hard-man domestiques whose job it is to put in the hard kilometres on behalf of someone else, Hansen has now started each of the last six grand tours dating back to the 2011 Vuelta – and finished them all, including a brilliant solo victory at this year’s Giro and riding up Alpe d’Huez with a beer in his hand. I know he won’t win our poll, but it’s men like the amiable Aussie who enable those who do win our coveted Rider of the Month awards to grab the glory. That doesn’t mean we shouldn’t recognise him, though. Good on yer, mate!

Ant: Wow! That’s right out of left field, but you make a good point! Now, after a quick check of our elaborate scoring system, I can reveal that the winner this month is …

I may have thought he looked like he was 65 years old during one of his many white jersey presentations, but he certainly didn’t ride like it this month. Yet another great success story from the resurgent cycling superpower that is Colombia – it really has been some year for the South American nation. Who knows, with the Vuelta a Espana at the end of August, we may yet see a Colombian grand tour winner before the year is out! Young Nairo is joined on our VeloVoices podium by Chris Froome and Marcel Kittel, who we couldn’t split and share the third step of the podium. (Kittel’s hair got the second step!)