There had been high hopes that the peloton would be blown apart by echelons, causing fans and riders both heartbreak and schadenfreude in equal measure. The Tour-defining echelon splits would then be followed by a bunch sprint with a Mark Cavendish win. Guess what? Only one out of three happened. 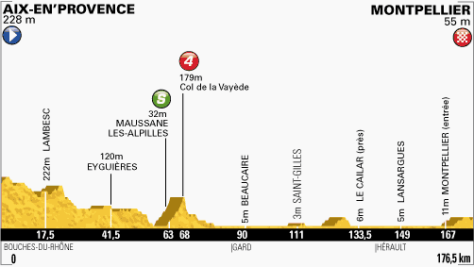 The crazy echelon fear kept the peloton huddled together and moving at a fast pace for the entire day. In fact, teams at the front were pushing so hard, the majority of riders couldn’t get their musettes at the feed zone. They soon saw the error of their ways (can you say “bonking at the 10km mark?”) and brought the pace down for a few kilometres so that everyone could get fuelled up.

There were a couple of crashes near the back, including Mark Cavendish (Omega Pharma-Quick Step), who hit the tarmac 32km from the finish. This made for some kamikaze drafting and bunny hopping to catch back up, aided by a little French diplomacy by teammate Sylvain Chavanel to get the peloton to cool their jets until Cav was safely in the pack. (That said, Chava wears scarves decorated with skulls and his bike is painted like his tattoos – his diplomacy might have been tinged with threat.)

But in the end, we had all the big trains steaming under the flamme rouge with Lotto-Belisol’s Greg Henderson putting Andre Greipel in perfect position to take a decisive win. Second was Peter Sagan (Cannondale), third Marcel Kittel (Argos-Shimano). Cav came in fourth after the OPQS train burnt out before the final kilometre and he was alone – once he saw Greipel go clear, it looked like he had a loss of heart and legs.

The maillot jaune did change hands but that might very well have been by design – Daryl Impey (Orica-GreenEDGE) was up front contesting the sprint while his teammate Simon Gerrans allowed a time gap to form between them. Therefore, Impey moved from second to first and is the first South African to ever wear the yellow jersey.

My rider of the day is Greg Henderson. Not taking away from Greipel’s excellent sprint, but if Henderson hadn’t done what he did, it could have been a Sagan stage. He kept calm, he rode hard and with confidence and in a scrappy, nervy bunch sprint, he delivered his man perfectly for the win. The man knows his stuff.

As there were no major splits today, the GC riders only needed to get across the safely and together for the day to be a success for them. And they did just that. Saxo-Tinkoff, BMC and Sky were most visible on the front for much of the day and their number ones came over the line without incident.

In the points jersey competition, I’m not sure if Cav dropping back once he saw Greipel go was a matter of backing off from disappointment or because he didn’t have the legs after the long chase back. But the real question is: does he think the green jersey is already lost if he didn’t at least try to get the better of Sagan? I’m sure someone will ask him that question one of these days.

There were a few casualties today, however. Jurgen van den Broeck (Lotto-Belisol) didn’t start today due to a knee injury he picked up in a crash yesterday. Nacer Bouhanni (Europcar) called it a day having spent half the stage off behind the cars before climbing off his bike, while Astana lost two more men – Fredrik Kessiakoff and Janez Brajkovic – to reduce their number to just six.

One thought on “TdF stage 6: Greipel mashes it in Montpellier”