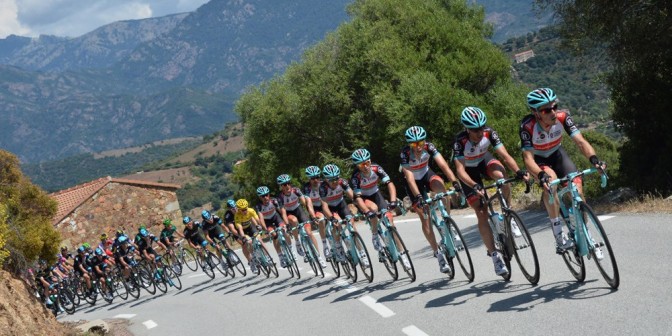 Simon Gerrans snatched victory with a well-timed throw of the handlebars to edge out Cannondale’s Peter Sagan. The-33 year-old Australian has already won stages in all three Grand Tours, but this was the first Tour de France stage win for Orica-GreenEDGE, two days after their team bus wreaked havoc at the finish of the opening stage.

Lieuwe Westra (Vacansoleil-DCM) initiated the day’s five-man break, which splintered on the last climb with Simon Clarke (Orica-GreenEDGE) setting off in pursuit of King of the Mountains points, a competition he won at last year’s Vuelta. But current polka dot jersey Pierre Rolland (Europcar) attacked 2km from the summit of the day’s final climb, the cat 2 Col de Marsolino and crossed first to preserve his advantage.

Rolland led down the descent with Mikel Nieve (Euskaltel-Euskadi), Sylvain Chavanel (Omega Pharma-Quick Step) and Lars Peter Nordhaug (Belkin) but their advantage was always slender and it was game over with 3km to go. Argonaut Tom Dumoulin took a flyer with 2km left but was caught as the Cannondale and Orica-GreenEDGE trains vied for supremacy. The wily Gerrans, led out perfectly by Daryl Impey, held off Sagan in a photo-finish, with Movistar’s J J Rojas a distant third. Race leader Jan Bakelants (RadioShack-Leopard) finished in the bunch to preserve his yellow jersey. 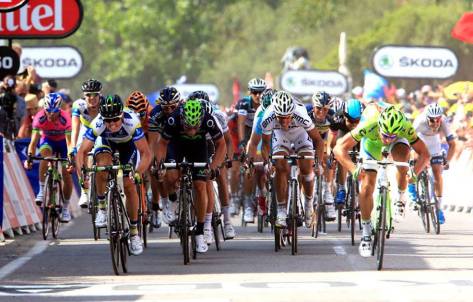 It is a stage that I pinpointed a little while ago and I’m really happy to have fantastic legs and to finish off great teamwork and win the stage for Orica-GreenEDGE.

In the last couple of days I was leading Daryl [Impey] out and we switched it around today. He did a fantastic lead-out for me.
Simon Gerrans

Eurosport’s former pro Dan Lloyd picked Simon Gerrans today, He has a habit of carefully studying the race route, identifying stages or one-day races he thinks he might win and then casing the joint. Today was just such a stage and he adds to his Tour tally which he opened in 2008 at Prato Nevoso.

His move from Sky, where he was largely anonymous, to Orica-GreenEDGE has led to him delivering a series of firsts for the Australian team: first national champion (January 2012), first classics winner at the 2012 Milan-San Remo and now a first Tour de France stage win.

The competition for the major jerseys is heating up. The maillot jaune will most probably change shoulders after tomorrow’s team time trial because there are 71 riders lagging by a single second.

While clearly not at his best following a heavy fall on Saturday, second place for Peter Sagan moved him into the green jersey with a 17-point advantage over Marcel Kittel (Argos-Shimano). In the mountains competition Pierre Rolland, despite his ambitions in the overall classification, clearly sees the spotted jersey as a safer bet. Euskaltel-Euskadi, whom it was today reported are desperately seeking further funding, also have ambitions on the spots, with Igor Anton aggressive on the final climb. And of course Simon Clarke seems keen to add the Tour mountains jersey to his Vuelta equivalent.

Michal Kwiatkowski‘s fourth place today -and fourth overall – has allowed him to retain the young rider’s jersey but there are many tied on the same time as him. If world champions OPQS win tomorrow’s team time trial, will he be adding the maillot jaune to his collection?

With team buses having been sent on ahead to Nice by ferry after the start, we were treated to scenes reminiscent of an amateur race with riders changing in the field at the finish beside small camper and mini-vans.

Amazingly all 198 riders started today’s stage but two were unable to finish: Andrey Kaschechkin (Astana) and Yoann Bagot (Cofidis). Meanwhile Sky’s Geraint Thomas soldiers on with a hairline fracture of the pelvis and OPQS’ Tony Martin looks like an Egyptian mummy.

After today’s stage the only thing we can predict with any certainty is an increase in visitors next year to Corsica.