No rest for the peloton today, as they have to get over four categorised climbs – one cat 2 and three cat 3s, including the Cote du Salario, just 12km from the finish – and a hairy final descent tailor-made for an attacker to slip away for victory. 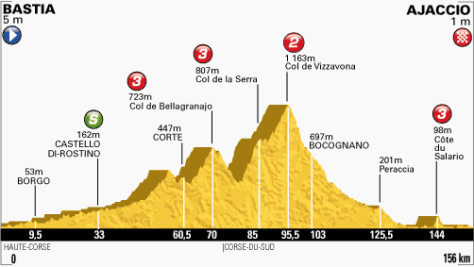 The double punch of the cat 3 Col de la Serra immediately followed by the cat 2 Col de Vizzavona about halfway through the stage will split the peloton up good and proper, giving us an idea of who has brought their climbing legs and who has a ticket on the autobus. This should spell the end of Marcel Kittel‘s stint as race leader. The Cote du Salario is just 1km long but averages 8.9% and the riders have to negotiate a sharp turn at the base of the climb which will kill their momentum. That means both GC riders and aspiring stage winners will be desperate to be at the front at the start of the climb, so expect the pace on the approach to it to be fast and furious.

Depending on the extent of his injuries from yesterday’s crash SuperSagan might very well be able to get over the climbs and come good in the final kilometres. That said, word has it Andy Schleck has done some recon for this stage. Will he try to spring a surprise or will Sylvain Chavanel try to take the maillot jaune today? If Andy wants to win the stage he will need to have sharpened up his renowned poor descending skills, as the road down from the Salario is both narrow and twisty.

Bit of trivia: This is the earliest a mountain stage has been featured in the Tour since 1992.