We’re still not quite ready to say farewell to the Giro, even though our thoughts are starting to turn towards July’s centenary Tour. Here’s another behind-the-scenes report from Sophie Chavanel, physiotherapist at FDJ, who shares her experiences and insights from a challenging Giro.

Hi everyone, I’m back from a very tiring Giro!

All packed up and ready to go

It all started on Thursday April 25th, when I went to Paris for three days of manual therapy training. On Sunday I went to prepare the truck for the Giro. I wasn’t in the best of health because during my little holiday I had hurt my ankle, making it hard to carry all the heavy bottles of water and boxes of bidons. For a three-week race we take 2,400 bidons! In the mechanics’ truck we can store 800. We have another little truck that we use just to go from hotel to hotel, where we put all the baggage and another 400 bidons. We give the others to Italian team Lampre-Merida, and they reciprocate during the Tour de France.

On the Monday afternoon, I went to the supermarket. I know what my riders like to eat and won’t find in Italy. For example: Country Store cereal, chocolate quinoa, Quaker oats, brewer’s yeast, bran, black rye bread and a few small cans of Coca-Cola. Then I ordered some wholewheat and mixed cereal bread from my family bakery, which I freeze in the truck. In Italy it’ s rare you get good bread at the breakfast table – and you know how important breakfast is for the riders.

The start in Naples

Some of FDJ’s support team

I picked up my husband Sebastien, who rides for Europcar, and we went to my parents’ house before I continued on to Naples on Tuesday. I stopped for a night at Grosseto to meet my colleagues with the truck and coach. We finally arrived on Wednesday, just in time for lunch. 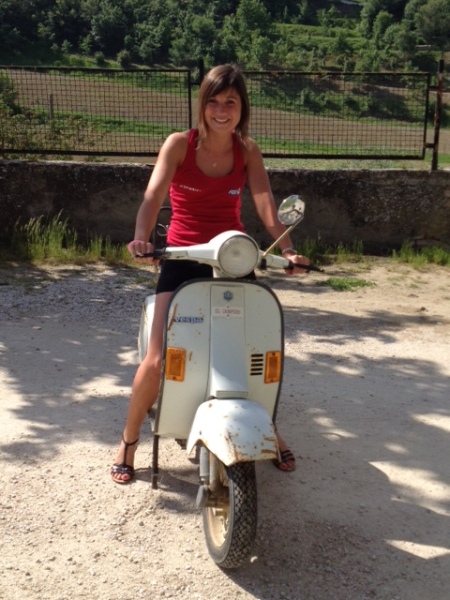 I prepared everything at the hotel before the rest of the team arrived. It’s important to see if the rooms are okay and to order additional sheets and towels for the daily massages. I visit the restaurant to check out the menus but in Italy there is never a problem! It’s always delicious and the pasta is always perfect – al dente. I was happy to practise my Italian because now I have done 30 hours with my teacher I speak well enough to talk to the hotel.

It’s important to feel good in a hotel, to feel welcome. So I think it’s imperative to always be nice to the staff and make an effort to speak their language. We always give them gifts like team t-shirts and caps. Then it’s easier to ask for everything we need! 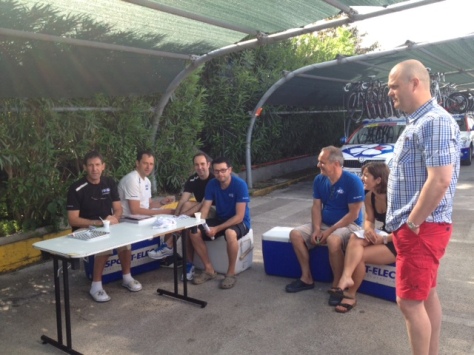 Okay, who’s going to do what?

In the two days before the race starts, we organise all our work. We meet with the team manager. There are two directeurs,  one doctor, three mechanics, one coach driver, Lynda (my friend and roommate), three physios and two soigneurs. The manager decides there should be two staff representatives, one of whom is me and I’ll be responsible for organising who does what and when. For example, Alain will shuttle to and from the hotels during the three weeks with the little truck. He will massage just one rider and look after his every need. Alex and Stephane will prepare all the sandwiches, salads and musettes. 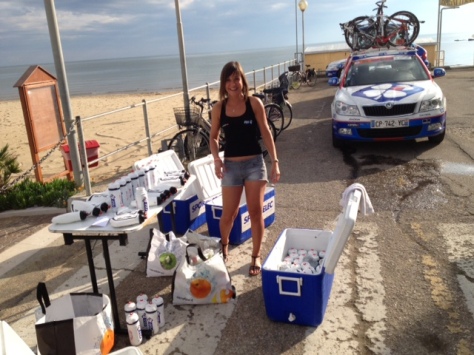 Some of the FDJ bidons and Sophie

Thierry and I will prepare all the bidons and wash the cars. We will each massage two riders. I’ll look after Arnold Jeannesson and Dominique Rollin, and we will take it in turns to look after the hotel arrangements.

The Giro gets under way

At the first stage in Naples we eat pizza and delicious ice cream! And the bad luck begins. Laurent Pichon crashed and was hurt so badly that the Italians became fans because they were so impressed by his courage! It was good for me to speak Italian. We spent one day with journalists from RAI. I was interviewed by Davide Cassani and explained my role in Italian. I was so happy.

I discovered the beautiful south of Italy: Sorrento with its view of Vesuvius, the Amalfi coast. Like I always say: keep yours eyes open. We are so lucky. But the team’s bad luck continued with Sandy Casar’s crash. He broke the scaphoid bone in his wrist. So we lost a rider after just four stages.

Then the rain started and never seemed to disappear! We turned north and drove a lot of kilometres before, during and after the race. Sometimes we didn’t arrive at the hotel until 22:00. We then had to massage the riders, eat and finally sleep. The nights were short, particularly when work started as early as 6:00!

After Pichon and Casar’s crashes, Jeannesson crashed twice and had to withdraw. His back was completely blocked and he had so much pain. Impossible to get better when you have to ride 200km or more in the rain and cold. Then Johan Lebon fell ill and his roommate Francis Mourey was ill too along with their masseur Thierry. Luckily I wasn’t ill, just a bit of a sore throat. 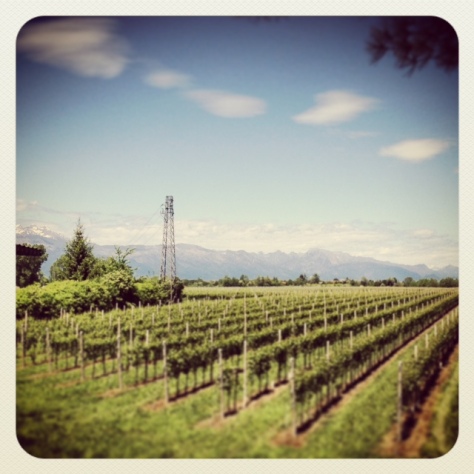 Idyllic countryside and sunshine for the first rest day

The first rest day was important for us. We were staying in the beautiful Prata Di Pordenone in a small family-run hotel. Running in the morning before breakfast, then cleaning everything and then stocking up on supplies, massage for the riders in the afternoon and finally a rest in the evening.

Who’s a lucky boy, then?

We were now ready for the mountains. Those stages were hard with lots of kilometres to get to our hotels but the race was interesting and the landscape beautiful. Nacer [Bouhanni] nearly won a stage and Francis became our leader after eight days working for Sandy and Arnold. After two weeks, Nacer went back home. He is only young and the team didn’t want him to become too tired. The year is long and Nacer has other objectives such as maybe the Tour.

Into the mountains and the snow

Cable car to the top!

Before the second rest day we had a few terrible mountain stages. I remember one [stage 14 – Ed] where we had to go to the finish in a cable car: quite incredible. No one could see the stage because of the fog. We discovered our riders arriving back after a terrible climb, all so cold. There was a hotel for all the riders, they could take their shower and then take the cable car back to the coaches – brilliant.

Because of the snow, the next stage was changed: no Mont Cenis, no finish at the top of the Galibier. Thanks to my previous experiences I always go to a tour with some warm clothes. At Valloire we had snow, snow and more snow. It was beautiful but so cold. We waited at the finish with our little truck so our riders could change and go back to the hotel by car.

Another real rest day in the shelter of the mountains. Work in the morning for us and while the riders took a siesta we all went with Lynda in the cable car to the top of the mountain: such an incredible view. As we now had just six riders, Alexandre, one of the physios, went home. 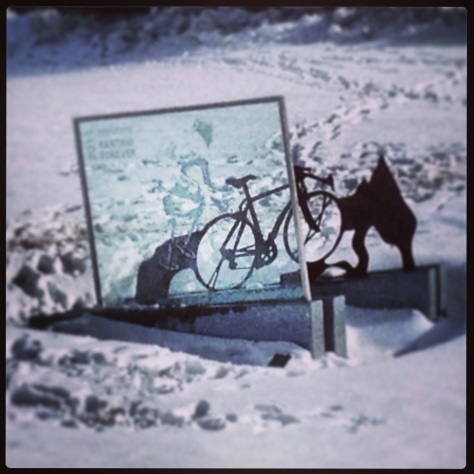 But the bad luck continued. Anthony Roux was so ill he stopped the day after the rest day. Now we had just five riders! The last week everyone worked for Francis who was very courageous. Every day he had a better general classification. The snow was with us every day and RCS, the Giro organisers, decided to cancel the mountain stage [19 – Ed] with Gavia and Stelvio. A wise decision but I was a little bit disappointed. The year before I was at the top of the Stelvio and I was really impressed, it’s an incredible mountain. Without the snow the stage could have been so beautiful.

Stage 20 winner Vincenzo Nibali fights his way through the snow

The day after we were in the Dolomites: again much beauty but so much snow. I have never seen it like that before. The riders appeared like skiers, covered in snow. That morning I had prepared Nutella crèpes and they were very happy to eat them after three weeks of being careful of what they eat.

On the last day the sun was back but the bad luck was still with us! Francis punctured and had to be brought back into the leading group and, thanks to Murilo Fisher and Laurent Pichon, he remained 20th. Finally we all drank a glass of champagne. We had enjoyed four long but beautiful weeks all together, even if there were sometimes little problems. 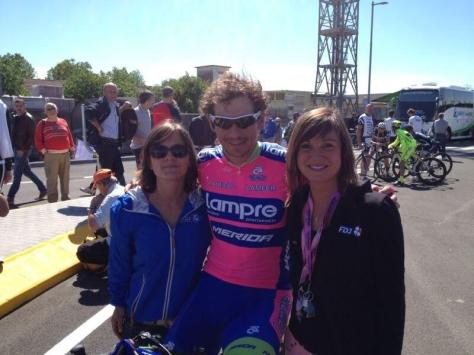 I was back home on the Monday. I loved my Giro adventure, I love Italy and I worked with colleagues I really like but it was very long without my husband. So now we have ten days to be together before the next adventures!

Sophie, thanks for sharing the team’s up and downs during the Giro. Enjoy your well-earned break and we’ll catch up with you after the Tour.