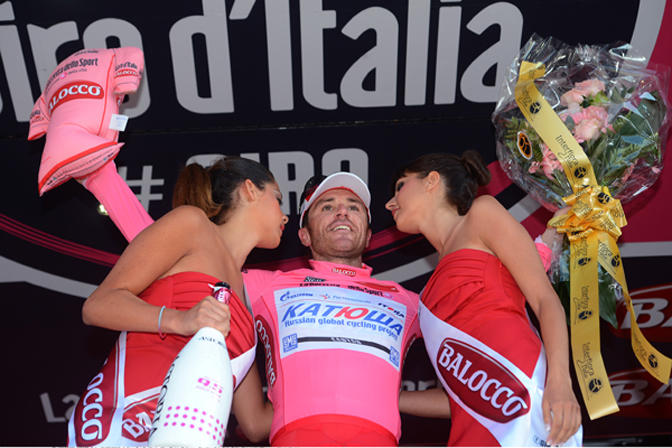 In last week’s Talking Tactics I looked at how different teams’ objectives influence their rider selection for the Giro, depending on which of the many races within the race they are focussing on: general classification, climbing, sprints, individual stage victories and so on. Today I’m following on from that to explore how team tactics can influence the outcome of individual stages, depending on whether their agendas align or conflict – in particular the chain of events which led to Luca Paolini winning a thrilling stage three and taking the overall lead.

First is not the place to be in the first week

For the teams of the GC contenders, the overriding agenda in the early stages of any grand tour is to secure a strong position with minimal energy expenditure. In practical terms, this means being as anonymous as possible on road stages while ensuring no time (or as little as possible) is lost to rivals. In turn, that means being positioned high in the overall standings but preferably not first, as the team of the race leader bears the burden of defending the jersey.

Being the early leader is an honour but also a double-edged sword. The team expends more energy on the front of the peloton, and then there are the added demands of increased media attention, more mandatory doping controls and so on. Some riders don’t cope well in this type of environment. Remember Cadel Evans at the 2008 Tour?

In terms of avoiding the overall lead, a nailed-on sprinters’ stage was a good way to start the Giro for the GC teams. Their agenda in Naples would have been merely to keep their leaders safe from harm and avoid any time gaps. Meanwhile the sprint teams’ objective was to put their men in position to win the stage and take the first maglia rosa.

However, those two agendas were not entirely compatible. The first sprint stage of a grand tour often results in a mass crash because all the sprinters’ teams are keen to lay down a marker. This often leads to three or four trains trying to squeeze into a tight corner at full racing speed. Someone will over-cook a corner, or the over-exuberant use of elbows and shoulders knocks someone off balance, or wheels, pedals or handlebars touch, and before you know it a pile of riders are on the deck.

Sure enough this is exactly what happened, with a crash occurring just over 2km from the finish. The vast majority of the peloton was delayed but the GC teams’ agenda was not overly disrupted as there were no injuries to any of the major players and all time gaps were nullified as the crash occurred inside the final 3km.

Not that any of the GC players had a direct interest in the outcome of the opening stage, but Mark Cavendish‘s win also served their agendas well, at least in theory. Had the victor been, say, John Degenkolb or Nacer Bouhanni, the 20-second win bonus would probably have been insufficient to defend the jersey in the following day’s team time trial, as their teams – Argos-Shimano and FDJ respectively – are noted poor exponents of the art of racing against the clock. (Sure enough, both finished in the bottom five in the TTT.)

On the other hand, Cavendish’s Omega Pharma-Quick Step team are the reigning TTT world champions and, although their line-up here was far from full strength, a motivated Cav’s 20-second cushion gave him a great opportunity to wear the jersey for another day. It wasn’t to be, however. OPQS could only finish 17th, 48 seconds down, and instead the maglia rosa passed on to the shoulders of Sky’s Salvatore Puccio – a great privilege for a ‘home’ rider, but also an unnecessary distraction to his team leader Bradley Wiggins‘ three-week agenda.

OPQS failed in their objective of keeping Cavendish in the maglia rosa on stage 2 (Image: OPQS)

The ideal outcome for Sky would have been to win the stage but for OPQS to finish close enough to keep Cavendish in pink. However, it didn’t work out that way, leaving Sky with the conundrum of how much effort to put into defending the lead on the tricky and tactically challenging third stage.

The power of one

A brief aside. A couple of people asked me over the weekend whether having one outstanding time trialist can really make that much difference in a TTT which, after all, involves nine men. The answer is: yes, because one outstanding rider – Wiggins, Cancellara or Tony Martin, say – has a ‘multiplier effect’ on his teammates.

Here’s what I mean. An exceptional rider can take longer turns on the front without losing performance. This means their own power is brought to bear directly but it also allows their teammates more time to recover between pulls. As a result their performance improves too, and the four least capable members of the team can also contribute for a little bit longer before dropping off. This reduces the amount of time the team must ride with depleted numbers – which is when team performance really starts to deteriorate as individuals’ recovery time is shortened just as fatigue starts to ramp up. That all adds up to a significant accumulation of marginal gains, as Dave Brailsford might put it.

Having unexpectedly inherited the maglia rosa, the ideal scenario for Sky on stage three was to hand it off as quickly as possible to another rider on another team who would happily ride to defend it for the next few days, but without giving up any time to any of the key GC rivals.

As it happened, stage three had the perfect profile to engineer just such a hand-off. A medium mountain stage with a couple of climbs selective enough to get rid of the sprinters and therefore avoid a bunch finish, and with a technical downhill finish to give anyone brave enough to attack a chance of establishing a race-winning gap.

Want to offload that troublesome pink jersey? Have we got the perfect stage profile for you …

That man was Katusha’s Luca Paolini, who led home a smaller than expected group of GC contenders by 16 seconds. When added to the 20-second bonus for winning the stage, that put him into the overall lead by 17 seconds. It was the perfect outcome for the GC favourites. Katusha, having achieved their objective of a stage win, would be happy to ride for the jersey, while Paolini himself is a strong enough climber to be able to deal with yesterday’s late, punchy climb – which he duly did – to not hand the overall lead straight back again. It’s no wonder the favourites were content to give the attack their blessing and not push excessively hard to pursue him. Job done.

That’s not to diminish Paolini’s achievement in any way – the Italian veteran had to have the tactical awareness to recognise the opportunity and then the skill and bravery to execute it – but there’s no question that it was an outcome which suited everyone’s agendas perfectly. Sometimes races are won on pure merit by the fastest, the strongest, the most determined. At others it helps to be aware of whether or not a planned attack fits with other people’s agendas. In Paolini’s case, both factors worked in his favour and that is how, against all the odds, he currently holds the honour of being the maglia rosa.