This edition of the Giro is not hanging around – stage three and the boys are already climbing. Okay, they’re not climbing huge Dolomites or anything but it’s technical from the word go and the two climbs at the end of the stage are sufficient to shell the sprinters out the back.The stage starts with two circuits around Sorrento, before the peloton rides down the glitzy Amalfi coast to Salerno. The middle of the stage is pan-flat until they get to San Mauro Cilento and its early 16% ramps, which is where the twists and turns and ups and downs start. The second climb, the Sella di Catona, has a very tricky 20km descent, which means the sprinters left behind on these climbs will most likely stay behind. It’s hard to believe any of the main GC riders would be taking major chances on the descent this early in the race – indeed Sky may be keen to unburden themselves of the responsibility of defending the overall lead – so the stage will most probably be won by a daredevil all-rounder. 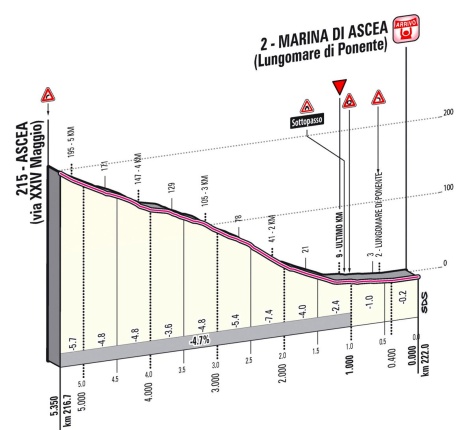