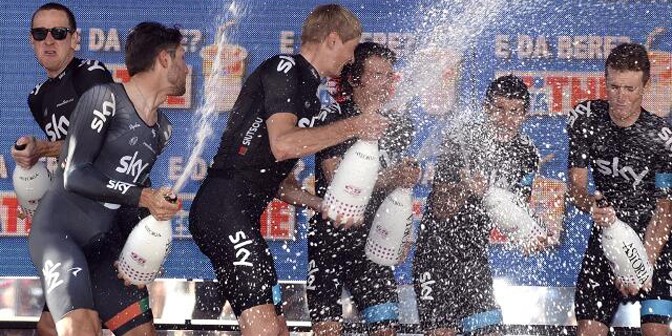 Sky produced a master-class in team time-trialling to take the second stage and put 23-year-old Salvatore Puccio – the team’s best-placed finisher on stage one – into pink in his maiden Giro. Puccio, a former winner of the under-23 Tour of Flanders, was on cloud nine – a pink cloud nine.

The result also placed five Sky riders in the top five overall with Puccio leading Bradley Wiggins, Sergio Henao, Dario Cataldo and Rigoberto Uran. Sky finished the technically demanding course in 22:05, nine seconds ahead of last year’s Vuelta team time trial victors Movistar and 14 seconds ahead of Astana. This was Sky’s second maglia rosa – after Wiggins in 2010 – and it was also the team’s second consecutive TTT victory after the Giro del Trentino.

For an Italian rider to pull on the maglia rosa is one of the best things that can happen to you.
Salvatore Puccio

Puccio was confirmed as the new maglia rosa after Omega Pharma-Quick Step, the team of yesterday’s winner Mark Cavendish, rolled in a disappointing 17th, 48 seconds off the pace.

VeloVoices team of the day

The award goes to not one but nine riders. Step forward Kitty’s Glow-sticks of Vini Fantini-Selle Italia, who punched well above their weight to finish in fifth spot and leave their GC leader Mauro Santambrogio well placed for the battles to come. This was an impressive result as the team finished above a number of teams normally noted for their time-trialling abilities.

TV commentators are fond of saving that grand tours are not won in team time trials but they can be lost. However, they’re all forgetting about last year’s Giro, when Garmin-Sharp won the overall with Ryder Hesjedal and their winning margin in the TTT proved decisive. So let’s have a look at who we think the day’s winners and losers are, starting with the winners.

Sky are the clear victors with both their plan A (Wiggins) and plan B (Henao) handily poised to take a death-like grip on the Giro. We’ll have to wait until tomorrow to see whether they’re going to defend the jersey. GC contenders Benat Intxausti (Movistar) and Vincenzo Nibali (Astana) will be feeling reasonably tranquillo. Time lost today is time they’ll have to win back somewhere, but equally they won’t have to worry about whether or not to defend the jersey tomorrow.

As mentioned above, Vini Fantini will be Haysi Fantayzee [1980s pop culture joke, there – Ed] with their result. Michele Scarponi (Lampre-Merida) will also be feeling pleased to have lost only 22 seconds today. Conversely, defending champion Ryder Hesjedal and Blanco’s Robert Gesink may be disappointed, but not overly troubled, to be respectively 25 and 28 seconds down.

Of course, let’s remember that there’s any number of teams without overall contenders  – most notably the sprint teams – and it looks as though they opted for caution in navigating the tricky course. I suspect, although they’re unlikely to admit it, that BMC and RadioShack-Leopard will be surprised to find themselves and their respective leaders Cadel Evans and Robert Kiserlovski 37 and 43 seconds respectively down on Wiggins.

On the one hand there was good news for Euskaltel-Euskadi, who had to slow down and wait for their fifth rider but didn’t win the wooden spoon (which went instead to the Argonauts). But on the other but the bad news was that of all the GC contenders Samu Sanchez fared the worst: he’s 61 seconds down.