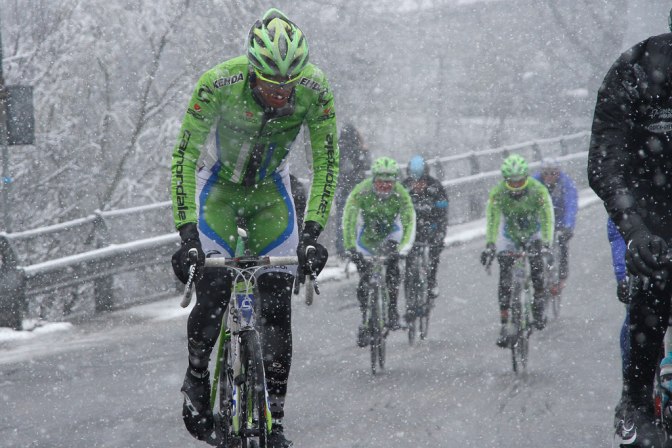 MTN-Qhubeka’s Gerald Ciolek overcame freezing conditions, snow, a mid-race bus transfer which split the race in half and white-hot pre-race favourite Peter Sagan (Cannondale) to prevail in the coldest and harshest Milan-San Remo in recent memory. The 26-year old German sprinter reeled in Sagan within touching distance of the line to win the first Monument of 2013 by no more than half a wheel.

It was a race so epic that we’ve asked both Tim and Panache to share their thoughts on the day’s events.

A six-man break had established an advantage of 7:10 over a (literally) frozen peloton when the race was neutralised after 117km. The Passo del Turchino was deemed too snow-bound to be safely passable. Riders were bundled into their team buses to be relayed to a safe restart point, with several – including a disgruntled Tom Boonen (Omega Pharma-Quick Step) – choosing to call it a day. The net result was a shortened race of two halves. The revised parcours also meant excluding the strategically important climb of Le Manie at two-thirds distance to ensure the race would finish before darkness fell. 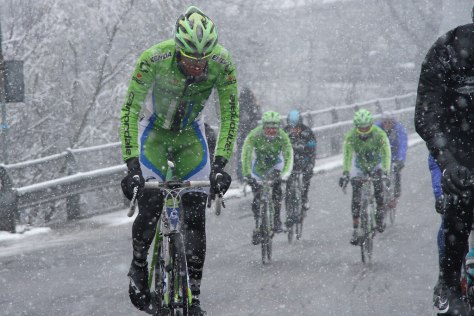 Welcome to the start of Spring Classics season! (image courtesy of Davide Calabresi)

The race resumed with 130km remaining and the peloton set to work reeling in the breakaway. They completed the catch with just over 30km remaining, shortly before the Cipressa, the first of the two decisive hills in the closing section of the race. By then the combination of high tempo and the damp cold had forced several big names out of contention, including 2011 winner Matt Goss (Orica-GreenEDGE), Vincenzo Nibali (Astana) and Thor Hushovd (BMC).

The pace remained fast up the Cipressa, with all the contenders seeking a position near the front of the pack to reduce the risk of being caught behind a crash. Of course, that duly resulted in a crash, with Sky’s Geraint Thomas and Garmin-Sharp’s Tyler Farrar the principal casualties. A five-man group including OPQS’ Sylvain Chavanel attacked, stringing the peloton out into one long line and accounting for Andre Greipel (Lotto-Belisol), defending champion Simon Gerrans (Orica-GreenEDGE) and Edvald Boasson Hagen (Sky). Then on the descent the rainbow jersey of Philippe Gilbert flew solo off the front.

But the world champion could not get away and then was unable to follow a three-man attack of Chavanel, Ian Stannard (Sky) and Eduard Vorganov (Katusha), although the Russian lacked the energy to contribute to the effort. A subsequent series of attacks on the Poggio left six men to contest the final: Chavanel, Stannard, Sagan, Ciolek, Fabian Cancellara (RadioShack-Leopard) and Luca Paolini (Katusha). A nervy Sagan tried one half-hearted attack over 2km out and then opened up the final sprint at around 225 metres. But the wily Ciolek, who had conserved energy by not attacking, came off his wheel and slowly hauled him in, nudging ahead by less than half a wheel to take the first ever WorldTour win by an African Pro-Continental team.

An exhausted and visibly disappointed Sagan held off Cancellara for second. BMC’s Taylor Phinney nearly managed to ride his way across to the leaders from what remained of the peloton, but ran out of road and finished a brave seventh.

After the race, Tim and Panache got together to chat about the race. You can read more of their discussion in next week’s Talking Tactics column, but here are their key thoughts on the race in general.

Tim: Well, that was quite good, wasn’t it? What a finish!

Panache: We’ll remember this race for years to come, that’s for sure.

Tim: First things first. Skipping the Turchino and Le Manie and restarting the race – it was the right thing to do, wasn’t it?

Panache: Absolutely. Missing out Le Manie changed the race, and the shorter distance also affected it, but it was better to do that than have no race at all. When Mark Cavendish found out Le Manie was gone [he was dropped on that climb last year – Ed], his eyes must have lit up!

Tim: Too right – him and all the other pure sprinters. It fundamentally changed the tactics of the race, didn’t it? Tipped the balance, gave the quick guys that bit more of a chance, in conditions which otherwise counted against them.

Panache: It became a very different race, for sure. I’d call it a ‘race of patience’. Philippe Gilbert, for instance – he was not patient enough. He went for it coming off the Cipressa, but that move was a big risk and it didn’t work out for him.

Tim: Yes, maybe he went because he knew Vincenzo Nibali, who is such a great descender, had climbed off?

Panache: Maybe. But Peter Sagan may be just as good, as he showed at Tirreno-Adriatico last week. Even Fabian Cancellara, who we know is a demon descender, was struggling on some of those wet bends, but Sagan just kept motoring.

Tim: And Sagan maybe lacked patience in the final too. That little attack he put in with still more than 2km to go – that was very odd. And then he went too early in the sprint. If he’d held off for another 50 metres, maybe even 25, Gerald Ciolek runs out of road to get by him. But the German got it right, didn’t he?

Panache: Yeah, now Ciolek was patient. He didn’t panic when the attack got away, made it across to the lead group and then was happy to sit in the wheels, knowing his sprint would give him a big chance. Tactically perfect.

Tim: Poor Sagan, though! Ciolek deserved his win – no argument about that – but the burden of being the favourite weighed heavy on his shoulders, didn’t it? Cannondale were forced into leading the chase at critical points in the run-in, burning off Sagan’s teammates, and then he himself had to do a lot of work in the closing kilometres which would have sapped his legs even more. Even then, but for a few inches …

Panache: I think, the way Milan-San Remo is now, it’s almost impossible to win if you’re the favourite and you need to be someone who comes out of nowhere. Look at the last three winners: Goss, Gerrans and now Ciolek. None of them were big favourites coming in. But, having said that, if Sagan had had a teammate to help him in those last few kilometres, he’d have won.

Tim: Ciolek’s become a bit of a forgotten man, and yet he’s still only 26. I remember when he was teammates with Cav and Greipel at what was T-Mobile, he was talked about in the same breath as those two, but it never quite happened for him. You’ve got to be pleased for him, and for his team. I do think you also have to say chapeau to all the guys who took part today in horrendous conditions. When you get that cold and wet there’s just no escaping the misery. Your muscles tighten up and every pedal-stroke becomes a huge effort. It’s no fun!

Panache: In a situation like that it’s as much about mental toughness as it is anything physical. You see tough, strong riders like Goss, Nibali, Boonen climbing off their bikes. That shows you how challenging it is. But what about your man, Cav? That boy is all kinds of tough. Okay, he couldn’t live with the master descenders who got away but he finished ninth and he was just wearing shorts with no leg coverings!

Tim: I’m so chuffed for him. I really hope all the Cav haters remember today when they complain about him just being a soft whinger who’s used to having everything delivered on a plate for him. He came to race today – and that’s what he did.

Panache: Taylor Phnney too. To finish the race the way he did, bridging solo to the leaders and nearly sneaking on to the podium, it makes me think that maybe he could become a big Classics contender in the future. And I was so impressed with Ian Stannard. He kept going and he kept going and he kept going, even though he knew he could never win the sprint. In the right circumstances, he could be a threat in some of the flatter Classics and over the cobbles.

Tim: He’s a big, strong, powerful guy. Sky often use him as the man to shut down breakaways because he’s got that big old diesel engine, so we don’t often get to see him ride for himself. But today he showed just what a talented rider he is. And so to Flanders!