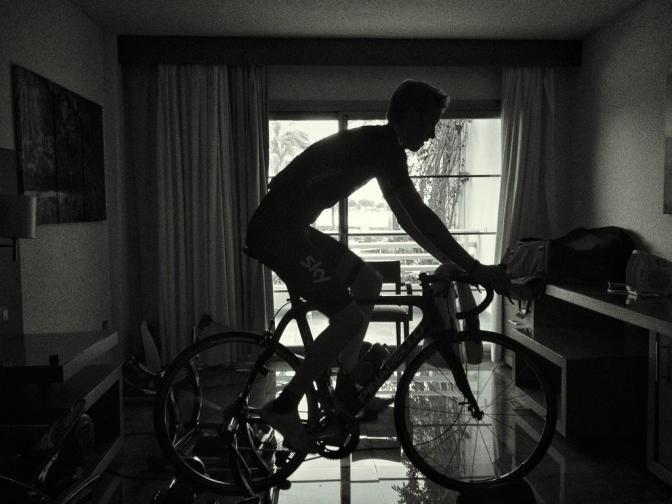 I’m delighted to be able to welcome to the Cote d’Azur Ian Boswell and Joe Dombrowski, two recent Sky recruits who have already featured in VeloVoices. Ian made his Sky debut during the Challenge Mallorca last week, while Joe is scheduled to ride the Tour of Oman next week.

The boys are still settling in and finding their feet in an unfamiliar environment but looking forward to the challenge of a new season, a new team and new roles. Interestingly, the boys independently made the decision to join the team based on a number of similar key criteria – clean, progressive, English-speaking – but, having ridden together as part of Bontrager-Livestrong and the under-23 USA squads, they’re delighted to find themselves keeping one another company at Sky and are relishing taking their careers to the next level.

Sheree: So boys, you’re living the dream! What have the past few months been like for you both?

Ian: Even though I spent time last year as a stagiare with Argos-Shimano, I’m on a pretty steep learning curve. Obviously, coping with the day-to-day stresses of a new and totally unfamiliar environment have added some pressure but, with help from fellow English speakers that we’ve met, and the Sky folks who live down here, we’re getting to grips with all the practicalities, including a lot of day-to-day issues such as shopping and getting visas. Plus, of course, the usual issues of getting used to new bikes and kit.

Joe: I’ve been here for a few weeks and am enjoying the opportunity to experience a new culture but it is draining dealing with all the life changes that come along with the move. There are a lot of things I see as inconveniences because they’re different from what I’m used to. There are so many things you just take for granted at home that you have to set up here and it definitely adds to the stress levels, and can detract from your training routine. For example, I went to sign the 12-month contract for my internet and television service and forgot to take my RIB – bank account details. So I’ve got to go back.

Sheree: Well I suppose it’s only natural that you miss home and I assume there are some marked differences from small town America to living in a European metropolis?

Ian: Yes, where I come from in Oregon no one locks their houses or cars. Last night we left my girlfriend’s bike outside the flat, albeit locked up, and came back down this morning to find the seat post missing.

It’s at this point in the interview I advise the boys never to leave their shiny new Pinarello Dogmas  – which they’ve just washed – out of their sight even for a nanosecond, not even on their balconies, otherwise they’ll be gone.

Joe: We’re also finding it difficult without a car, which back in US is seen as a right not a privilege. So when we shop, there’s a limit to how much we can carry and everything’s unfamiliar. I was feeling peckish on a long ride the other day and went into a small shop to find something to eat and drink. You can get a can of coke and a Snickers bar everywhere in the US. Here I had to buy a bag of small cakes, ate what I needed and brought the rest back.

Then Joe mentioned he’s on a bulking-up programme. (He’s 1.85cm tall and weighs 68kg.) I took the hint and brought out some fruit cake to keep the boys’ strength up. I also explained where I live just in case they feel themselves ‘bonking’ and in need of sustenance when they’re in my neighbourhood. 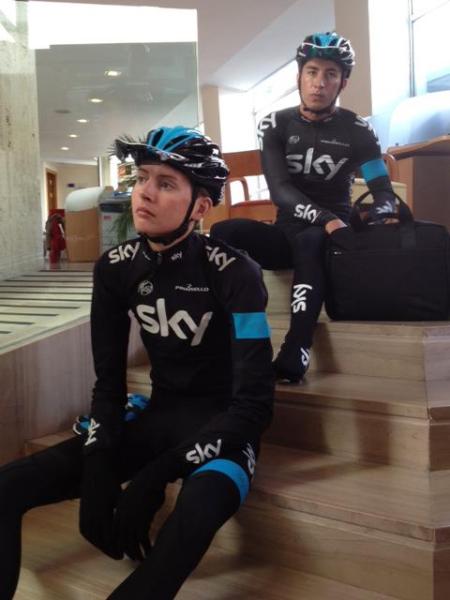 Sheree: Well, I’m delighted to hear you’re settling in but what made you choose Nice?

Ian: Sky is thinking about setting up a base here so it seemed the natural choice for both of us and, as we’ve discovered, there’s quite a large community of other professionals.

Sheree: You’ve been on one team camp before Christmas and you’re about to head off to Mallorca for the next one. How are you settling in?

Joe: We’ve been impressed with how everyone’s treated us. They’ve all been really friendly and the fact that it’s an English-speaking team was a big plus for both of us. One more thing we don’t have to worry about.

They’ve also been very understanding. Ian and I have worked with our own cycling coaches for a long time but that’s no longer possible. Even so Sky flew them over to Mallorca to brief Tim Kerrison who’ll now be overseeing our training.

Ian: Sky has a very integrated and professional approach. They touch base with us on a daily basis and we’re getting the same consistent message from everyone, which is great.

Joe: We were a bit tentative to ask for anything at first but they don’t seem to mind what we ask them, everyone really goes the extra mile.

Sheree: So how would you sum up Sky?

Joe: I think former Sky rider Steve Cummings said it best when he explained “Sky’s a business and BMC’s a family”. They may not be the team for everyone, but they met our criteria.

Sheree: There are some great role models at Sky. How have you found the other riders?

Joe: It’s always a little awkward at first but everyone’s treated exactly the same and there’s no attitude from anyone. I’m thrilled to have been put into the Giro team this year. (Last year Joe became the first American to win the Baby Giro.)

Ian: A couple of the other new riders don’t speak much English yet, but we’ve been able to communicate with everyone. The Colombians are a bit quiet and their English isn’t very good but we both speak a little Spanish. Most of the chatting takes place when we ride, or at the dinner table. We tend to just decompress when we’re in our rooms.

Sheree: Goals for this season?

Joe: Like I said I’m excited to be part of the Giro team where I’ll be riding in support of Bradley [Wiggins] so I’ll be following a similar but lighter schedule starting with the Tour of Oman and Criterium International.

Ian: I’ll be riding in the Challenge Mallorca and then, depending on how things work out, Paris-Nice, Criterium International and Tour of the Basque Country. The team isn’t putting any pressure on us to get results but obviously we want to play our part and help others on the team do well.

Sheree: How would you like to see your careers develop over the next couple of years?

Joe: I’ve not been racing for very long and I want to continue to progress. I need to learn how to ride efficiently in the peloton, become more tactically astute and more rounded as a rider before racing for my own results. We’re both keen to improve our time-trialling abilities.

Ian: I’d like to see myself progressing along the lines of, say, teammate Danny Pate and, with the security of a three-year contract, I have time to explore my options and see how I develop as a rider. We both love racing – it’s too hard a life to do it just for the money. So for me doing well means I’m working well for the team. 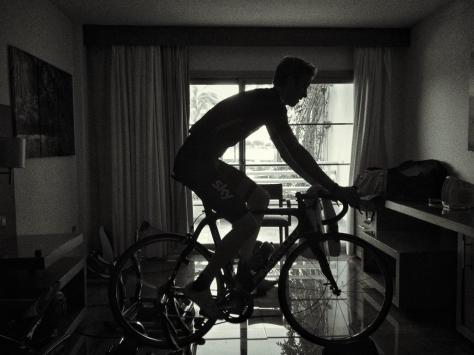 Ian on the turbo in Mallorca (image courtesy of Sky)

Sheree: Imagine that this interview’s taking place in the future and you’ve just retired from the professional peloton. We’re discussing your career highlights, what would you like them to be?

Joe: I like to think that I’ll have had a long healthy career without any serious injuries, that I’ve managed to maintain some balance between my personal and professional life and I’ve made the most of my experiences.

Ian: Hopefully we’ll be enjoying a small whisky and looking back on a successful and happy career where I’ve given my best and enjoyed every moment of the lifestyle that comes with the career path of a professional cyclist.

Sheree: Finally, Ian, I have to ask where’s your pet seal, Siltcoos?

Sheree: Boys, thank you so much for your time. I’ve really enjoyed chatting to you and I’ll be keeping a close eye on you once you start racing. However, with the benefit of age and its accompanying wisdom, can I say you both have the right attitude to go far – the best of luck!

Thanks also to Anton Blackie of Mec’Azur – pictured with the boys above –  and his wife Claire of Cycle Cote d’Azur for helping to set up the interview.

One thought on “Friday Feature: An interview with Sky’s Ian Boswell and Joe Dombrowski”