Today, it’s ‘buy one get one free’ as we’re celebrating both Michael’s 37th birthday and his recent retirement. The latter has not been without controversy as he finally admitted to doping while chez Lance. More about that later.

The GP Montreal was officially his final race as a professional cyclist as the arm he had broken in August started acting up and becoming increasingly painful and swollen around the site of the fracture, plate and screws. In some ways it was more fitting that he should end his career on home soil in front of family, friends and supporters in a race that was won by his teammate Lars Petter Nordhaug.

Michael has long been one of my favourites in the peloton largely because of his eloquence when talking and writing about pretty much any subject – but especially cycling – and his elegance on the bike. His years of indentured service as a domestique made him the perfect team captain on the road. We’ve often seem him leading the peloton for hours on end. If you’ve ever wondered how he and others manage to do it for such lengthy periods, watch him in training being paced by a motorbike in this short video:

While he’s ridden for a number of teams in his 14-year professional career, the last three were spent at Sky where he no doubt imparted much wisdom to the younger riders on the team.

In recent years, Michael’s also compiled a number of videos to assist with training and reconnaissance of key stages in Grand Tours and key races. Like his writing, these articulate better than most the life and times of a professional cyclist. Here are just a few of them:

As I mentioned above after retiring from the sport, Michael confirmed that he doped for a period while riding in the service of Lance Armstrong but has ridden clean since leaving the team and riding firstly for HTC and then Sky.

Michael said he changed his mind on doping after crashing at the 2006 Tour of Flanders. Despite the severity of his injuries no one from Discovery Channel came to visit him in hospital. He claimed this was when it struck home he was taking risks with his health on behalf of people who didn’t care about his health or value his well-being. He left the team in 2006 and started speaking out about the need for clean cycling.

His results, such as they were, have been voided for that dark period, but his few career highlights –  eighth in the 2008 Olympics road race, runner-up in the Canadian national road race in 2001 and 2012, and a stage of the 2008 Tour of Missouri – were achieved clean.

Given that he’s such a wordsmith, it’s only fitting that I should let Michael have the last word. I hope you enjoy your retirement with your young family and please keep writing! 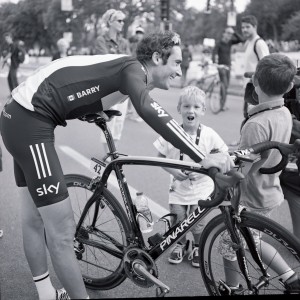 Many of my fondest memories involve the bike but reach far beyond races: riding through the parks with my mother on the way to school, riding with my father, uncle and aunt through Provence, riding with my wife in the Rocky Mountains, and teaching my sons to ride their bikes. On the bike, our relationships developed. That will continue long after I retire as cycling will always be a part of me. Cycling has given me something that reaches far beyond finish lines and race results. Over the last year, as I’ve thought of retirement and reflected on my career, this has become increasingly clear. The racing journey has been a thrill but the cycling journey will continue.