Funny, cruel, odd, personal … you get it all on Twitter. Each week, we’ll have a rundown of some of our favourite tweets. Here are the tweets for the week ending 4th November 2012.

I don’t want all this attention … really!

We’ll start with Bradley Wiggins – Tour de France defending champion (although chances are he won’t defend next year), no doubt soon to be Sir (although would a Mod want to be part of the Establishment?) and reformed tax avoider (news is he has pulled out of that Cayman Islands scheme). But, as we see from the tweet below, he’s quit Twitter…

He never really tweeted anyway, so not sure if we’d have known if someone hadn’t pointed this out.

Now, last week was the unveiling of what looks like a cracking parcours for the 100th Tour de France. A night-time finish in Paris complete with fireworks, twice up Alpe d’Huez, time trials that don’t seem designed to crush the life out of the race the second week in … so much to get excited about! But it was Wiggo’s attire at the presentation that elicited a lot of comment – even a few arguments. 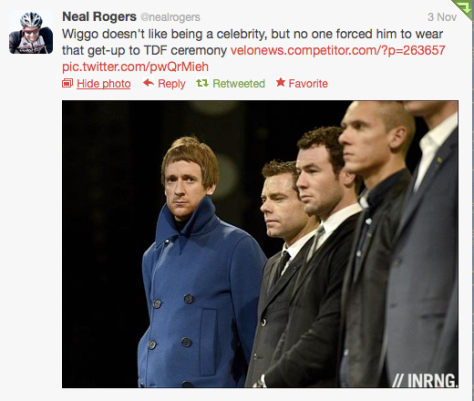 With a haircut like that and a peacock-blue coat while all around him was wearing black – nah, that wouldn’t attract undue attention. It’s a wonder we can even notice him, blending so seamlessly into the background. (Is it just me or does he look like Napoleon?!) Here are some of the horrified reactions…

Of course, in that lineup we also see the recently divorced (from Bernie Eisel) Mark Cavendish, former Sky water-carrier and super-domestique. Looks like Brad has decided that anything Cav can do, he can do better.

While Wiggo’s teammate is swimming with blondes and dolphins.

And now a word from our German riders

I must admit, I was never a Jan Ullrich fan – I never understood why, if you wanted to win the Tour de France, you would come to the race overweight. However, with all the crap surrounding those years coming out of late, my opinion of him has softened quite a bit (I’m sure he’s relieved!) and this picture, which he posted on Facebook, softened my opinion just that much more. He looks really happy, doesn’t he? Good on him …

One German rider who knows about babies is, of course, Jens Voigt. The man is a non-stop baby machine – someone should have told the customs officer.

And a picture of Jens in the airport … LOVE the t-shirt!

And here’s a picture of the god of the Argonauts, Marcel Kittel. I don’t think I need to explain why I like posting pictures of Marcel, do I?

But hey, who knew that tennis superstar (and Mrs Andre Agassi) Steffi Graf won a sprint in the Giro?! 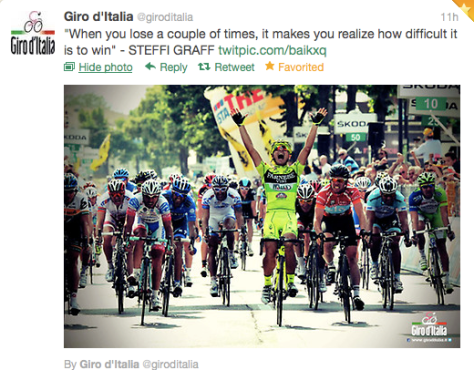 Koen de Kort has convinced the mighty Greg Henderson to participate in Movember as well. They’re on the team Mouthful of Awesome, so give generously. Here’s the progress so far …

Personally, I’m hoping for a Yosemite Sam-like tache on Greg by the end of the month! Remember Dave Zabriskie’s facial ornament from a few years back? Something like that!

Skins walk off the field

Skins, who do a wide range of compression clothing, have decided to sue the UCI for the Armstrong debacle that they feel damaged their brand, which brought out a little discussion from our revolutionaries. The UCI must be feeling really embattled at the moment – Kimmage is suing them, Skins is suing them, fans want to sue them … could get interesting in the next few months, people, very interesting indeed. 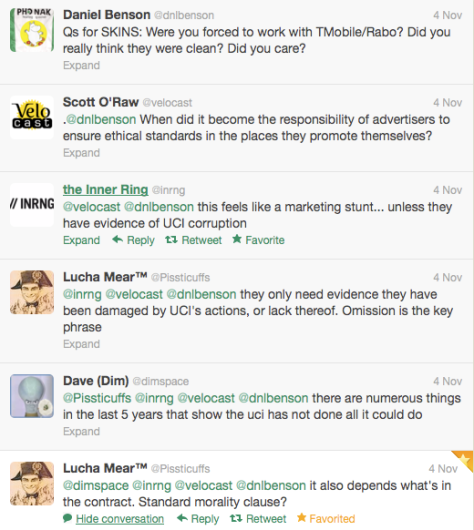 Speaking of cycling clothing, can a cycling jersey be at the forefront of the zeitgeist? If so, reckon Velocast has nailed it. By the way, these really are for sale – and there’s also a lovely line in t-shirts. Christmas is coming up, people. And in the spirit of the UCI, I reckon that with all this free publicity to the tens of fans who read this column, I should be getting a t-shirt in the post as a unrelated merchandise sample …

Oh, unless you count this response. Team Cupcake, anyone? Yes! TEAM CUPCAKE! Somebody make a jersey from that, please!!!

Goin’ to the chapel and we’re gonna get married …

I am a girl, Taylor. And I would marry you… (sigh)

And on that note of wishful thinking, I leave you until next week, tweeties!