The USADA report into Lance Armstrong and US Postal continues to bring new revelations and ramifications, with fervent discussion taking place in the court of public opinion every day. To keep up with the tidal flow of debate, we’ve decided to ask the Twittersphere (and our Facebook fans) for their thoughts in response to specific questions we’ve been puzzling over ourselves.

Our question for today (Sunday) was:

Thanks all for your responses! Be on the lookout for more questions over the next few days …

Earlier this week, the USADA report was released to the public. It was more damning (and detailed) than most of us ever anticipated. As usual with these types of Tweets Specials, this is by no means a comprehensive reading of what is being said on Twitter – I have tried to pull out some of the big issues over the past few days and give as many sides of the argument as I can.

Released on October 10th, the summary of the USADA report ran to 200 pages, while the report itself was a thumping 1,000 pages. The official USADA link to the report is here, and Outside’s cliff notes are here. The fact that the report is so long and comprehensive means that this will be picked over for weeks/months to come and it will almost certainly reach into every aspect of cycling, bringing down more than a few people who are still active in the sport.

There were 11 former teammates of Lance Armstrong‘s who testified to the USADA: Frankie Andreu, Michael Barry, Tom Danielson, Tyler Hamilton, George Hincapie, Floyd Landis, Levi Leipheimer, Stephen Swart, Christian Vande Velde, Jonathan Vaughters and David Zabriskie. Some of these riders posted something on their Twitter page, some didn’t. Here I’ve sorted out some reactions to the testimony.

The link for Christian’s statement is here.

The link for George’s statement is here.

The article about Zabriskie’s background is here. 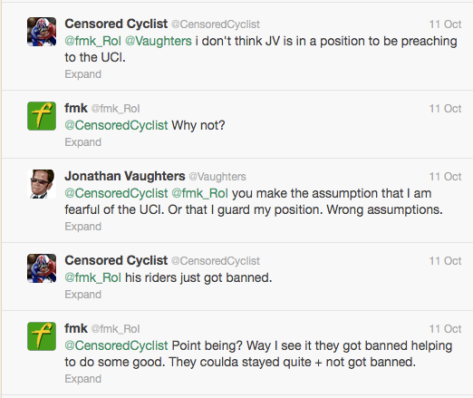 The recriminations, the repercussions and the ramifications

It seems almost every hour there’s another name, another line of questioning, another statement of innocence or guilt. It really is almost impossible to keep up with. I’ve selected a few of the higher profile scalps that have gone due to the USADA report – and those that almost certainly will have to.

We have to start with one of the biggest scalps of all and that is, of course, Johan Bruyneel. His statement is here. He says he left of his own accord; other reports say he was fired. 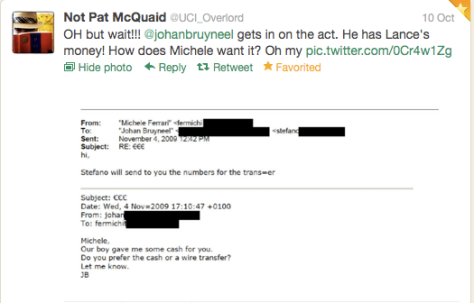 Matt White, who was key to putting together the Orica-GreenEDGE team, stepped down from his management role with the team and as a selector for the Australian national road team after he was linked to doping through Floyd Landis’ testimony to the USADA. His statement is here.

One of the biggest losers in this week’s PR battle was Team Sky and their interpretation of ‘due diligence’. They have fallen foul of their own much-publicised stance of ‘no one involved in doping at any point will be tolerated on the team’. Not only did Michael Barry give evidence as one of the 11 riders (gracefully retiring from Sky before the testimony became public),  but questions were also being asked about Michael Rogers, as he was named in the USADA report concerning his links with Michele Ferrari. Background article on this is here.

Considering Sky’s stance on riders or personnel who have the shadow of doping over them, it will be interesting to see how this plays out. Especially as Brailsford also has to deal with the Sean Yates question – although his past was hardly unknown when the team started (check Wikipedia). Yates did a radio interview and, basically, made a hash of it. The audio link is here. And this is what his statement reminded a few people of. 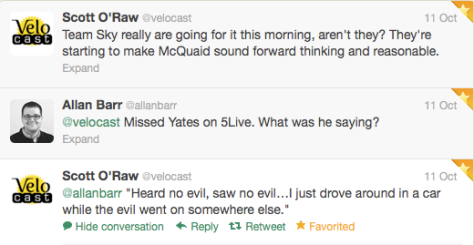 The Telegraph article that has been referenced in the above tweets is here.

But it doesn’t stop there. Note this exchange regarding Kim Andersen, who now takes over the reins of RadioShack, and Neil Stephens for Orica-GreenEDGE: 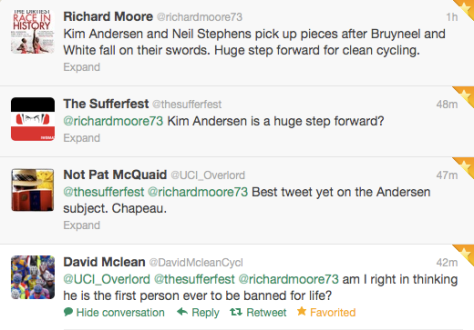 And we also have Alexandre Vinokourov and Viatcheslav Ekimov  moving into management positions with Astana and Katusha respectively.

Of course, we also have Bjarne Riis, who has been implicated in Tyler Hamilton’s book, as well as in David Zabriskie’s admission of his doping while at CSC. As someone said to me the other week, the rabbit holes go very deep.

What the other riders are saying

There was much consternation in the Twittersphere about the lack of current riders rising up to condemn Armstrong and out other riders they know to be doping. While not being an apologist for those who keep the omerta, not being a part of that world, how can we possibly know what goes through a cyclist’s mind when confronted with this? The USADA report clearly details riders losing their jobs, being shunned and bullied, for speaking up. Hopefully there’s power in numbers now and more riders will speak up but, until then, let’s cut them a little slack. That said, there were some riders who did make statements and engage with fans, both young bucks and old hands. Let’s start with Taylor Phinney.

Marco Pinotti has always been outspoken when it comes to the subject of doping and has always worked to ensure transparency around his training and his performances, and this is perhaps one of the best examples of how the doping culture helped rob him of results. A man of quiet integrity.

Jens Voigt also had a few things to say. 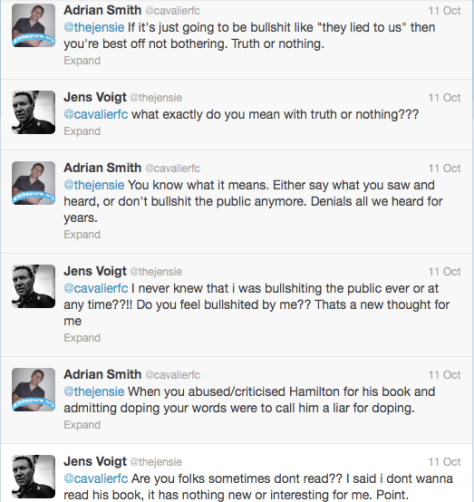 Bradley Wiggins did an interview and put his thoughts forward – and it was quickly noted that he had a selective memory. The Sky Sports interview is here and here are more comments. 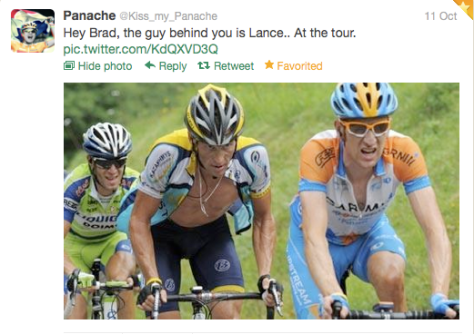 The humorous and the heartfelt 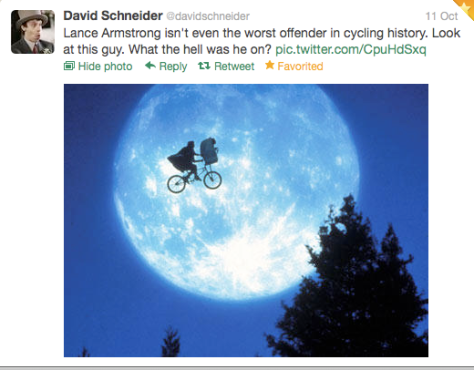 No doubt there will be more Tweets of the Week specials as more revelations see the light of day. But in the meantime, I’ll leave it to @TourDeJose and @DeeDee315 to say what I certainly feel – and I hope you all do too.