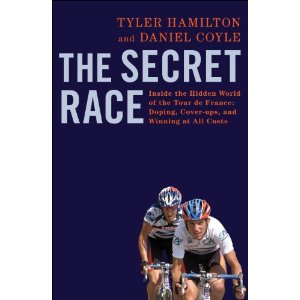 As Tyler Hamilton relates it, ‘not normal’ was one of Lance Armstrong‘s stock phrases for commenting on something unexpected or out of the ordinary. In that vein – now there’s a doping-related pun for you – The Secret Race is not a normal autobiography. Nor is it a normal tell-all exposé. It isn’t even a normal confessional.

So what is this book? It is a no-holds-barred account which shatters the omertà, the code of silence, which has hung over cycling for decades like a thick fog and provides revelation upon revelation about the extent to which doping infected cycling during his career.

This is an autobiography in name only, as it defies most conventions of the genre. The cover features not the traditional head shot of the subject, but a smaller image of Hamilton racing against Armstrong, recognising the truth that this book is as much about Lance as it is about Tyler. There is no selection of childhood-to-retirement photos gracing the middle pages. And, after Armstrong, the most frequently referenced person in the text is Edgar Allan Poe – ‘Edgar’ being the riders’ code for EPO. (E Poe, geddit?)

Details of the nefarious practices employed both within Armstrong’s US Postal squad and the wider peloton come thick and fast. At times the narrative reads more like something out of a spy novel. Riders take ‘red eggs’ (testosterone). They talk in code using pre-paid (and therefore untraceable) mobile phones. A motorbike courier – nicknamed ‘Motoman’ – is used to ferry drugs to riders when needed. Blood bags are concealed in soy milk cartons in the back of a fridge. Used syringes are casually discarded in Coke cans. Armstrong and US Postal team boss Johan Bruyneel are accused of employing strong-arm political tactics to suppress positive tests and exert untold power over the entire sport.

The book takes us chronologically through Hamilton’s three years with US Postal and his subsequent stints with CSC-Tiscali and Phonak, through to his Olympic gold medal-winning ride and subsequent fall from grace, but it is less about the racing and more about the hive of activity surrounding the riders’ ‘training’. The 2002 Giro d’Italia, where he coped with a broken collarbone by grinding his teeth down – he needed to recap 11 of them afterwards – is glossed over almost as an afterthought but is testament to Hamilton’s uncanny ability to endure and embrace pain.

Similarly, his stage-winning ride in the stage from Pau to Bayonne in the 2003 Tour de France – a mammoth solo effort, again with a broken collarbone – is dealt with in matter-of-fact fashion. It was a victory widely considered to be one of the greatest solo rides in the Tour’s history, and one that most fans – myself included – still talk about in reverential tones. And yet, as Hamilton reveals, it was an achievement fuelled by an illegal blood transfusion.

And this is the crux of the matter for the reader. How does this book make you feel?

It left me feeling conflicted. I was simultaneously appalled and enthralled. Hamilton pulls no punches. His tone is neither apologetic nor begging forgiveness, merely factual and honest (a Hamilton family trait, as he explains up front). As such, by not looking for sympathy, I finished the book feeling nothing but sympathy for him. He comes across as an uncomplicated man, one who is fully aware that he reached a crucial decision point early in his career and – like many, many others – chose to dope to compete at the highest level. It was wrong. He knew it was wrong. But, as he himself posed during his infamous 60 Minutes interview last year: what would you do? If one is being truly honest, it’s a difficult question to answer.

Guided by the expert hand of Daniel Coyle – an author who once spent a year following Armstrong at close quarters to research a book about him – The Secret Race takes us through Hamilton’s career, his complex relationship with Armstrong and the substance of the seven-hour testimony he gave under oath in 2010. It’s a damning account of systematic deception and the extraordinary sleight-of-hand riders employed to avoid detection, and points the finger at many significant names in the sport both past and present – sometimes obliquely, at others in plain black-and-white. Let’s just say that Messrs Riis, Basso, Ullrich and Valverde (among others) will not be pleased.

Critically, Hamilton comes across as a credible subject. This is not hack-job tabloid sensationalism but factual testimony which lays bare a web of corruption which reached out across the entire peloton, with Armstrong the mother spider at its centre. Hamilton acknowledges that he will be seen as both hero and villain by people, while seemingly accepting that he is probably more of an anti-hero.

But at its core, The Secret Race is not about heroes and villains. It is a tale of highly competitive people who make choices about how far they will go to win. If you are a genuine fan of cycling, if you want to have your eyes opened about the sport’s dark underbelly, you must read this book. It really is ‘not normal’ – it is quite, quite extraordinary.