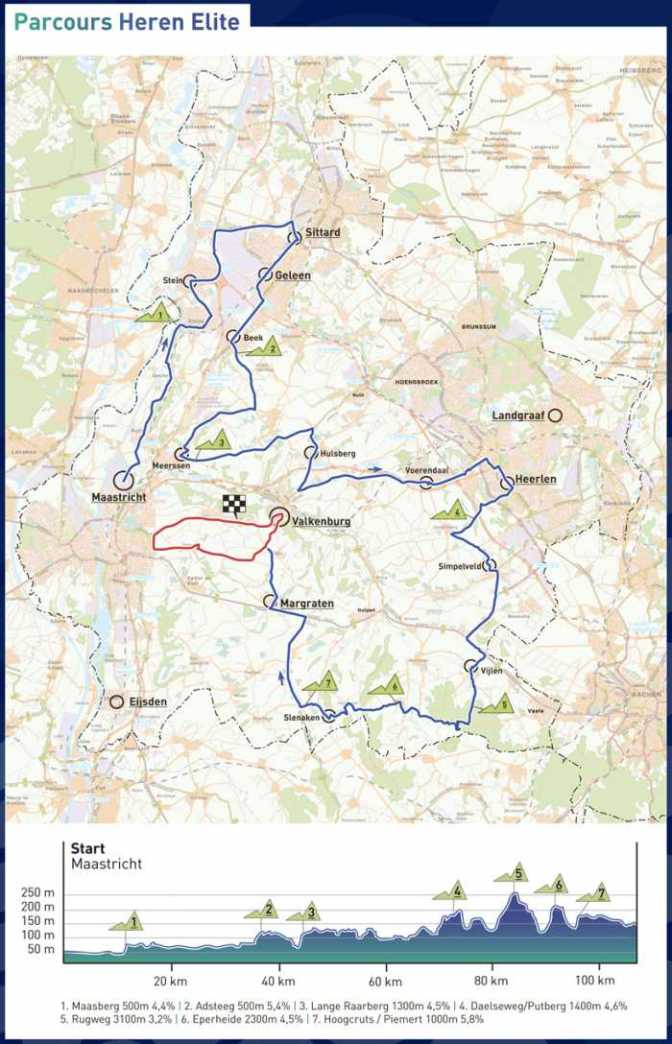 The World Championship road races start tomorrow (Friday) and conclude with the blue riband men’s elite event on Sunday, the climax of eight days of highly competitive and entertaining racing which started with the reintroduction of the trade team time trials.

The winners of the road race gets to wear the rainbow jersey for an entire year in every road race and road stage in which he/she participates. The men’s under-23 champion usually gets signed to a WorldTour squad and is no longer eligible to wear it.

The event is usually raced on a circuit to maximise the viewing pleasure for the thousands of spectators who flock from all over the world to watch and, for the men’s elite race, the distance is generally that of a Classics race, approaching 300km. The juniors, under-23s and women’s races are all much shorter events. While the parcours varies from year to year, race winners tend to come from those nations which have the larger teams thanks to the performance of their riders on the UCI’s various Tours. However, that’s not always the case as Thor Hushovd was part of a three-man Norwegian team in 2010 when he won.

The most recent winners of the event are:

Don’t you just love it when a plan comes together? Last year the British team gave Mark Cavendish an armchair ride almost to the finish leaving him to nimbly and powerfully jostle his way across the line to victory, a gold medal, the hallowed rainbow jersey, BBC Sport Personality of the Year and a place in history as the first British winner (and only second overall) since Tommy Simpson in 1965. According to David Brailsford it was all down to three years of planning and preparation, proving my point that you can never do enough of it.

Great Britain and Germany combined to pace the peloton and man the fort against multiple attacks.With eight laps to go a second breakaway formed, which would eventually bridge across to the leaders. Two laps later, a crash caught out a number of contenders leaving the back of the field in total chaos. GB drove what was left of the peloton, preventing the second group from rejoining.

The attacks now came thick and fast. One including Lars Bak (Denmark) not unnaturally delighted the locals. With two laps left, most of the escapees were brought back except Roux. Thomas Voeckler (France) attacked, Nicki Sorensen (Denmark) and Klaus Lodewyck (Belgium) followed. On the final lap, Johnny Hoogerland (Netherlands) bridged to the lead quartet while Britain’s Bradley Wiggins put in a monster turn to drag the field up to them. Finally, the break was overhauled by the parallel British and Italian trains.

The final few kilometres looked chaotic as countries surged forward swamping GB and putting Cavendish in the gutter but he spotted a gap on the barriers, wriggled through it and surged across the line ahead of an accelerating Matt Goss (Australia) who ran out of road. Andre Greipel (Germany) threw his bike across the line to snatch third and deny Fabian Cancellara (Switzerland). 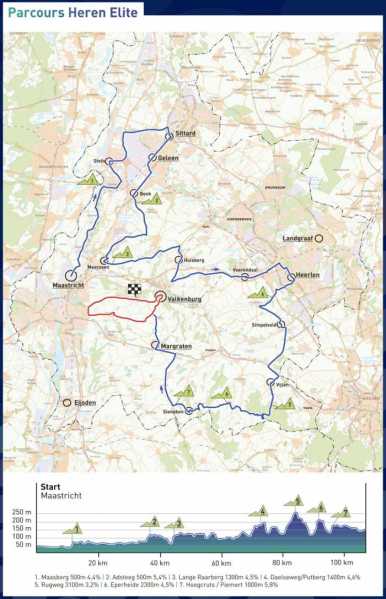 The 2012 edition will be more testing than last year’s, which was run on a gently undulating circuit. With the exception of the men’s elite road race, the others will be raced entirely on a 16.1km circuit. The first 106km of the men’s elite road race will take place through the rolling hills of the beautiful Limburg countryside – similar to the 2010 route from Melbourne to Geelong. Only after that stretch will the riders face ten laps of the 16.1km circuit that is largely the same course as was used in the 1998 World Championships in Valkenburg. As in Amstel Gold, the elite men’s road race will start in Maastricht and finish on the Cauberg in Valkenburg.

The technically demanding preliminary course for the men’s elite race is the same as the first part of the Amstel Gold and features in total nine hills, not all of them classified. While they’re not long or difficult they will serve to tire the legs ahead of the ten ascents of the two climbs on the circuit. Bemelerberg Hill is a demanding, winding 900m climb with an average gradient of 5% and a  maximum of 7% and the (in)famous make-or-break Cauberg – 1.2km long with an average gradient of 5.8% and a  maximum of 12%. But don’t forget the finish for all of the races is located 1.7km beyond the Cauberg’s summit. This gives the course a quite different complexion to that of Amstel Gold.

It’s not the type of terrain on which he excels, but defending champion Mark Cavendish has promised that he will do justice to the rainbow jersey right to the very end. 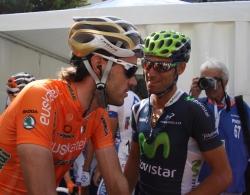 Could this be Spain’s year again? (image courtesy of Susi Goetze)

While the race comes at the end of a season made longer by the Olympics, there are a number of riders who still have fresh legs. I’m thinking of the Spanish squad, chock full of explosive climbing and sprinting talent, any one of whom could win: Alberto Contador, Alejandro Valverde, Joaquim Rodriguez, Dani Moreno, Samuel Sanchez and three-time world champion Oscar Freire.

Philippe Gilbert, a two-time winner of Amstel Gold, is another man coming into form at just the right time, as we saw with his two wins in the Vuelta a Espana and his impressive performance in the team time trial. He will have internal competition from 2005 world champion and current King of Belgium Tom Boonen, whose confidence will be sky-high after Omega Pharma-Quick Step won the team time trial, relegating Phil Gil’s BMC into second place.

What about the local boys, the Dutch? They have a team packed full of talent, most notably Robert Gesink, Laurens Ten Dam and Bauke Mollema but if I were a betting gal, I’d say bottom step of the podium at best. [I’m a betting man and I’d say that’s erring on the generous side – Ed.]

The Italians have double world champ Paolo Bettini guiding the team and their main threat is a lime-green double-header: young Moreno Moser and experienced Vincenzo Nibali. Let’s also not ignore the in-form Simon Gerrans (Australia) and the young guns in the American squad, Tejay Van Garderen and Andrew Talansky? And could the talented but inexperienced Colombian squad spring a surprise? Ignore them at your peril.

The younger generation have a couple of other likely candidates: the prodigiously talented Slovakian Peter Sagan and the shy and retiring (but equally effective) Edvald Boasson Hagen. They are riding on smaller squads – six for Sagan and three for EBH – but if they can stay with the leading group, they might just slip away at the end while the rest calculate whether or not to chase.

Finally, let’s not forget Team GB. Cavendish will not retain the jersey but GB might control the peloton again, this time for recent Tour of Britain winner Jonathan Tiernan-Locke or maybe Chris Froome who dropped out of the time trial to maybe save himself for this. Frankly, pretty much most years it’s a hard race to call and any number of riders are in with a shout. But I can promise you it will be an absorbing race of attrition.